Fan Perception: What We Learned About the Browns' Special Teams Heading Into Training Camp

Share All sharing options for: Fan Perception: What We Learned About the Browns' Special Teams Heading Into Training Camp

In each of our training camp previews, we conduct a poll at the end of the post. The polls are intended to gauge fan perception about certain players or roles on the Cleveland Browns heading into training camp. They help set the initial expectations that fans have on certain players. Here is a summary of each of those polls for the special teams positions:

Assuming both stay injury-free, will Billy Cundiff and Spencer Lanning last the entire 2014 season for the Browns? 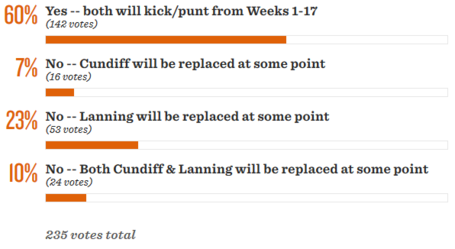 Only 60% of fans believe that both Billy Cundiff and Spencer Lanning will make it through the entire season. When you get deeper into the results, more people actually believe Lanning will be the person who gets released. The value could be viewed that at worst, at least Cundiff can still do well on kickoffs, whereas Lanning's mediocre production could be substituted for a better player. [Read Part 1 of the ST Preview]

Who should return kickoffs for the Browns in 2014? 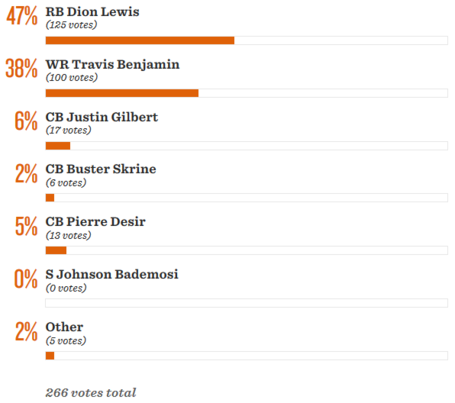 Almost all of the support went to RB Dion Lewis or WR Travis Benjamin. I haven't thought about Benjamin being used on kickoffs much this year, but if he's not in the cards at wide receiver, it would make sense. Benjamin had 3 kickoff return attempts last year, and he took 1 of them back 86 yards (but short of a touchdown), so if he's durable enough, there's no doubt he's a threat. Otherwise, Lewis would be the dependable option. [Read Part 2 of the ST Preview]