Fan Perception: What We Learned About the Browns' Secondary Heading Into Training Camp

Share All sharing options for: Fan Perception: What We Learned About the Browns' Secondary Heading Into Training Camp

In each of our training camp previews, we conduct a poll at the end of the post. The polls are intended to gauge fan perception about certain players or roles on the Cleveland Browns heading into training camp. They help set the initial expectations that fans have on certain players. Here is a summary of each of those polls for the cornerback and safety positions:

Do you think CB Leon McFadden will make the 53-man roster?

This was probably the closest to a split decision we had all of camp. We might know his fate early on -- if Pierre Desir performs well and Isaiah Trufant is given the respect of more reps, then there really isn't much space for Leon McFadden. [Read Part 1 of the CB Preview]

Who will start at cornerback opposite Joe Haden in Week 1?

I feel like this was one of the rare times in which my training camp write-up did not influence the vote as much as I anticipated. I believe Buster Skrine will end up starting to open the season, which will be more of a credit to him than a disservice to Justin Gilbert. Either way, though, it's not really a big deal whether Skrine or Gilbert start in Week 1. [Read Part 2 of the CB Preview]

If you could only keep one backup safety on the Browns (and the rest would be cut), who would you keep? 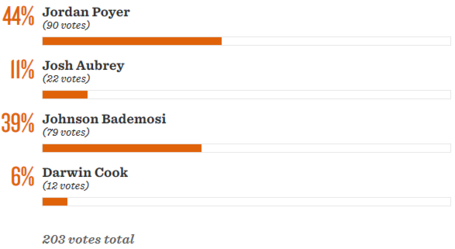 I wasn't sure how the results would turn out for this one. It was a tough decision to only pick one player, and I think a lot of people went with Johnson Bademosi for his special teams abilities. That's not a bad reason. After all -- when you look at snap count percentages, the starting safeties often play 100% of the snaps in a game. Therefore, in this case, you can see why a special teamer would get a lot of votes. [Read the S Preview]