Let's take a quick look at some pictures from last night's game to see what they can tell us.

Hey there folks, I'm taking some time to walk through last night's game and though I would share some pictures with everybody to help illustrate what went right and what went wrong. This is not meant to be a comprehensive recap or anything, just a few quick thoughts with some examples. In part one I'll be going over the offense, with a heavy focus on the first and second teams. Sorry Tyler Thigpen.

First let's look at Brian Hoyer's second play from scrimmage. On second down with six to go, Hoyer hits MarQueis Gray in the flat for a 28 yard pickup. Awesome right? Yes and no. The play starts with Hoyer dropping back and looking down the middle of the field. After a second or two he immediately turns and checks to Gray. But take a look at this. 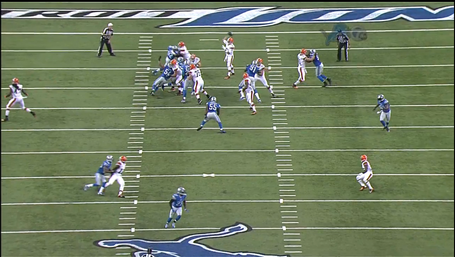 That player at the bottom right is Andrew Hawkins, sitting wide open twenty yards down the field. That's right where Brian Hoyer was looking before deciding to dump it off to Gray. Obviously the play worked out, and I don't claim to know Hoyer's progression, but I have a hard time believing it was to stare at Gordon for two seconds then dump it off.

Let's take a look at a run by Ben Tate two plays later. After an eight yard gain on first down, the Browns continue to pound it. This run only goes for four, but I think it's a perfect example of what rufio talked about here. Tate takes the ball on what looks like an outside zone left, and cuts "back" up field behind right tackle Mitchell Schwartz. Notice the wall of white jerseys collapsing the defense toward the top of the screen. Expect to see this a lot from now on. 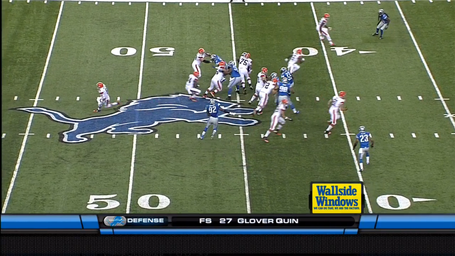 On this final example from Brian Hoyer, you can see some other elements that rufio talked about in his article on the outside zone. Hoyer fakes the handoff, and rolls to his left. This is the kind of play the Browns need to run to keep defenses honest. Notice how the defense has over-pursued and leaves Hoyer plenty of space. This type of play will be very important for the Browns this season, and it's nice to see that Hoyer is capable of executing it. He gets his head turned around and makes a nice throw, which unfortunately Miles Austin drops. Still, this should encourage Browns fans, even if the result wasn't what we wanted. 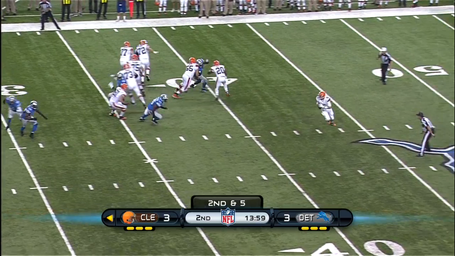 Now for the part I'm sure you're all waiting for, Johnny Manziel. First the bad. On his first pass as a pro Manziel connects with Anthony Armstrong for a six yard gain. That's good, but one of Manziel's issues from college follows him to the pros. Manziel has a reputation for not always stepping into his throws, and you can see here he's fading away from the thorw, even though he has a clean pocket. This keeps him from getting a lot of zip on the ball, and in the future could result in tipped passes or interceptions. 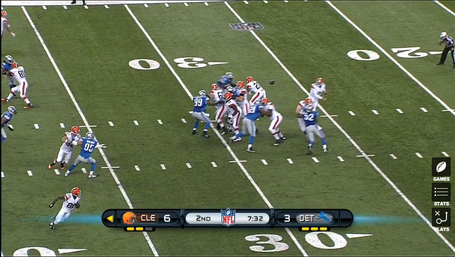 Now for the good. Perhaps the biggest question so far for Manziel is how quickly he will pick up the playbook. This next play is a positive indicator. On third and five, Manziel hits Charles Johnson on a quick hitch for a seven yard gain and a first down. The best thing about the play is when Manziel makes the throw. He's already made his decision and thrown the ball before Johnson comes out of his break. He doesn't wait for his receiver to come open, he knows what is going to happen and he's able to make a perfect throw in rhythm. If Manziel can do this type of thing consistently he'll be in good shape. 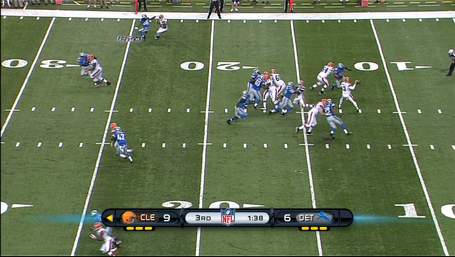 This final play is from Tyler Thigpen and the third/fourth teamers. Screen plays have been completely absent from the Browns offense in recent years. On this play the Browns are trying to set up a screen to Charles Johnson, and things are looking perfect. There are four linemen and a fullback out to block, and only three Lions near the ball. This is going to be a huge gain. Then the ball is knocked down before it can get to Johnson. Thigpen needs to get this ball through to his receiver. This is an example of how throwing from different angles can be helpful to a QB. If last night's game is any indication though, expect screen passes to finally be a part of the Brown's offense. 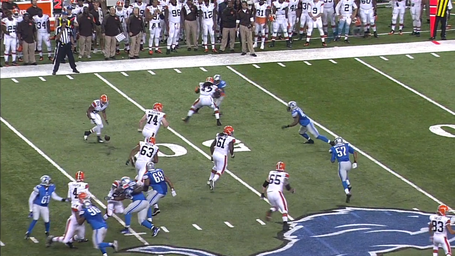 So all in all, the offense looks rusty. There were lots of little mistakes and missing details. But the framework is there. The team looks able to run the ball behind the starting line using the outside zone, and we caught glimpses of what can happen when a defense over-commits to that. There's a long way to go, but football is back people, and it's shaping up to be a fun season.

Cleveland Browns vs. Detroit Lions - Week 1 of the NFL Preseason