What Would the Browns Look Like with All Hometown Players?

Save for Brian Hoyer, the Browns would look decidedly different if only Ohio players populated its roster.

Ohio justly prides itself as a football hotbed.

The state has given birth to football legends such as Paul Brown, Don Shula, and Woody Hayes. Miami University proudly touts itself as the "cradle of coaches," having nurtured Earl (Red) Blaik, Ara Parseghian, Bo Schembechler, Hayes, and Brown. The Pro Football Hall of Fame sits in Canton.

So what would the Browns look like with the best talent from across the state of Ohio, save for the Cincinnati area?

According to BestTicket.com's Andrew Powell-Morse, the Browns would look different, but wouldn't be half bad. 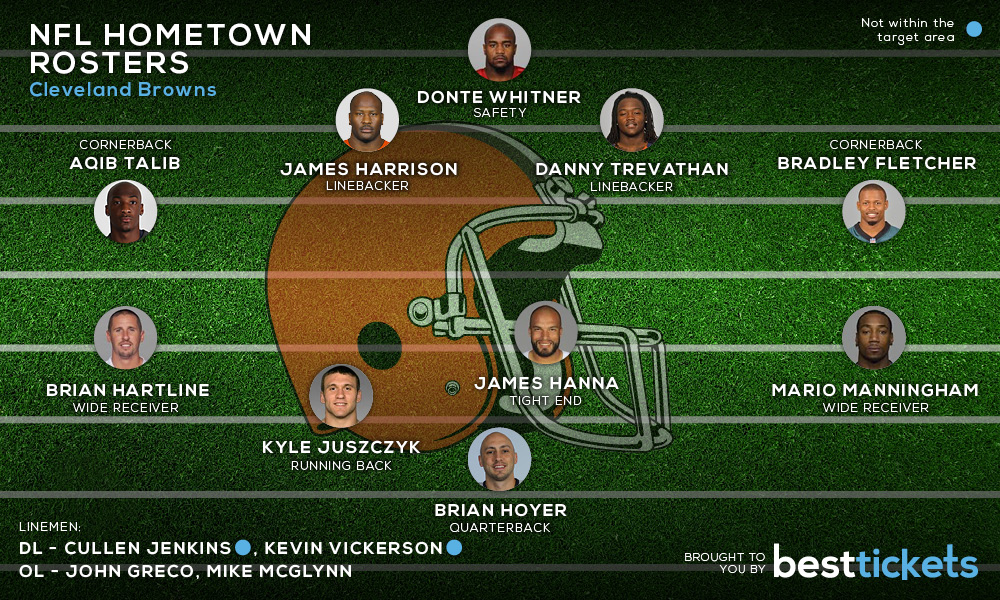 Originally, the author made the grave mistake of placing Brian Hoyer with the Bengals. After receiving a horde of comments, Powell-Morse quickly moved the North Olmsted native to the Browns, where he obviously is today.

Only one other player in this diagram, Donte Whitner, is currently on the Browns roster.

Since some teams didn't have enough players from the surrounding area to fill all of their roster spots, the author had to combine some teams and fill in spots with players from different areas. Players who do not appear in the picture above for the Browns, but should, include WR Ted Ginn, Jr. (Cleveland), WR Cecil Shorts III (Cleveland), WR Nate Washington (Toledo), WR Dane Sanzenbacher (Maumee), CB Charles Woodson (Fremont), and NT Barry Cofield (Cleveland). Unfortunately, Ben Roethlisberger should also be on this list with the Browns (he grew up about 30 miles closer to Cleveland than Cincinnati).

Given the above roster of players, plus those who should be on it, the Browns would actually be a pretty good team. There's plenty of weapons for Hoyer on offense, plus a very solid defense in place. That secondary could do some damage. There would definitely be a need for some linemen on both sides of the ball, but you could always look to trade with Wisconsin for big men (Joe Thomas, JJ Watt, etc.).

One other interesting thing to think about: this diagram would have much different if organized by high school. According to a 2013 MaxPreps article, 101 former Ohio high school players were in the NFL at some point in 2012.

So what do you think, Browns fans? Would you rather have the current Browns team or one made up of only Ohioans? Let us know in the comments section below!