Alex Gibbs' "One Play": Outside Zone

The Outsize Zone play is Alex Gibbs' "One Play." Kyle Shanahan has also focused his running game around outside zone when he hasn't had a mobile quarterback (i.e. before he had RG3). You may get the gist of what outside zone is, but what are each player's exact responsibilities? Find out below.

Share All sharing options for: Alex Gibbs' "One Play": Outside Zone

Pre-snap, the quarterback needs to be able to count. He has the best view of all 11 defenders, and he needs to know which offensive players can block which defenders. For Gibbs, this often means choosing which direction the play will be run. If the offense doesn't have enough men to block everyone to the side of the call, the quarterback needs to change the direction of the run by making an "Over Over" call, which switches the direction of the run. 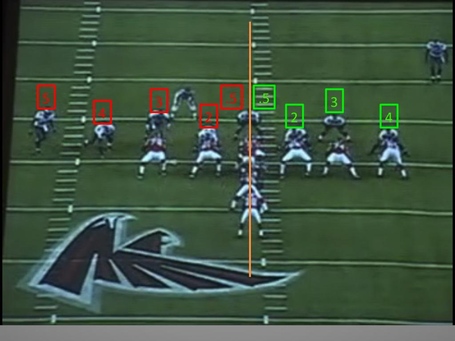 There aren't enough people to block the weak side (left) of the formation, but the offense can block the strong side. The QB has the best vantage point and needs to understand who can block which defenders before the snap. 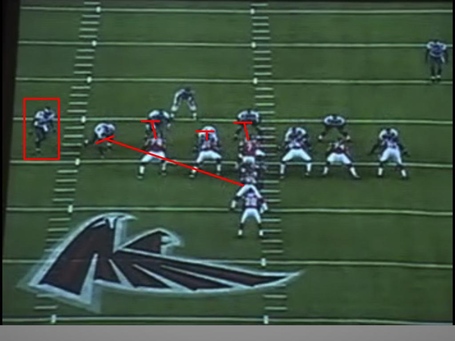 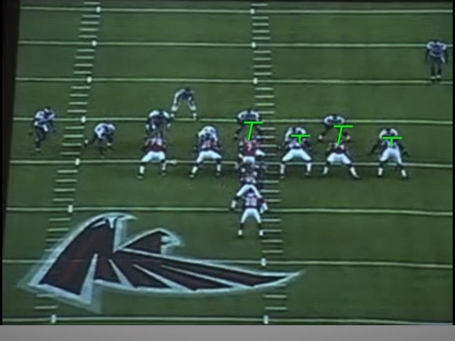 After the snap, the quarterback will open to the side of the play if he is under center, and he will meet the running back at the mesh point. He will hand the ball off, bootleg, and then take three hard steps out to the backside of the play as though he were on a naked bootleg and running with the ball. This "burst" is meant to hold the backside pursuit. 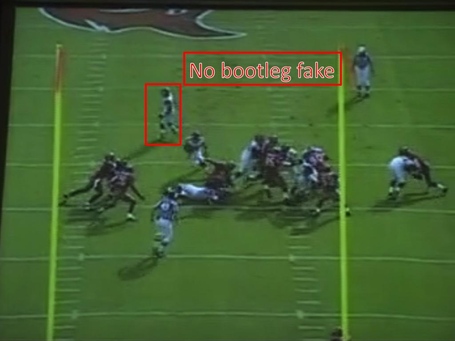 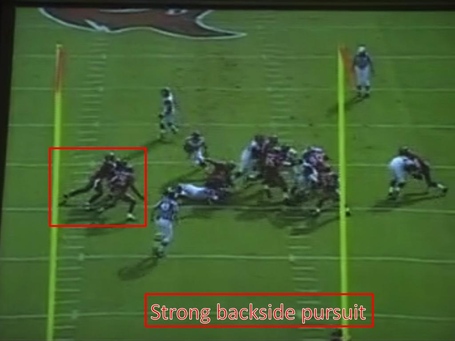 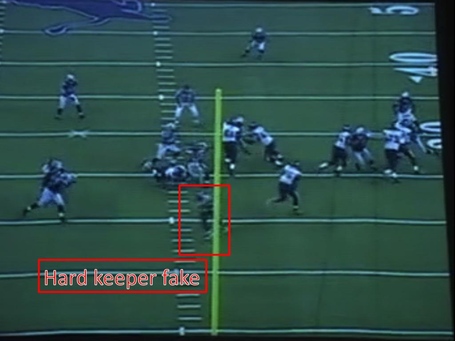 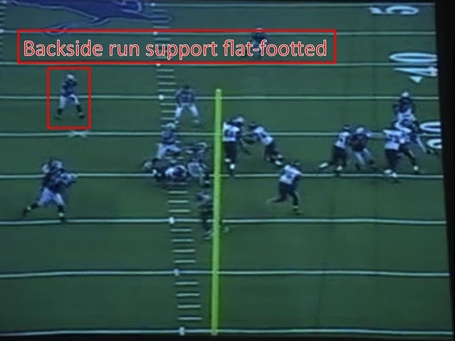 The QB doesn't need to make three guys chase him, but he does need to make one man hesitate. (If you're reading this and wondering about the read option, don't worry, it is coming)

Pre-snap, the running back will read the defense's formation to get an idea of where his cut may be. He can not fully pre-determine this cut. Ideally, he reads both sides of the line so that the defense cannot read the back's eyes and know which direction the play is headed. The direction of the run may also change based on an "over over" call, so he'll need to survey the entire front. 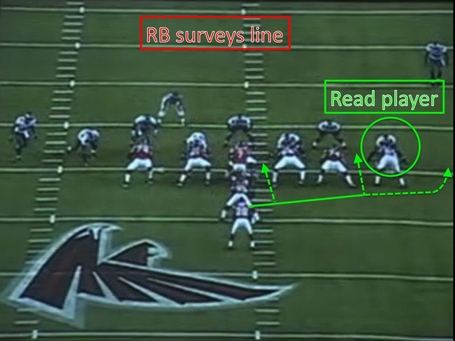 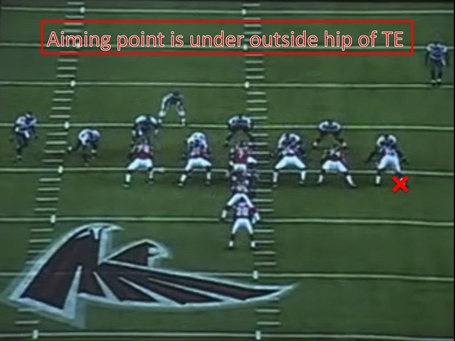 Prior to making his cut, the back will run "with tempo" but not as fast as he possibly can. The coaching point here is "burst through the line, don't burst to the line". On his third step the back will need to go where his read takes him and be decisive in doing so. If his read has been sealed inside of his widest blocker, he will bounce the play outside. This is the ideal path for the offense, with the back in the most space with the most likelihood of breaking a long run.

If the back's read goes outside or if the read is unclear, the back will cut downhill and immediately take his eyes to the second down lineman or any blitzing/attacking linebacker between those two linemen. At this point, the back will "run to daylight" and flow immediately downhill hard once he finds space. The back cannot dance, he cannot double cut, he must run right downhill into any space available. If the back is at all unsure he should cut downhill and get two tough yards. 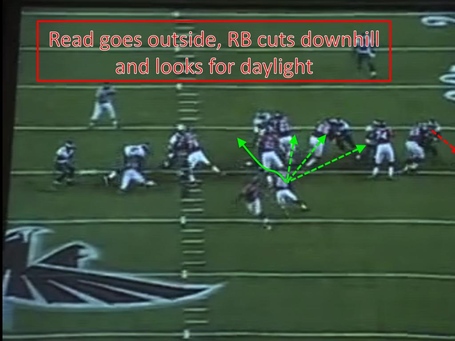 Though this looks like a "cutback" and it will be called a cutback by every announcer that covers the Browns, it is almost never a cutback. In fact, the cut will happen almost exactly at the width of the TE's original alignment (or an imaginary TE's alignment). If the cut happens sooner, it will be because an interior defensive linemen has been pushed out to that very aiming point and the back will be making his cut off of that lineman. 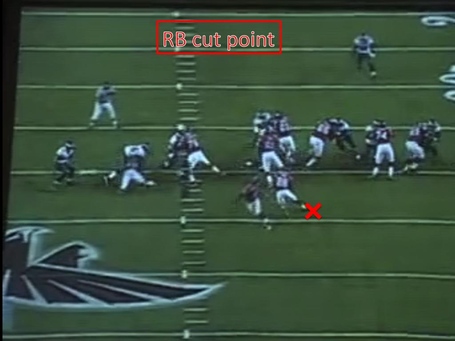 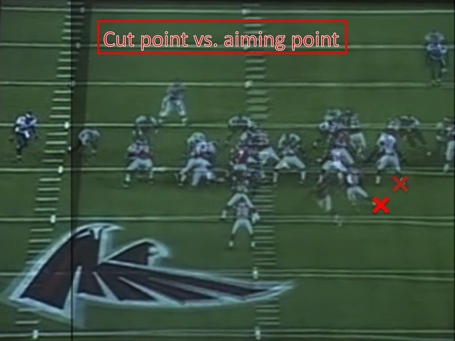 Once the back gets through the line of scrimmage, his job is to get as many yards as possible. Often, this means running with the same no-nonsense downhill mentality that got him to the line in the first place. But other times this will be when the back gets creative.

Famously, Alex Gibbs teaches these reads to the entire team. So when the back makes a bad cut or dances to try to break the big one, his linemen police the back. Often for the first time in his life, the back is being told what to do. However, this isn't always ideal. Gibbs has a great rule of thumb for anyone coaching the backs:

"If they make 5 [yards], everybody shuts up.... First downs? Shut up. It is more important to make first downs than to make the right read...Its 3rd and 2,3,4 and he makes a hard downhill cut and makes a first down? Get the f**k back to the huddle and shut up and let's go." -Alex Gibbs

Gibbs believes in not over-coaching on gameday and letting his players play with confidence. Above all he believes in results. Get 5, everybody shuts up.

This is where the magic happens. The ability for these blockers to work as a unit is really what determines the success or failure of this run play (or any run play). I will discuss the fine points of the system in another post, but the offensive line will essentially look to block through the playside gap next to them. In some situations the linemen on the backside of the play (left side of the line if the run is to the right) will look to cut block.

If linemen are "uncovered" or have no defensive players aligned over them they will look to double team with the lineman playside of him or in some instances leak immediately up to the second level. If they are "covered" by a defensive player, offensive linemen will block the lineman over him either by himself or in conjunction with an uncovered lineman. 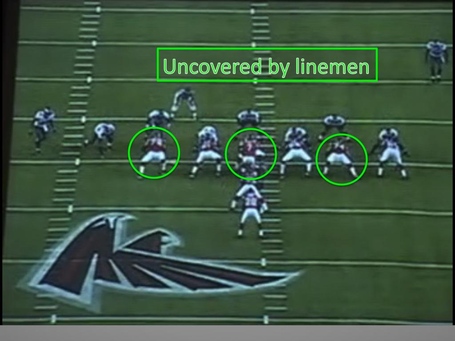 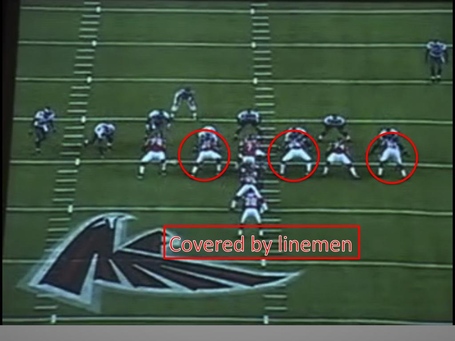 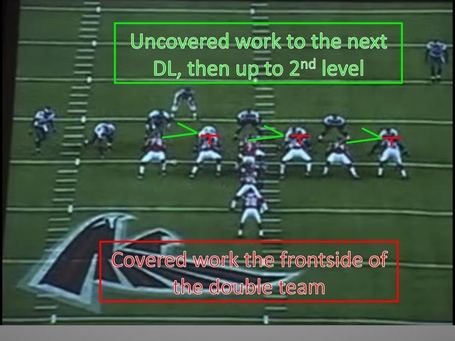 The tight end in the zone blocking scheme blocks like a 6th offensive lineman. He can be moved through shifts and motions (in fact Gibbs loves moving his TE), but eventually he lands next to an offensive tackle either on the line or slightly off of it. He will block with the same techniques as the OL.

The fullback, by contrast, can be inserted in a variety of ways. He can be designated one player to block, or he can be turned into a "searcher" who makes the same reads as the back and hits the first 2nd level player in the way. His blocks and positioning will be significantly different than the OL. Gibbs doesn't need a 260lb bulldozing fire hydrant of a man to play fullback. He needs an athlete, he needs a player who can react, and he needs someone versatile.

We can't afford a blunt player...we don't want a 260 pound f**king slug...we want a receiver, and we want a guy who understands the same reads that RB is making. Maybe he's a better pass protector -Alex Gibbs

Gibbs believes he can get young playmakers the ball as long as he has a veteran who can handle the pass protection. Pass pro is hard to learn for rookies, so a FB who can fill in at RB and protect helps get playmakers on the field in smaller roles. This is potentially good news for Browns rookie Terrance West.

The insertion of a fullback if present and the way in which all of the blockers sift up to the second level is really paramount to the success of the play. Teaching this and practicing it to the point that it is second nature takes a lot of time, which is why a good zone blocked system is based around this one play.

Up next: The offensive line's toolbox