In the second installment of this series, I evaluate the Week 1 pass rush and look ahead to the upcoming game against the New Orleans Saints.

Week 1 of the 2014 season is in the books. I'm not one to dwell on the past, but I do think we can learn some things from it. With that in mind, let's look back at the pass rush versus the Steelers, so that we can figure out what to expect for Week 2's matchup with the New Orleans Saints and going forward.

If you are looking for an explanation of where the following numbers come from or a breakdown of the 2013 results that I use as a basis for comparison in this article, check out my introductory 2014 Browns Pass Rush Season Primer. Now, let's jump into this week's results.

Number of Pass Rushers on Play:

Results of Plays With 5-Man Rush:

As you can see, the overall team pass rush score was down this past week compared to the 2013 season as a whole as well as the Week 17 game against the Steelers. Why is this and what does it mean?

1. Blitzing was down compared to last year on qualifying passing plays: The Browns brought nearly 10% less 5-man rushes, which can to some extent account for the similar 9% decrease in functional pressure on the quarterback.

2. Screen passes: We got burned on two huge screens on the opening drive. 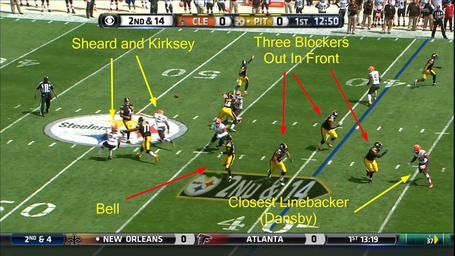 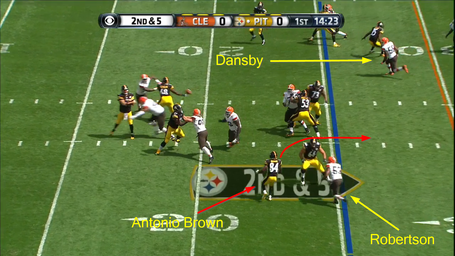 3. Blitzing was down (and out) in the second half and the focus was on coverage and contain: This is really where the numbers became skewed. The coaches decided to abandon the idea of bringing 5-man pressures -- even though Karlos Dansby snagged his interception on one such play -- and I think this is the major reason why the team pass rush score dropped this week. They chose to forgo getting extra pressure in exchange for preventing the type of big plays we got burned on several times in the first half, including the aforementioned screen to Antonio Brown and the following plays: 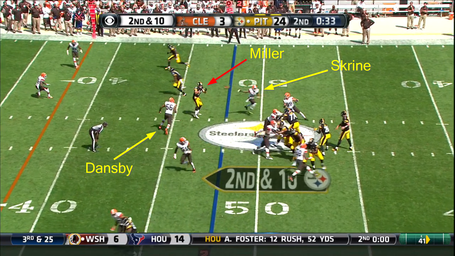 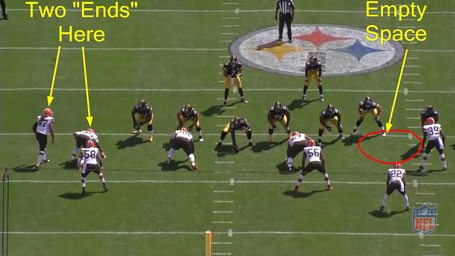 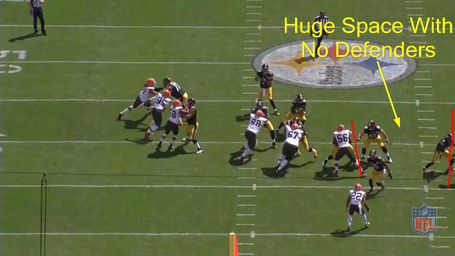 I feel like Mingo got a lot of flak for this play. He deserves some for the underwhelming start to his career, but not for this play in particular. In fact, other pass rushers made much bigger mistakes here. Buster Skrine had a free lane to the quarterback but took a bad angle, whiffed, and ran into Mingo. Roethlisberger got Billy Winn to waste time jumping without even a pump fake. This slowed Winn's rush and prevented him from getting to the QB. If Winn doesn't jump, this is a sack and we're praising Mingo for drawing the double team that freed up Billy Winn. Ahtyba Rubin came free while Kruger was being double-teamed. He saw Winn bringing pressure up the middle and should have moved outside to eliminate Big Ben's escape route. Instead he went inside and lost contain. Finally, Paul Kruger got held from behind on the play. That's not his fault, but he chose to hold up his hand and call for a flag instead of focusing on completing his rush. C'mon, guys! That's Coach Pettine's "comedy of errors" for you. Let's take another look:

4. Sometimes you'll still get burned by a well-run screen play: Playing with discipline should still improve your chances, put the onus on the offense to execute perfectly, and reduce the frequency with which you get burned. 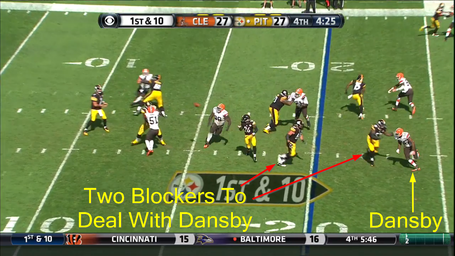 5. Perfect example of why the Browns shifted to a less aggressive approach on defense: The Steelers ran the same screen pass to WR Antonio Brown that gained 41 yards in the first quarter (shown above in the second bullet point under point #2) again near the end of the second quarter. This time they rushed 3 and dropped both inside linebackers and one outside linebacker into coverage. This time the play only gained 6 yards on a 3rd-and-7, forcing a 3-and-out: 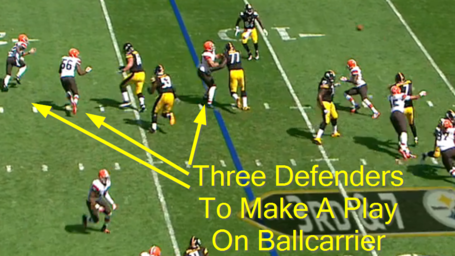 Paul Kruger bullies the right tackle backwards, leaving a running lane for the quarterback. Aware of this, he knifes into that space to bring down the scrambling QB for a sack:

Now facing LT Kelvin Beachum, Kruger draws a double team, gets a flag for being held, and still tackles a scrambling Ben Roethlisberger for a minimal 1-yard gain:

A stunt between ILB Chris Kirksey and DT Armonty Bryant creates pressure up the middle on Ben Roethlisberger:

Here we can see Ishmaa'ily Kitchen getting pressure on Roethlisberger in Week 1 and forcing him to throw the ball away:

3. Of the inside linebackers, I suspected Karlos Dansby to be the one rushing the passer. He didn't in Week 1, but Chris Kirksey did 3 times and Craig Robertson did once.

Robertson did not get pressure on the quarterback in his lone attempt, but Kirksey did two out of the three times he rushed, including one sack.

Can the Browns get pressure on QB Drew Brees with a four man rush? Can the Saints pass protect well enough to force the Browns to blitz?

1. If Brees has time, he can pick apart the Browns pass coverage with his huge arsenal of playmakers; if the Browns blitz, he will find the open man: The Browns can't hope to cover Jimmy Graham, Brandin Cooks, Marques Colston, Kenny Stills, and running backs Mark Ingram and Pierre Thomas if Brees is able to take his time and wait for them to come open. They also can't afford to send 5- or 6-man pass rushes very often, because Brees will target the vacated area and make them pay...like the Steelers did. The 4-man rush must get home.

2. Saints Left Tackle Terron Armstead: Armstead has excellent balance, feet, and technique. He is very good at taking away speed rushers, as he can mirror them around the corner with his rangy kick slide. Unfortunately for him -- but quite fortunately for us -- he struggles against power. He's simply too lean and lanky and lacks a strong base. Due to his strengths and weaknesses, I advise that we keep Mingo far, far away from him. Paul Kruger would be my first choice to go up against Armstead. His combination of tremendous power and functional quickness would give him the edge in this matchup. Sheard should also see some action here.

Look at Armstead using sound technique and getting good leverage...yet still getting thrown aside (also note his skinny legs):

3. Saints Right Tackle Zach Strief: Strief is a large, long-armed tackle with good balance for his size but is a waist-bender and has bad feet. He makes up for this by leaning and reaching -- these things actually serve him well against outside speed rushes, as you can see below. With his long arms, it's hard to get by him around the corner without taking a very wide loop. Instead, set him up with an initial outside move, get him leaning (which he is eager to do to wall off your outside rush), and redirect inside. I don't really like Mingo on Strief either; this game isn't likely to be a big one for him if he makes it off the injury report. Preferably, Kruger lines up against the left tackle and Sheard takes on Zach Strief. He has enough quickness to set him up and then some power to get through him inside.

4. Saints Center Jonathan Goodwin: No offense to the man personally, but Goodwin is one of the worst starting centers in the NFL at dealing with power. Look below at how the nose tackle walks him back to the quarterback and then chucks him aside. I can understand having Rubin out there in the base defense, but part of me really wants to give Ishmaa'ily Kitchen the start at NT as he's much better at driving through his blockers (and had a big play doing so against Pittsburgh, which I showed you above).

5. Saints Right Guard Jahri Evans: This is the guy I want to put Armonty and/or Desmond Bryant on. Evans gets demolished by quickness and agility. He simply has very slow, heavy feet. Look at his slow reaction time in the play below, he hardly moves his feet at all, just leans a little and lets the defensive tackle swing right by him.

Before you say, "Well, maybe he was just caught off guard", let's look at another example. This time, there are no tricks, just a straight up power rush right at him and he still doesn't move his feet:

6. Saints Left Guard Ben Grubbs: Grubbs is rock solid. Balance, base, power: he has it all. I would suggest putting a bigger, 2-gapping defensive end or defensive tackle (depending on the set we're in) like Phil Taylor or Ahtyba Rubin on him to keep him occupied, because there are more favorable matchups everywhere else along the line for our better pass rushing linemen to exploit.

ATTENTION: This is the end of the analysis portion of this article. The remainder consists of tables reporting the grades individual players received for each of their pass rush attempts in Week 1 (as was done with their 2013 grades in the 2014 Browns Pass Rush Season Primer).