NFL Week 2: FiveThirtyEight Elo Ratings - Where do the Browns Stack Up?

Share All sharing options for: NFL Week 2: FiveThirtyEight Elo Ratings - Where do the Browns Stack Up?

If you follow politics at all (caveat: this is not a political article, save the comments), you're probably familiar with Nate Silver's website FiveThirtyEight.com. Silver started it as a polling aggregation website, but ESPN purchased the rights to the site last year, and increasingly, the site has expanded further into the sports realm.

During the World Cup, they began using the Elo rating system to rate the teams participating. The Elo system gets its name from Aprad Elo, and was designed by him to rate the skill level of chess players. It has since been adapted to many different sports, and as I mentioned FiveThirtyEight has used it in the past for the World Cup.

Why is this relevant? Well, the site has now started adapting it to the NFL. Last week they released their Week 1 rankings, found here. They also added the high and low points for all NFL teams, based off of their Elo rating, found here. You can find furhter details on how they get to these ratings here, heads up...it's heavy statistical stuff.

I plan on posting these weekly, and/or adding them to the Power Rankings piece, whatever seems to work out best. For the sake of this week's exercise, let's take a look at the Week 2 Elo ratings to see where the Browns shake out. 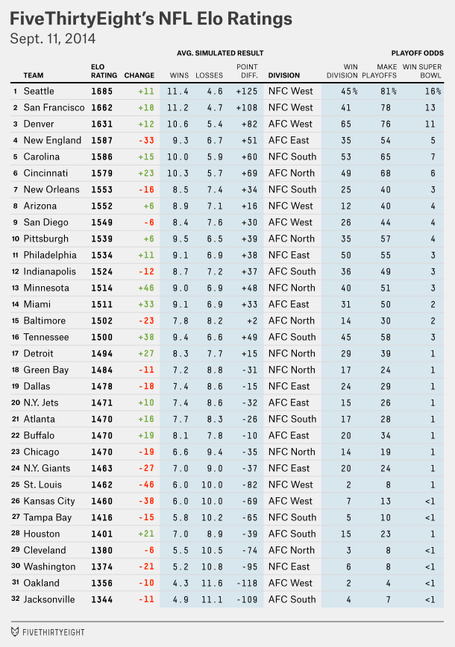 The above chart comes via the FiveThirtyEight's Week 2 post. As we can see from the above chart, the Browns are graded out near the bottom at 29th. That seems to coincide with what we saw from the power rankings round up this week. While some teams near the bottom of this chart separated themselves and got significantly worse, the Browns didn't lose too many points. In fact, they stay right at 29th, with Washington and Houston swapping places on either side of them. An average team would be rated as 1500, so the Browns clearly have some ground to make up to get to the middle of the pack.

The chart also gives us their updated odds to win the division (3%), playoff odds (8%), and Super Bowl chances (HA!). Both of the division and playoff figures are down from last week's odds, 6% for the division, and 12% for the playoffs. 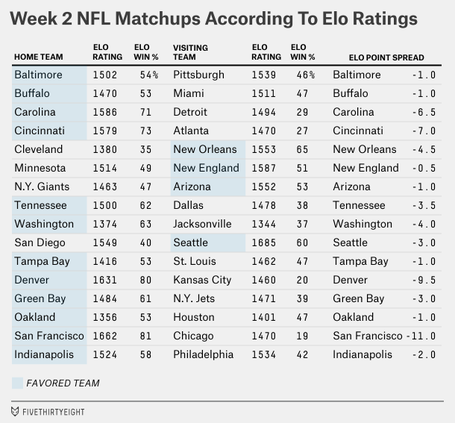 The above chart breaks down the week 2 matchups in the NFL. According to their system, FiveThirtyEight gives the Browns a 35% chance at winning this week. An interesting note, the Browns are the only home team to have less than a 40% chance to win this week. The second-lowest is the Chargers hosting the Seahawks at just a 40% of a Sand Diego win. And that is because it's, well, Seattle.

If we look at Jon's Dawgs By Wager this week, we see that the Vegas bets go right with the Elo ratings, with 65% of the bets going to the Saints.

For perspective, last week Vegas had the Steelers favored by 6.5, and FiveThirtyEight had them by 8.5. As we know, the Browns held it closer than either of those, losing by 3. So it'll be interesting to see as the season projects how Vegas and FiveThirtyEight's projections line up.