DawgsByNature's Mike Krupka breaks down the Browns week 2 offense vs. the New Orleans Saints. There was a lot to like about this game, but a lot to improve. We all know Brian Hoyer led the team back in the 4th quarter for the win, but let's take a look at how Kyle Shanahan utilized his offense and what he possibly looked to exploit.

We did it Browns fans!

We won our home opener for the first time in 10 years (2004) and we did it against a team that many tout a legitimate NFL contender. In the end, Drew Brees and the New Orleans offense (namely a guy named Jimmy Graham, perhaps you've heard of him?) put our defense to the test in the second half. Still, Brian Hoyer was able to keep the chains moving in the 4th quarter; keep our offense on schedule; and make the right throws to help us earn the lead with :03 seconds left and eventually the 26 - 24 comeback win.

Yes, this is really happening. 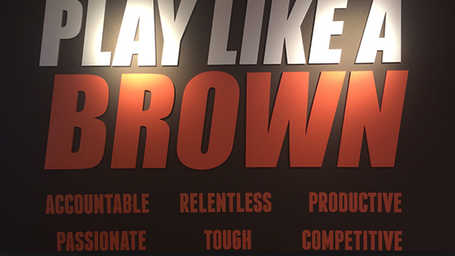 If you heard the post game press conferences of both Mike Pettine and Brian Hoyer, you could sense how special it was to get the first victory of the season. Will Burge did an excellent job summarizing what I also believe to be true in his article today: this team appears to be learning to "Play Like a Brown" and is really taking on the persona of its Head Coach. In Brian Hoyer's press conference today he said:

"This team is built on toughness"

And as special as this win was for the rookie head coach, Mike Pettine said in his Monday press conference:

"This was a team win"

Yes indeed. I believe it. It was a team win. And Mike Pettine's players are buying in and executing his mantras. Perhaps more importantly, they seem to be holding each other accountable to them. This group of players has battled back in both games so far this season, stayed in the game and never given up. Excluding a few bad plays in the first half in Pittsburgh, this team has looked nothing like the "same old Browns". While there is certainly plenty of areas to improve in and how we handle this success will be important, but the team has a good vibe heading into next week's home match-up with our division rival Baltimore Ravens.

Shout out to our fans who added passion to the victory by creating energy and crowd noise which helped pump up the players and cause trouble for the Saints.

Karlos Dansby just told me this was the loudest crowd he's ever played for today; fans so loud he couldn't hear D play calls

On Twitter after the game I mentioned how cool it is to think about how many players (and coaches) made their home playing debut in Cleveland: Bitonio, Kirksey, West, Crowell, Agnew, Gabriel, Dansby, Hawkins, Dray, Manziel, Gilbert, Moore, Whitner, Williams, Austin, and perhaps a few more. I have to believe all these new guys are amped knowing what "the DawgPound" can sound like when they make plays and win. Coach Pettine mentioned how fantastic the atmosphere felt today during his press conference, and players seem eager to earn more wins.

I've been incredibly impressed with what Kyle Shanahan has done with the offense. His game plan and his play calling have been excellent, diverse and adaptive - all are keys I discussed before our week 1 match up. We've come out and proven to teams that we can certainly run the ball - and run the ball well - but we've also proven that, when we need to pass the ball, we can. We may not hit big plays consistently but we can move the chains and our receivers can get open. Coming into the season with the uncertainly surrounding Josh Gordon, this area of the offense was a big question mark. Through 2 games, I think we've seen good play from Hawkins, Gabriel, Austin, Dray and Barnidge, which has helped ease many of those concerns. During that same stretch, the offensive line, TE and rookie running backs have been playing a critical role in our success. Enough can't be said about how well the OL/TE have blocked. Now it's about finding consistency and continuing to adapt, adjust and improve.

Looking thru some status this morning, and what team is the highest rated squad on offense per @PFF? The Cleveland Browns by +8.2

Last week vs. the Steelers (and by my calculations) the Browns ran the ball 78.5% of the time to the right side. This surprised me a little because of the question marks around both Greco and Schwartz following pre-season, but after watching the game several times last week, it was apparent Shanahan saw something in the Pittsburgh defense that he wanted to exploit by running right - and he did.  I summarized what I saw specifically in the running game in two articles from last week - Crowell & West.

This week vs. the Saints, the Browns ran the ball 30 times, averaging 4.06 YPC and 122 total yards. They ran the ball to right just 43% of the time, choosing to go left 57% of the time, and more interesting is that they choose to run up the middle (between the C and the G, or the A Gaps) 50% of the time for 43 yards. These inside runs constituted 35% of their total run yardage while 64% of their runs came between the tackles and combined for 78 yards.

Unlike last week, they ran the ball from under center significantly more vs. the Saints than vs. the Steelers. Last week over 70% of the running plays came from the pistol, where this Sunday vs. the Saints, only 30% of the running plays came in the pistol while 66% came with Hoyer under center. Last week over 90% of the runs came while in 12 Personnel, yet this week only 10% came while in that same personnel. The Browns clearly favored running from both 11 Personnel (43%) and 21 Personnel (43%) vs. the Saints. This says as much about the blocking of the OL as it does about how the strong the fits are for both these rookie running backs in the Shanahan ZBS. 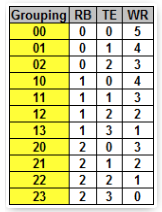 Here's a chart to help you refer to for personnel groupings.

I didn't focus on the passing game last week vs. the Steelers, so I don't have comparative data yet. That being said, yesterday's game vs. the Saints was dominated by the 11 Personnel grouping (69% of all passing plays came in this formation). While some of that was due to the circumstance in the game, Shanahan clearly favored that grouping in the first half as well. In total we threw the ball 42 times, completing only 25 of those passes for 204 yards and 1 TD. Brian Hoyer's completion percentage was 60.9%. The Browns favored a more traditional shotgun look (48% of all passes) vs. throwing from the pistol (17%) and from under center (38%). The team rolled their QB out 4 times (9.5%) and used play action 8 times (19%). The pass was certainly needed at the end of the game, but even more important was that we didn't turn the ball over.

Here is the link to my GoogleDocs spreadsheet. This link truly is "the rug" from the Big Lebowski -- it ties this whole article together. The link includes the details from both charts seen above as well as all the details from both charts below -- including breakdowns of each individual quarter. MOST importantly (and the most fun) the linked spreadsheet includes various embedded links to specific / corresponding Vine Videos that I chose to highlight along the way. Have fun!