In this installment of the series, I evaluate the Browns' Week 2 pass rush versus the New Orleans Saints.

Week 2 of the 2014 season is in the books. I'm not one to dwell on the past, but I do think we can learn some things from it. With that in mind, let's look back at the pass rush versus the Saints, so that we can figure out what to expect from the defense going forward.

If you are looking for an explanation of where the following numbers come from or a breakdown of the 2013 results that I use as a basis for comparison in this article, check out my introductory 2014 Browns Pass Rush Season Primer. If you'd like to take a look at the Week 1 results, look at my Week 2 Forecast. Now, let's jump into this week's results.

Number of Pass Rushers on Play:

As you can see, the overall Team Pass Rush Score this past week was higher than the 2013 season average as well as the mark set in Week 1's game against the Steelers. How did the Browns achieve this?

1. Blitzing was higher versus the Saints than in Pittsburgh on qualifying passing plays: The Browns brought nine 5-man rushes, making up 29.0% of their total pass rushing attempts. They only had three when they faced the Steelers, which made up only 10.7% of their pass rushing attempts. To some degree this accounts for the increase in functional pressure on the quarterback, which they got 67.9% of the time in Week 1 and 80.0% of the time in Week 2.

2. Screen passes: We got burned on two huge screens in Week 1. We didn't give up any big screen plays in Week 2. This was one way that the Steelers made us pay for playing too aggressively early in the game. As a result, we dialed back our pressure. The Saints didn't find such success in the screen game. 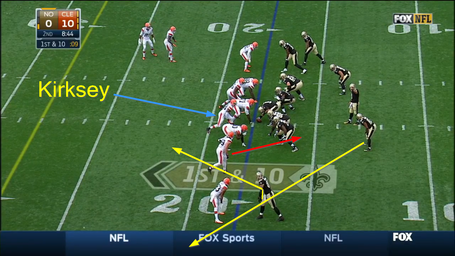 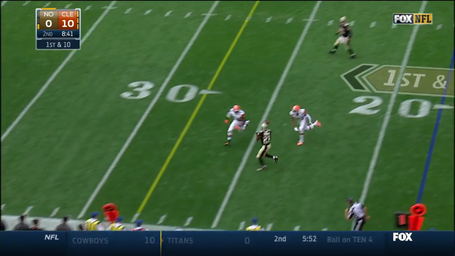 3. The Browns defense did not give up huge plays while blitzing: This is the real difference maker. In Week 1, the Browns gave up three 35+ yard plays while rushing five, two of which were touchdowns. In Week 2, they only gave up a single 20-yard play when sending five on the rush. They still gave up some bad situational plays while blitzing (see the highlight plays list above), but none of these were for big chunks of yardage. As a result, they were able to stick with their game plan and mix up their pressure packages: switching between 4-, 5-, and 3-man rushes (51.6%, 29.0%, and 16.1% of the time, respectively).

4. One of the reasons that the Browns boosted their pass rush statistics was that they prioritized getting pressure at the expense of run defense: The defense gave up 174 yards rushing, to the tune of 6.4 yards per carry on 27 attempts. The Saints actually averaged more yards per rushing attempt than their 5.3 yards per pass, yet they attempted 40 passes: a 40/60 run-pass ratio. So, to some extent, they let the defense off the hook rather than pressing the advantage. 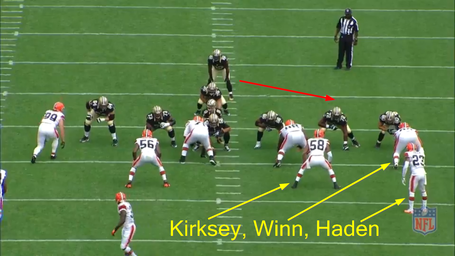 Winn steps inside in an attempt to blow up the play by forcing the running back to make his cut inside and into the teeth of the defense. Kirksey overlaps him and has contain responsibility to the edge. Note that there is a tight end free on the end of the line as well as a fullback releasing from the backfield: 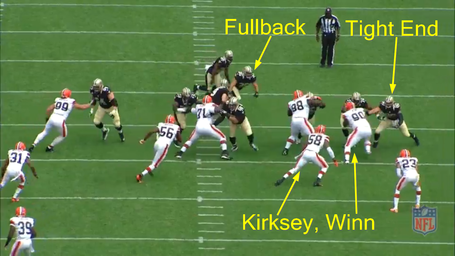 Winn gets some penetration into the backfield, but not enough and not quickly enough to force the runner inside. Kirksey gets hung up on the tight end's block. The fullback has his sights set on Haden: 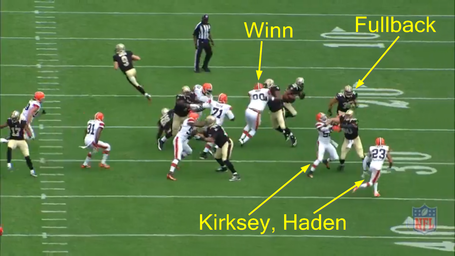 The fullback takes Haden out of the play. Leaving Kirksey as the last guy who can get Ingram on the edge before he's off on a race to the endzone with safety Tashaun Gipson: 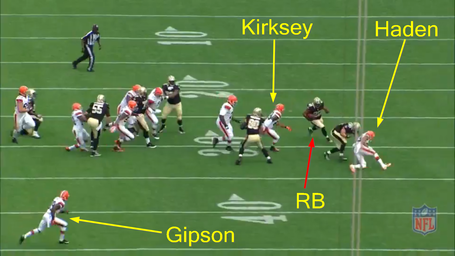 Ingram turns the corner just out of Kirksey's reach and breaks down the sideline. Gipson is the last man between him and the endzone and he eventually forces Ingram out of bounds. 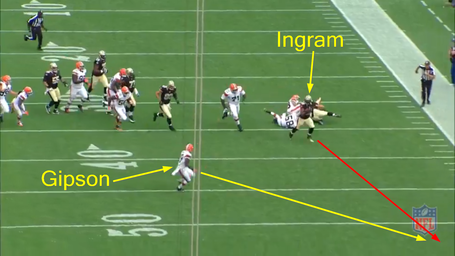 5. The Browns were able to get creative with their pass rush: That's one of the major benefits of holding up in coverage. They even used a zero man pressure package on one play with the two ends playing edge contain on the quarterback rather than rushing (see red in images below). Buster Skine is playing press man coverage on Jimmy Graham. The three defensive tackles (Taylor, Rubin, Desmond Bryant) and Karlos Dansby lined up on the line all drop off into underneath zone coverage to take away Jimmy Graham: 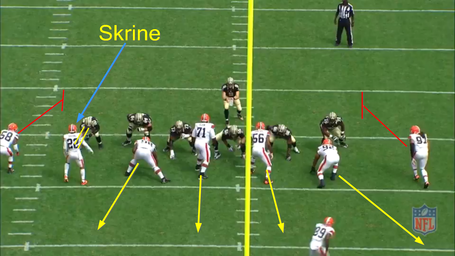 The result? Brees pulls the ball down and scrambles up the middle for a 3-yard gain rather than taking a shot at the end zone. Would you attempt a pass to Jimmy Graham when he's this well-covered? I wouldn't. 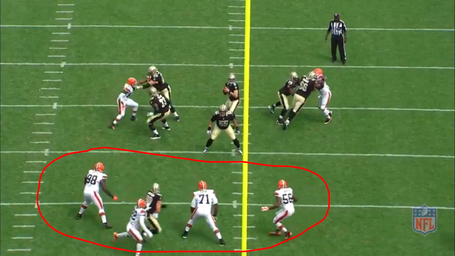 6. The Browns sometimes only had a single defensive tackle on the field: Armonty Bryant was the choice to serve as the sole DT on each of these plays. 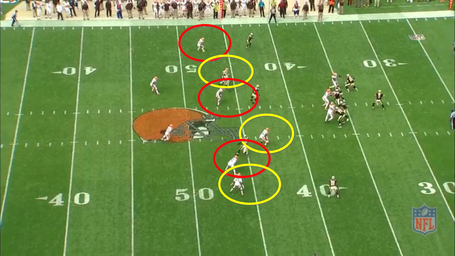 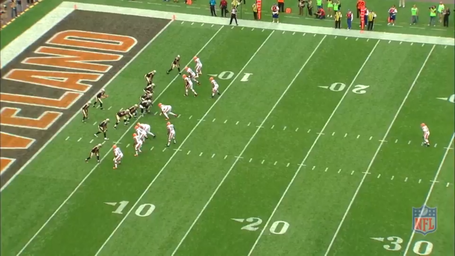 Okay, I'll zoom in and label them by their positions to give you a better look. Much clearer now, right? 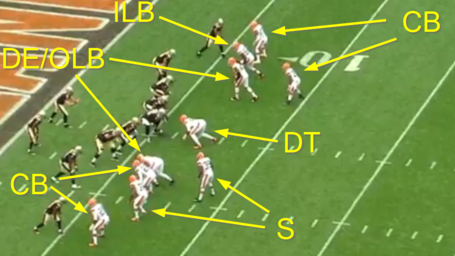 Well, it turns out that as much of a mess as this looks like for an offense trying to identify who to block, Saints left guard Ben Grubbs made an even bigger mess of it by completely whiffing on his block on Jabaal Sheard. The quarterback's pass fell incomplete well short of his target because he was unable to step into his throw due to Sheard bearing down on him: 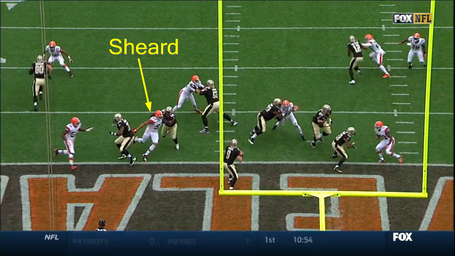 Here are the coverages (yellow) and the rushers (red). Armonty Bryant, Jabaal Shead, Paul Kruger, Karlos Dansby, and Donte Whitner rushed the passer. Tashaun Gipson and K'waun Williams had underneath zone coverage, where Gipson ended up with no one to cover and Williams had Jimmy Graham enter his zone. Cornerbacks Joe Haden and Justin Gilbert had man-to-man coverage on the outside receivers and Buster Skrine was in the slot to the bottom of the screen. As it turns out, the guys you'd generally expect to rush rushed and the guys you'd expect to cover played coverage. TE Jimmy Graham and WR Marques Colston even got open on the play, but the pressure by Jabaal Sheard blew up the play. 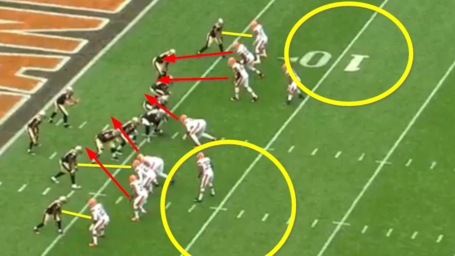 Part 2 is now available, where I discuss how the individual players performed against New Orleans.