In this installment of the series, I evaluate individual Browns players' Week 2 pass rush success versus the New Orleans Saints.

In part one of this week's Browns Pass Rush analysis, I discussed the Browns Week 2 team pass rush performance in the game versus the New Orleans Saints. Here in part two, I will take a look at how individual players fared in their attempts to rush Saints quarterback Drew Brees.

If you are looking for an explanation of where the following numbers come from or a breakdown of the 2013 results that I use as a basis for comparison in this article, check out my introductory 2014 Browns Pass Rush Season Primer. If you'd like to take a look at the Week 1 results, look at my Week 2 Forecast. Now, let's jump into this week's results.

1. Nearly every pass rusher approached, met, or exceeded their 2013 averages.

As I discussed in my comments on the team as a whole, the pass rush took an enormous hit when they only had a single defensive tackle on the field and Armonty Bryant was the choice in each of these situations. His personal Pass Rush Score took a major dip when he was the only DT: he got pressure on the QB only 14.3% of the time when he was the sole defensive tackle. The team's success at getting pressure when he was rushing (his Composite Pass Rush Score) decreased when he was the sole defensive tackle but did not take a major plunge: 57.1% as sole DT and 66.7% otherwise. Therefore, he appeared to be a liability as a pass rusher regardless of the situation...and the Browns are giving up even more in the running game in order to get him on the field to contribute on the pass rush.

Maybe they need to rethink his place in the pecking order or the ways in which they use him -- the other guys in his role, Billy Winn and Desmond Bryant, greatly outperformed him in this game, though Desmond didn't play Week 1 and Armonty had more success than Winn in that game -- or maybe this was just a bad matchup for him. In the preview to this game, I pointed out how Jonathan Goodwin struggled versus the power Paul Soliai brought to the table Week 1. Armonty Bryant does not bring anything like that and Goodwin fared much better against him than he did against the Falcons.

All that being said though, as I explained in point #6 in my team notes, the single defensive tackle package saw some success, mostly due to the additional opportunities it offered to get creative with coverages, and Armonty was the top choice for that assignment. I'm not sure how strongly they prefer him in that role over any of the other guys, but it's clear that they did in Week 2 and that it was a productive lineup, so I expect to see it again when we face other pass-heavy offenses (i.e. probably not this coming week vs. the Ravens but maybe against somebody like the Falcons).

The Saints bring a play action fake with a pulling left guard. Armonty Bryant (yellow arrow) knifes into the A-gap between the right guard and center and into the backfield before Brees has come set and gotten a chance to get his eyes upfield. The quarterback scrambles to avoid Armonty. Meanwhile, OLB Paul Kruger was left unblocked off right tackle, with the pulling left guard coming over to pick him up. Kruger fakes inside to get the guard off balance and then steps into Brees' path. The quarterback is lucky to throw the ball away in the direction of his running back.

Billy Winn comes from his defensive end spot and stunts with outside linebacker Paul Kruger. Winn attacks the right tackle, drives him back, and bulls him into the pocket. As Winn approaches the quarterback and is about to shed his blocker, RT Zach Strief holds him but is not flagged for the foul. Winn has arguably the best outside pass rush move of our defensive tackle group, as he combines quickness, agility, and power to cut the corner sharply.

Here's Phil Taylor getting low and showing pretty good leverage compared to what's usual for him. Look at the power! Even after the guard settles and regains his leverage, Taylor still drives him back another two yards. Hopefully DL Coach Anthony Weaver can find a way to get this out of Big Phil more often:

On this play, Taylor and Desmond both pressure the pocket from their 3-4 defensive end spots. Taylor (yellow arrow) takes an inside move and pushes past the inside shoulder of the right guard and into the face of the quarterback. Desmond (blue arrow) comes on a game taking an inside path, crossing behind Taylor, and coming free and into the backfield at the vacated right guard spot where Taylor came from:

With two defensive tackles, two inside linebackers, and two outside linebackers lined up on the line of scrimmage, the Saints cannot afford to double team either Sheard or Kruger with their 5-man protection. The OLB's respond by rapidly defeating their blockers and threatening the quarterback, but both OT's do just enough to give Brees a chance to extend the play with his legs:

Jabaal Sheard uses a combination of quickness and power to pressure Drew Brees and attempt to bat down the pass:

Sheard comes on a stunt with defensive tackle...Karlos Dansby? Yes, Dansby is lined up as a defensive tackle on this play (with Armonty Bryant as the other DT) and the line runs two stunts, each between a DT and OLB: 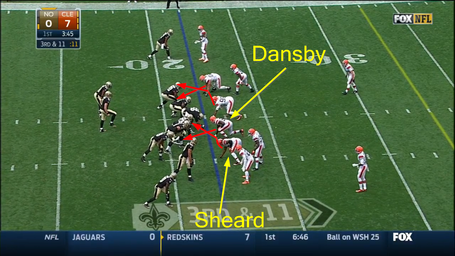 Jabaal Sheard comes inside from his OLB spot and crashes into the right guard and tackle. The impact causes RG Jahri Evans to lose his balance and he staggers forward to catch it. This, plus RT Zach Strief peeling off to pick up stunting DT/ILB Karlos Dansby allows Sheard to get through the B-gap between the guard and tackle and he bats the quarterback's pass down right in his face: 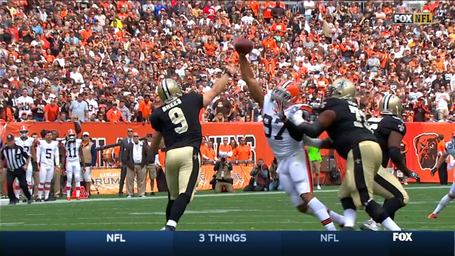 Paul Kruger beats left tackle Terron Armstead to the inside with power (Kruger is lined up at the bottom of the image below, at the end of the line). He takes an outside step to force the LT to respect an outside move, initiates contact by giving him a shove, then arms over to slip inside. Kruger bears down on QB Drew Brees and hits the quarterback as he releases the ball, causing the pass to sail higher than TE Jimmy Graham was expecting. He barely misses it on a leaping attempt with outstretched hands. Instead, Tashaun Gipson snags it and returns it for a Browns touchdown. 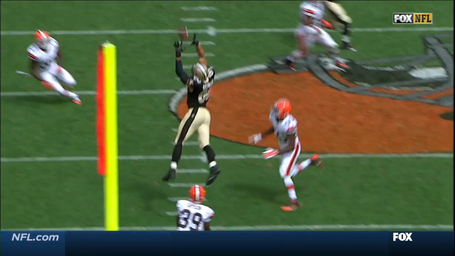 This play starts with a play action fake. For the first second after the snap, Paul Kruger looks to set the edge versus two tight ends: 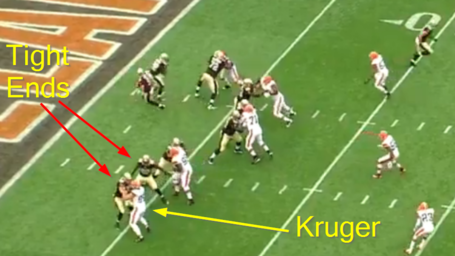 During that initial second, Kruger identifies the play action fake and begins to redirect inside. He runs right by the inside shoulder of tight end Ben Watson, who was caught leaning to the outside. Paul Kruger then accelerates toward the quarterback and secures the sack at the one yard line. Despite delaying his rush for 1 second, Kruger is on quarterback Drew Brees 3 seconds into the play:

4. Karlos Dansby led the way among the linebackers and defensive backs with the most opportunities to rush the passer.

There was one major exception of course: Karlos Dansby's sack. The defense had two defensive tackles and two outside linebackers on the line, two inside linebackers close to the line, and two defensive backs (a safety and a corner) near the line in the slot. Having so many defenders near the line like this can complicate and confuse blocking assignments. Here's how I think the offensive players were supposed to block: 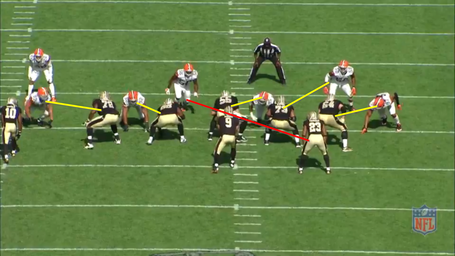 I show the running back's likely assignment in red because he didn't pick his man up. Instead, he went out into the flat and Karlos Dansby was able to come up the middle untouched for a sack: 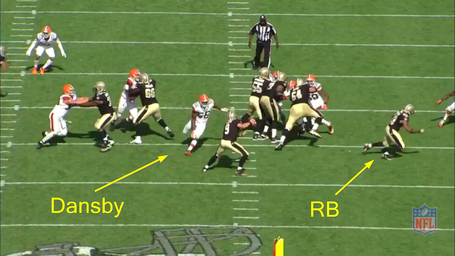 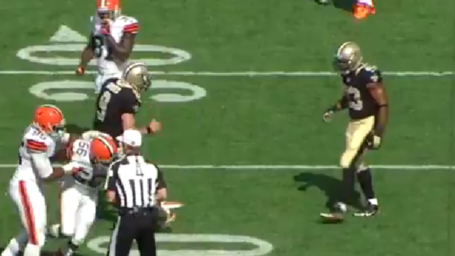 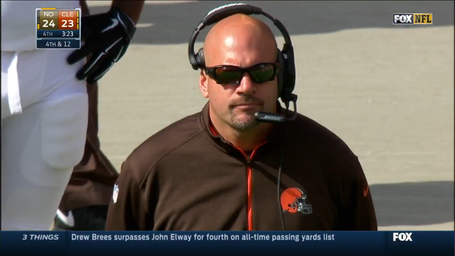 ATTENTION: This is the end of the analysis portion of this article. The remainder consists of tables reporting the grades individual players received for each of their pass rush attempts in Week 2 (as was done with their 2013 grades in the 2014 Browns Pass Rush Season Primer and my Week 2 Forecast).