In this installment of the series, I look ahead to the upcoming game against the Baltimore Ravens.

In part one of this week's Browns Pass Rush analysis, I discussed the Browns Week 2 team pass rush performance in the game versus the New Orleans Saints. In part two, I took a look at how individual players fared in their attempts to rush Saints quarterback Drew Brees. Here in part three, I look at how the Browns pass rushers match up against the Ravens' pass protection, so that we can figure out what to expect in our Week 3 game against them.

What kind of pressure can the Browns get on Ravens QB Joe Flacco? Will the Browns defense be able to put the Ravens offense into a lot of obvious passing situations or will they have to account for a balanced attack?

1. The Browns defense has been struggling against the run so far this season: Through two games, the Browns have given up an average of 150.5 rushing yards per game on 5.4 yards per carry while the Ravens offense has averaged 125.5 rushing yards per game on 4.5 yards per carry. Mike Pettine has stated that it's in his coaching philosophy to give up a little bit in the running game if it helps to stop the opponent's passing offense, but I still expect that he's looking for an improvement in the run defense.

2. Similar to the Browns offense, the Ravens also run a version of the zone blocking scheme, complete with play action fakes off of outside zone looks: Stopping the run is important, but we also have to protect against play action. A big part of that is holding up in coverage, but getting pressure on play action passes disguised as outside zone runs could also help a great deal. Billy Winn was able to do just that versus the Saints:

3. So far, the Ravens have faced the Bengals and the Steelers. Interestingly, those teams both have very uniform groups of edge rushers: What do I mean? I mean that both teams have groups of edge rushers that all fit the same general profile as each other. Wallace Gilberry, Carlos Dunlap, Margus Hunt, and Robert Geathers are all pure power rushers that weigh between 275 and 290 pounds. Dunlap and Gilberry have notable quickness, and Dunlap and Hunt ran blazing pre-draft 40 times, but none among this group would be classified as speed rushers. Jason Worilds and Jarvis Jones are both shorter rushers who are not pure "dip, bend, flatten, close" guys but mix quickness, power, and physicality to challenge blockers. The Steelers have been relying on this duo very heavily and their backups haven't really gotten into the mix yet.

4. Ravens Left Tackle Eugene Monroe: Similar to Terron Armstead that the Browns faced last week, Monroe has good balance and feet. He's good at taking away speed rushers, with the footwork and range in his kick slide to mirror them around the corner. One of his weaknesses, though, is that he doesn't always play with good technique, getting caught lunging at his target rather than either moving his feet or waiting for the target to come to him. This compounds with his other weakness: he struggles against power, especially power combined with quickness. This is another good matchup for Paul Kruger and Jabaal Sheard and at least a decent one for Mingo, assuming he's healthy. Look at Steelers OLB Jarvis Jones catching Monroe leaning too far forward:

Jones got the upper hand on this play but could have done much better. He already had it won in the third frame with Monroe off balance: 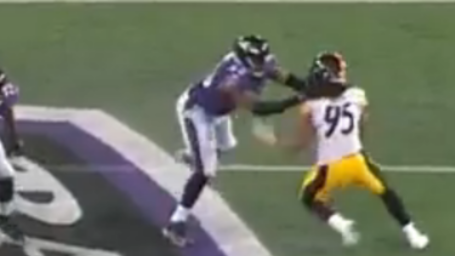 Monroe blocks the only thing he can get at this point: Jones's helmet. Instead of just lowering his pads and charging through the opening to the inside of Monroe, Jones retaliates with a swing to Monroe's face (see below). That may have cost him a flag on the left tackle. Even worse, he's turning his own body away from the open lane, wasting time and momentum and effectively slowing his own progress. 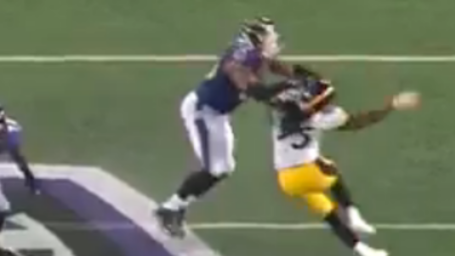 Anyways, setting up an offensive tackle like this and then taking advantage of his deficiencies in technique and/or strength is something that Paul Kruger has consistently demonstrated (Kruger's struggles come when the tackle doesn't show such holes in his game). Jabaal Sheard has also shown this with some regularity.

5. Ravens Right Tackle Rick Wagner: I described how left tackle Eugene Monroe presents a favorable matchup to the Browns outside linebackers. Right tackle was a much weaker link on the Ravens offensive line last season, with Michael Oher disappointing to the point that he wasn't brought back and is now playing for the Titans. Rick Wagner is his replacement:

Okay, he's getting manhandled in the above image. His balance looks good, he's keeping his feet under him and not leaning or lunging. Plus, that was Margus Hunt that he was up against. That might not be a normal matchup. What about Robert Geathers? He's not the intimidating 6'8" 290 pounds that Hunt is:

Geathers is also getting a tremendous push against Rick Wagner. Let's look at Jason Worilds. In terms of stature and strength, he's very similar to Jabaal Sheard. He just happens to be quicker and changes directions much, much better. Still, in this case Worilds will serve as a sound benchmark: 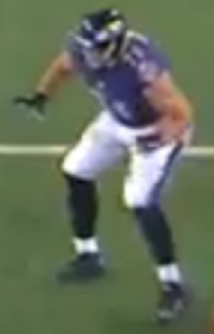 I see skinny legs. Also, as John Madden might say: "No cankles." The film shows that the guy doesn't have much "anchor" to hold up against strength; his body type shows why. As I pointed out last week in my look at Saints LT Terron Armstead, this is the kind of athlete that Paul Kruger fares very well against. From watching Worilds' bull rush, it looks like Jabaal Sheard should also find success here. As for Mingo's potential return to action, I'd rather not have him spend too many reps facing Wagner, because it's a more unclear matchup. KeKe might not have enough strength to threaten him with power and Wagner is pretty technically sound. I'd prefer to have Mingo put his quickness to use against Eugene Monroe, in attempts to get him to lunge and lose his balance.

6. Ravens Center Jeremy Zuttah: Zuttah is a weak link on an otherwise strong interior. He struggles against power and also against quick changes in direction. Cameron Heyward is able to drive him deep into the pocket on a bull rush:

Steelers nose tackle Steve McLendon gains the advantage on Zuttah with strength and leverage...and then beats him with speed to close his loop to the quarterback:

And here he is getting similarly burned by Bengals backup nose tackle Brandon Thompson:

Zuttah displays difficulty matching up with more powerful defensive tackles. That's one thing, the bigger problem is that he's also failing to move his feet enough. It's amazing how he can be both playing on roller skates and have his feet sunk into place as firmly as tree trunks. Okay, that's an exaggeration, but Zuttah does need to get better at keeping his feet alive when he starts giving up ground.

7. Ravens Left Guard Kelechi Osemele: Osemele is a solid pass protector that hasn't shown many weaknesses on this year's tape. Aside from few weaknesses, he also demonstrates good awareness of how his left tackle is doing and is quick to assist him when needed. Osemele is a very good guard but he does have one chink in his armor: mediocre agility in space. Keep him in a phone booth with a lineman on either side of him and he can block anybody. Get him on the edge and you can set him up with a feint in one direction and then redirect back the other way past him. One place where this opportunity can come up regularly against the Ravens offense is on play action fakes off of outside zone looks:

8. Ravens Right Guard Marshal Yanda: Osemele is a talented guard, but Marshal Yanda is even better. One of the very best guards in the NFL, Yanda is reliable across the board and has a few elite traits. What's really elite about him is his range and recovery ability in pass protection. He demonstrates this really well in the example below. Defensive end Wallace Gilberry is lined up at defensive tackle, off Yanda's outside shoulder. He makes a quick inside move, catching Yanda off balance. Yanda pursues, pushes him as wide as he can and into the back of the center, catches up to him, and continues to steer him around the pocket. Yanda was beaten right off the snap and yet all Gilberry got out of it was a guided tour around the edges of the pocket. Impressive stuff.

I haven't seen it yet on this year's film, but Marshal Yanda has had problems with top bull rushers. J.J. Watt had his number on a few occasions in their 2013 game, driving Yanda deep into the pocket:

The Browns don't have a J.J. Watt on the roster, but if Phil Taylor can summon the bull rush that he flashed this past game then maybe he could threaten Yanda: