In preparation for the 2014 season, I evaluate the effectiveness of the pass rush of the 2013 Browns team as well as the individual pass rushers returning for 2014.

Week 1 of the 2014 NFL season has finally arrived! 2013 may be ancient history, but game film from last season can still tell us many things about what to expect from teams and players this year. With that in mind, I studied the tape of the following 2013 Browns games: week 1 vs. the Miami Dolphins, week 4 vs. the Cincinnati Bengals, week 9 vs. the Baltimore Ravens, week 13 vs. the Jacksonville Jaguars, and week 17 vs. the Pittsburgh Steelers. In this study, I graded the pass rush of each Browns player that rushed the passer on every play in each of these five games (with the exception of non-qualifying plays, which I will explain in the "Methodology" section below).

I then compiled the statistics of how frequently each player received a particular grade and assigned each player a Pass Rush Score. This is a percentage rating showing how often the pass rusher received a positive grade: how often he pressured the pocket. (Note: by "pressures" I am not referring to the football statistic with that name, I am talking about how often the pass rusher received an "Impact" or "Effective" grade, as I describe below in "The Grades" section.)

Why do this? Some players see a lot of double teams. Some open up lanes for other rushers. Some face off against opposing teams' best pass protectors while their teammates get easier matchups. For these reasons, I assigned each player a Composite Pass Rush Score to account for how his pass rush opens up opportunities for his teammates.

(I discuss the methods I used first. If you just want the results of the study, skip down to "The 2013 Scores" section about 2/3 of the way to the end of the article.)

Purpose - This study is not focused on the outcome of the play but of the quality of the pass rush.

Non-Qualifying Plays - In general, all plays in which a player rushes the passer in a graded game are considered. In particular, there are several exceptions including:

QB's clock - Comes from the idea that a quarterback should have a clock in his head that tells him he's holding onto the ball too long and needs to get rid of it. (The general consensus is that a QB's clock is just over 3 seconds and after that point the ball should either be out or the quarterback should expect the rush.) In this study, I use "QB's clock" as a term for the time the quarterback has in a comfortable pocket to make a decision/play. I grade the pass rush based on whether it influences the integrity of the pocket (and thus, the QB's clock) and in how timely of a fashion it does so.

Phil Taylor is the most extreme example of this. Desmond Bryant nearly tripled his productivity on an individual level yet the team's numbers with them on the field are nearly identical. How is that? At first thought, I considered that Taylor may have received more double teams. It turns out that this was not the case:  Taylor was double-teamed on 43% of the plays I graded while Desmond Bryant was 44% of the time. Watching the tape, however, showed me that Taylor's biggest impact was in his ability to move his blockers laterally, often stringing them out wide and opening up gaps for others: 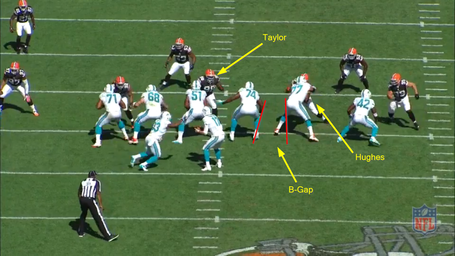 Here Phil Taylor is coming off the snap from his nose tackle position and the center and right guard are looking to double team him while 3-4 defensive end John Hughes is being single-blocked by the right tackle. Note the size of the B-Gap.
. 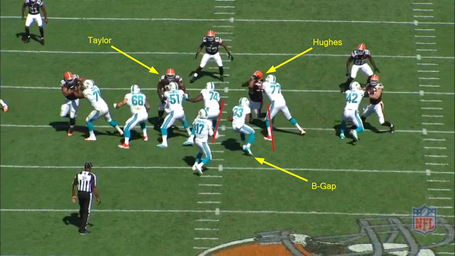 Taylor shuffles laterally, with the center and right guard following him to the left. Meanwhile Hughes has gained the leverage advantage on the right tackle and is slipping past him and into the B-Gap. Look at how wide the B-Gap has become. (Also notice that the left guard is now looking to triple-team Taylor.)
. 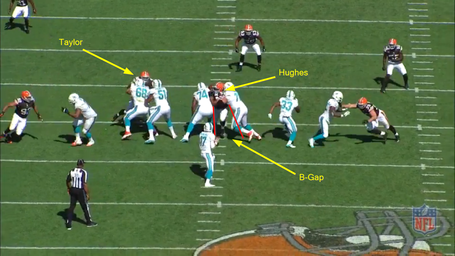 The right guard realizes his mistake, but it's too late to prevent Hughes from getting through the B-Gap and applying pressure on Tannehill. Look at how wide to the left Taylor has ended up on this play.
.
So why assign so much of the attention of your pass protection to Phil Taylor if he has such a low individual rush score? Because if you don't double team him you run the risk of:

(Note: To see larger versions of the GIF animations, click on them and one will open in a new tab.)
.

2. John Hughes and Ishmaa'ily Kitchen should be relegated to the base defense and run downs, if possible.

With Composite Pass Rush Scores more than ten percentage points lower than Desmond Bryant and Phil Taylor --not to mention a whopping twenty-five points lower than Armonty Bryant -- these guys do not belong on the field in obvious passing situations. Similarly, we should be careful how and when we use them versus teams that like to run a no-huddle offense, or else our secondary might get exposed while a poor pass rushing lineup is stuck on the field.

3. Find ways to keep Armonty Bryant in the lineup.

That's what the numbers say. When Armonty is pass rushing, 91.5% of the time the team gets considerable pressure on the quarterback. A third of that time he's the one doing it. The rest? The space and chaos he creates along the offensive line helps his teammates. He drew double teams on 40% of his pass rush attempts, which is not far behind Taylor and Desmond Bryant. He's quite undersized to play his 3-4 defensive end and 4-3 under tackle positions, but he uses good leverage, quickness, flexibility, and balance, along with a relentless motor, to give his blockers fits.

Paul Kruger had by far the best individual Pass Rush Score on the team last year at 48.6%, edging out second place Jabaal Sheard by sixteen percentage points. This may make it sound like he was a consistent producer coming off the edge, but that's not really the case. Kruger's production was highly influenced by the caliber of offensive tackles that he faced. For example, versus the mediocre Michael Oher and the Baltimore Ravens he posted a 63.3% Pass Rush Score and a 76.9% Pass Rush Score versus Jaguars Austin Pasztor while against Andre Smith of the Bengals he registered only a 25% Pass Rush Score.

Why the huge disparity? Last year, Paul Kruger primarily saw action as a left outside linebacker who faced a lot of single-team blocks by right tackles. He dominated matchups against unathletic waist benders and players lacking strength or toughness (Oher and Pasztor). In turn, he was stifled by stout tackles with good flexibility (Smith). Hmm, maybe there is consistency here. Kruger dominates favorable matchups and struggles in unfavorable ones.

As you can see in the above graphic, Kruger is a power rusher. He has a speed move (below) and he has a bull rush (above) but both rely heavily on him using his power to gain a leverage advantage. I'm of the opinion that the ideal position to play OLB Paul Kruger is right next to 3-4 DE Armonty Bryant. Kruger's strength can help protect Armonty in the run game. It can also open up opportunities in the pass rush: Kruger can take an inside move and attack the gap between the left tackle and left guard, using his power to collapse the edge, while Bryant uses his quickness and flexibility to loop around the corner on a stunt.

Here's Kruger on his speed rush. He quickly pushes Oher off balance and then turns into the backfield. Also take notice of Armonty Bryant's relentlessness on the play. He doesn't give up when his initial move fails, he actually completes three different moves on the play -- inside move, spin back outside, and then redirect back inside: 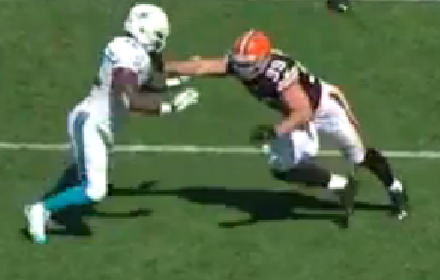 5. Mingo had a rough rookie year...but don't count him out just yet.

Barkevious Mingo entered the league as an under-muscled, underweight speed rusher. Everybody wants those guys to dip, bend, flatten, and close...but that's not Mingo's game. He's a relatively stiff guy for the position that doesn't bend all that well and doesn't get very low. He can't contort his body like one of last year's NFL-sack-leading "Roberts" (Quinn or Mathis), so asking him to is not playing to his strengths. Keke is quick, fast, has long arms, and is reasonably tall at 6'4". If he had the necessary strength and mass, his frame would be well-suited for bull rushing. He does not. So what can he do? 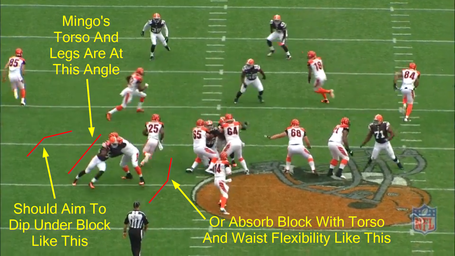 Of the two recommendations on the above image, Mingo hasn't demonstrated the flexibility to dip low enough around the edge to get the best of most offensive tackles. He may be able to find success with the other: point your inside hip at the blocker, fight him off with your hands, and let your waist go loose so that the force of his block to your upper body doesn't transfer to your legs. In the image above, he's making the mistake of keeping his upper body rigid (which would be the right thing to do if he were a big bull rusher or if he was dipped low enough that blows glance off, but neither of those are the case). This makes his entire body function as a single unit: any push to his chest also affects his legs, his feet, and his path to the quarterback. If he relaxes his waist it will act as a fulcrum point where a lot of the force of a push to his upper body will just increase the angle of the bend between it and his legs and not affect his path around the corner (similar to how pushing the head of a bobblehead doesn't affect its body). In the picture above, his feet have Bengals left tackle Andrew Whitworth beaten, but his rigid upper body is holding them back and preventing him from getting pressure on the quarterback.