The Official DBN Fantasy Football League held their draft this past Monday, so now it's time for you guys to vote on who had the best draft. When evaluating these rosters, please note that our league starts 1 QB, 2 RB, 2 WR, 1 TE, 1 RB/WR/TE, 1 K, and 1 DEF. The scoring is the same as the standard Yahoo leagues. The teams are listed below based on their first-round draft order: 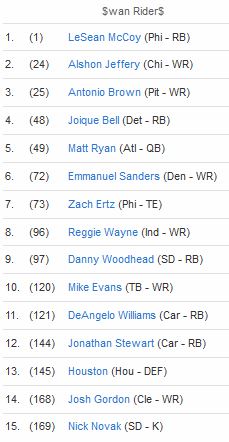 Pokorny's Take: I think it's tough having the first pick in the draft considering how long you have to wait for the second pick, but notthatnoise made the best of it with a high-profile running back in LeSean McCoy and a receiver who had a monstrous season last year in Alshon Jeffery. Emmanuel Sanders was also a winning pick in the 6th round, but other that that, this draft is full of players who won't have enough of a fantasy impact. I can't believe Joique Bell was a fourth round pick. 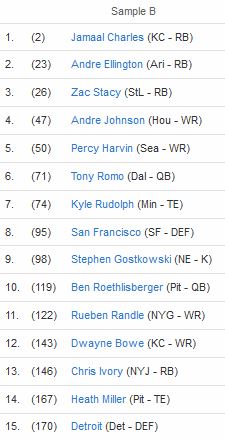 Pokorny's Take: This was an interesting draft strategy...except that Krupka decided to chill in Hawaii and let Yahoo auto-draft for him, so there really wasn't much of a strategy. As a punishment, he got stuck with Ben Roethlisberger and Tony Romo as his fantasy quarterbacks. I wouldn't touch Andre Ellington in round two, but Percy Harvin is a great pick for the fifth round if he can stay healthy. The tight ends are too medicore, and I see too much reliance on Jamaal Charles with this team. 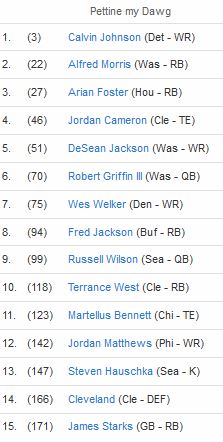 Pokorny's Take: North Coast Flea joined the DBN fantasy league just an hour before the draft kicked off, and he had one of the better drafts. Arian Foster could very well have a big-time bounce-back year in 2013, meaning he's got great value for a third-round pick. Alfred Morris is a work horse back, Calvin Johnson is the best receiver in the league, and Jordan Cameron should be heavily targeted in Cleveland. Robert Griffin III is a risk at quarterback, but it could pay off for being a sixth-round pick. 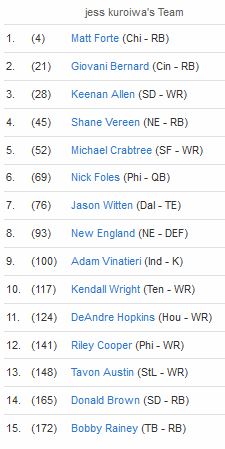 Pokorny's Take: rufio realized how terrible of a fantasy player he's been over the past few years, so he gave up before the draft even started. Look -- he didn't even give his team a name. He didn't attend the draft, so the auto-draft punished him unlike anything I've ever seen. Doesn't the wide receiver group of Keenan Allen, Michael Crabtree, Kendall Wright, DeAndre Hopkins, Riley Cooper, and Tavon Austin just scream, "championship?" This roster looks like mooncamping's from a year ago. 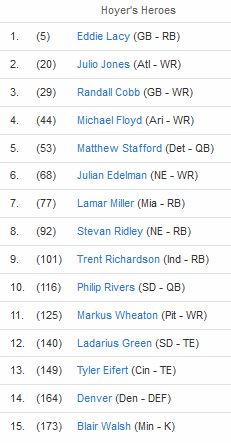 Pokorny's Take: Someone was going to take a shot on Trent Richardson, and I was about to pull the trigger if he had lasted until the tenth round. Instead, Ginley gets him, but he might end up having to start him if Eddie Lacy is out for long with a concussion. Julio Jones and Randall Cobb make for a nice wide receiver combo and I like Matthew Stafford at quarterback this year. Philip Rivers is a good backup for matchup situations. I don't see this team making the playoffs, but it could hover around the middle of the pack. 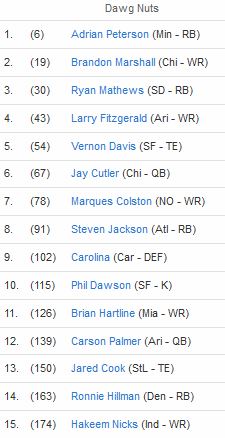 Pokorny's Take: Now we've got a championship-caliber team. The running back combination of Adrian Peterson and Ryan Matthews is excellent, and the wide receiver trio of Brandon Marshall, Larry Fitzgerald, and Marques Colston is music to the ears. Vernon Davis can be a nice point padder at tight end, and the Panthers defense is reliable. I'm not crazy about Jay Cutler at quarterback, but I do think Marshall and Jeffery will have big years, so I guess Cutler should be in for a big year too. 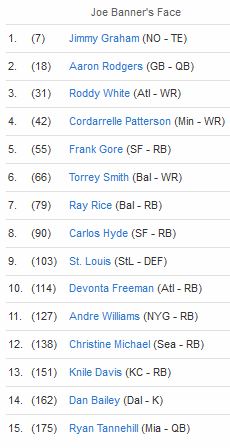 Pokorny's Take: Who takes a tight end in the first round!?! Joe Banner's Face (a.k.a Matt Wood). I like the first three rounds of the draft, but things went south after that. Is Cordarrelle Patterson really worth a fourth-round pick? Two Ravens with back-to-back picks in Torrey Smith and Ray Rice? RAY RICE!?! Then, not only does Matt take Frank Gore, he takes Carlos Hyde. Why waste an 8th-round pick on an insurance running back? The same thing happened in round 13 with Knile Davis. Ugh. Stick to radio, Matt. 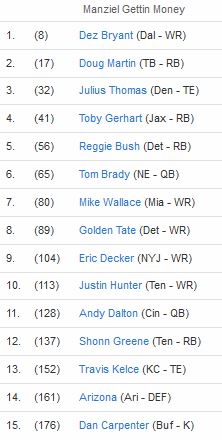 Pokorny's Take: Here is another draft that started well for the first three rounds before going south. Someone had to take Toby Gerhart in Jacksonville, and Zach wanted to be the guy to do it. We'll see how long that experiment lasts. Tom Brady is a good sixth-round pick, but I think there will be too much of a receiver predicament after Dez Bryant -- who is the other guy worth starting? Zach has a middle-of-the-pack team 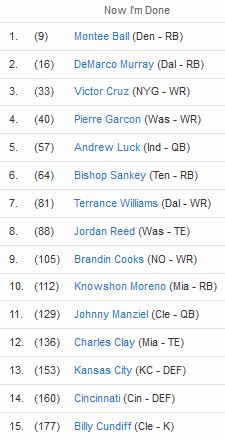 Pokorny's Take: This was the best the Unofficial DBN Fantasy League had to offer? First, I can't believe so many people are taking Montee Ball in the first round. We're going to see another Denver running back situation where another guy emerges as the team's leading back, while Ball gets sent to a backup role. I love Johnny Manziel too, but if we're taking fantasy football seriously, use a 15th round pick on him, not an 11th round pick. The best picks here are Jordan Reed and Knowshon Morento because the rounds they were taken in. 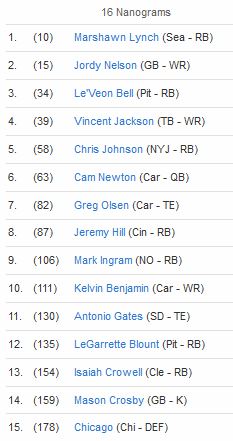 Pokorny's Take: It's hard to imagine Cam Newton having a good enough passing season in 2014, given his lack of receivers, to be a good enough fantasy quarterback. The first four picks are really good here, though, and Chris Johnson could be a surprise. I kind of question the direction of the draft after the 7th round -- it seems like TDSH took a lot of chances on backups. 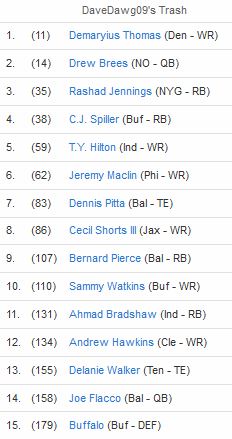 Pokorny's Take: Will C.J. Spiller ever live up to the hype? I'm beginning to think the answer is no, but after a down year in 2013, getting him in the fourth round this year could pay off big time. Once again, though, I see a roster that has the back end of its draft dedicated to backups. The core here should be Demaryius Thomas, Drew Brees, and T.Y. Hilton, which is only enough to put the team in the middle of the pack. 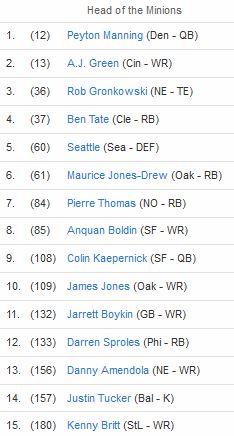 Pokorny's Take: Bang, there is your elite team. You could say that I potentially got the top quarterback, wide receiver, tight end, kicker, and defense. For the second year in a row, I went soft on my running backs, but I was thrilled to be able to get Ben Tate at the beginning of the fourth round, and I think Maurice Jones-Drew is in for a bounce back year based on what I saw in the preseason. After A.J. Green, I still managed to find teams' No. 1 receivers in the back half of the draft, and I think Darren Sproles will be heavily utilized in the Eagles' offense. Is it too early to say that I'm a lock for the trophy?

Be sure to vote on whose drafts you like the best, and let us know your thoughts in the comments section below! You can also use this thread for Week 1 fantasy advice in general.