Marlon Moore returns from serving a one game suspension for violation of the league's infamous substance abuse policy. He looked to be one of our top special teams players this preseason, excelling as both a kickoff returner and gunner on punt coverage.

The Browns also addressed the tight end position by signing Gerell Robinson, a player who was with the Denver Broncos but didn't survive the final cuts due to the tremendous amount of playmakers on that roster. Sadly, I think this move suggests that the injury to Jordan Cameron's shoulder may cause him to miss some significant time. We'll have to wait and see.

Back on August 30th, I mentioned a group of players cut by other teams that I thought the Browns should have on their radar. TE Gerell Robinson was one such player:

TE/H-Back Gerell Robinson - A converted wide receiver, Robinson is an athletic "move" tight end in the mold of a poor man's Jordan Reed. He possesses good agility and quickness for blocking in space as well as picking up yards after the catch. He also is a reliable hands catcher with the ability to go up and make the tough grab in traffic.

In order to make room for these two players, the Browns released cornerback Aaron Berry and offensive lineman Ryan Seymour.

I'd like to highlight something Gerell Robinson may be able to add to our offense: 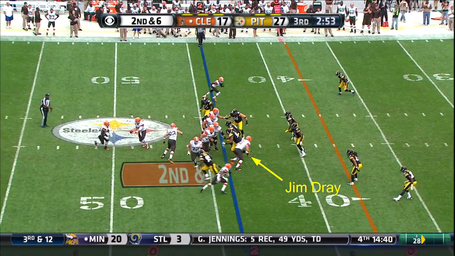 This is a playaction fake, but at this point it looks like it's going to be an outside zone run to the right, a play we ran over and over again versus the Steelers to a tune of over 6 yards per carry. Notice QB Brian Hoyer faking the handoff and tight end Jim Dray leaking out off the line of scrimmage and into his pass route (above). 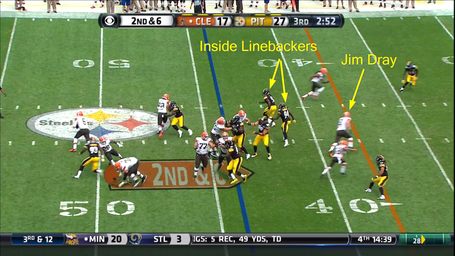 Now Hoyer has completed the fake and is rolling out to survey the defense and locate his receivers. The inside linebackers have come up to stop the run and Jim Dray is now behind them and into the secondary. 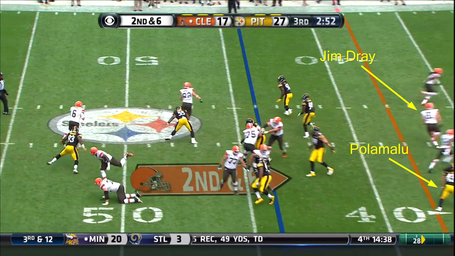 Strong safety Troy Polamalu has also come up too far on the play, leaving only two cornerbacks and one safety to cover Travis Benjamin, Taylor Gabriel, and Jim Dray. The corners are in man-to-man with the receivers and the free safety is in deep zone coverage. This leaves Dray all alone and wide open. 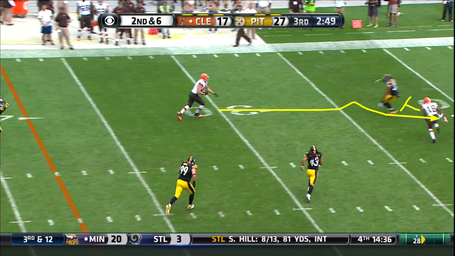 Dray catches the ball in space with one man to beat. If he is quick and fast enough, he can close the distance to the cornerback, fake an outside move, and cut inside allowing Gabriel to get a block on the corner before Polamalu catches him from behind. 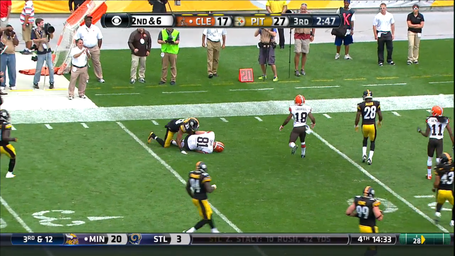 Unfortunately, Jim Dray doesn't have anywhere near enough speed for that and is tackled after picking up just seven yards after the catch. This was an excellent play and a big gain, but it could have been much, much bigger with a more athletic player on the receiving end.

Hello, Gerell Robinson, welcome to Cleveland. According to NFL Draft Scout, Jim Dray logged a 4.82 40 yard dash at his Stanford Pro Day. Robinson ran a 4.54 at the NFL Combine. More importantly, if you look at the video above, you can see an agile, coordinated athlete who can change directions in space and even make players miss (check out 4:09 in the video for an extreme example of this). If Robinson can prove to the coaches that he can be trusted to consistently pick up his blocking assignments, he has the potential to become a potent weapon in the passing game. Don't expect it to happen this Sunday, but he may have a role in the offense in week 3 versus the Ravens or after the bye against the Titans in week 5.

Just to clarify, I'm not saying that Robinson will replace Jim Dray. In fact, if Cameron misses any time I fully expect Dray to be our #1 tight end. That being said, Dray's most valuable asset is his sound blocking. In the play I broke down above, Gary Barnidge stayed in to block while Dray was the primary receiver. I could see similar plays called for Robinson as the primary target with Dray being kept back to sell the fake and pass protect.

"He was a guy that we had -- [GM Ray Farmer] always carries a short list of guys that he would like to [add]: we'll always be rolling the bottom of the roster and rolling the practice squad especially and I think he was a guy that was near the top of the short list and we wanted to get him in and get a look at him and this was a good week for it with playing a tight end like Jimmy Graham who plays really like a tall wideout at times."

"Well, Robinson is a converted wideout. We feel we have two pretty good blocking tight ends in Barnidge and Dray, thought they did a solid job in the game and also they weren't just, it wasn't like having a third tackle, they were both more than functional in the pass game, caught the balls that were thrown to them, got open, ran the right route, they were dependable. But where Jordan was, you know, the reason Jordan had separated himself from that group is just a different skillset: to have that guy who's more of an athlete, can stretch the field -- that's the type we were looking for and that's what Robinson we hope can bring to us: is an athletic, a guy that has wide receiver type skills yet he's still functional in the run game if he does have to block; he's not just a wide receiver."