Tonight, the NFL season officially comes to a close when the New England Patriots take on the Seattle Seahawks in Super Bowl XLIX. Kickoff time is scheduled for around 6:30 PM ET. Here is my official prediction for the game:

Related Links: Why the Patriots Will Win | Why the Seahawks Will Win 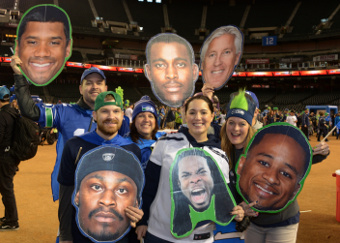 The Seahawks' fans are ready, but are their defensive stars (Richard Sherman and Earl Thomas) as healthy as they are letting on? Credit: Kirby Lee-USA TODAY Sports

Patriots Defense: The Patriots were a much-improved defensive team from a year ago. During the regular season, they were the 13th-ranked defense in the NFL, including 9th against the run and 17th against the pass. They are impressive down in the red zone at holding teams to field goals; they only allowed a touchdown in the red zone 47.83% of the time, which was the 6th-best mark in the NFL.

The Patriots don't have a featured pass-rushing specialist, as linebacker Rob Ninkovich led the team with 8 sacks, followed by Dont'a Hightower (6) and Chandler Jones (6). The big key for Ninkovich and Jones will be to contain the edges on the outside and prevent Seahawks quarterback Russell Wilson from becoming a threat in the running game.

When Wilson can take off at-will, the Seahawks are tough to stop. When Wilson can't get started, as was the case last week against the Packers, things get rough pretty quickly. Setting the edge would also try to force running back Marshawn Lynch to run between the tackles, where New England has a lot of bulk with defensive tackles Vince Wilfork and Alan Branch. The Seahawks like to throw the ball to Lynch often, so I would expect Hightower to have the responsibility of watching him in coverage throughout the game.

The Patriots have a big advantage with cornerback Darrelle Revis in their secondary this year. He could line up against either wide receiver Doug Baldwin or Jermaine Kearse, but I'm expecting him to face Baldwin with Kearse being defended by cornerback Brandon Browner. Cornerback Kyle Arrington rounds out a group that, according to Pro Football Focus (PFF), have given up just 215 passing yards this postseason to Joe Flacco and Andrew Luck.

Seattle's receivers will be looking to go deep and scramble with Wilson, but the Patriots' corners have the coverage abilities to stay with them for a long period of time. They won't have two safeties in help very often, as safety Patrick Chung is one of the better run-stopping safeties in the league and will also be up at the line to try to help stop Lynch or Wilson from getting started.

Seahawks Defense: The Seahawks were one of the best defenses in the NFL last year, and they out-did themselves this year. They ranked 1st in the NFL during the regular season -- 3rd against the run and 1st against the pass. When the Seahawks went 9-1 over their final 10 games of the regular season, they allowed an average of just 11.3 points per game. Things got even better during their 6-game winning streak to end the season -- it was a stretch in which Seattle's defense allowed an average of just 6.5 points per game.

We all know that the Seahawks' secondary, on paper and on gameday, is the best in the NFL. No team in the league can shut down the opposition like cornerbacks Richard Sherman and Byron Maxwell, and safeties Earl Thomas and Kam Chancellor can. That is a Pro Bowl unit in itself right there. The big question mark heading into this week's game is whether or not the unit is too banged up to be their dominant selves. While the Seahawks aren't making excuses, Thomas is battling a dislocated shoulder and Sherman is coming off of a hyperextended elbow. To make matters worse, Chancellor banged up his knee during practice this past week. All of them are expected to play, but at what level?

When it comes to generating a pass rush, the Seahawks are above average. According to PFF, defensive ends Michael Bennett and Cliff Avril are 3rd and 4th in the NFL at generating a pass rush. Another nugget from PFF: "Seattle brings five or more pass rushers on one in every four pass plays. On the plays where they rush with five or more rushers, they get pressure on the quarterback half the time. When they bring four or fewer rushers, then they only get pressure one third of the time." To negate that pass rush and also test whether the Seahawks' secondary is healthy enough to defend their offense, I'd expect quarterback Tom Brady to fire the ball within two seconds of getting the snap. 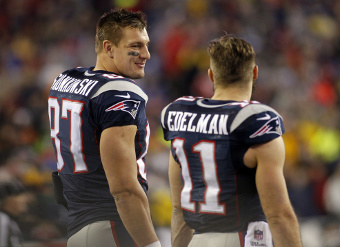 Patriots Offense: During their streak in which they won 10 of 11 games, the offense averaged 34.5 points per game, an incredible amount compared to the rest of the NFL. Points haven't been a problem in their two postseason wins over the Ravens and Colts, when they scored 35 and 41 points, respectively.

To say that New England's offense is "clicking" right now would be an understatement, which is why it's hard to imagine them laying the type of egg that the Broncos did in last year's postseason. Quarterback Tom Brady will be going for his fourth Super Bowl ring, but his first in over a decade. We all know about Brady's accolades, so let's look at the rest of his team.

At receiver, Julian Edelman put up another strong year as a possession receiver with 92 receptions. Brady particularly likes to throw the out route to him, according to PFF, but they might want to mix it up for the Super Bowl to prevent Seattle from jumping those routes. Coming over from the Panthers, receiver Brandon LaFell proved to be one of the best free agent acquisitions of the offseason at his position. Neither of those receivers are particularly dominant in one-on-one battles, but they excel at running good routes and having the right amount of chemistry with Brady.

Tight end Rob Gronkowski is the biggest threat on offense. Even with a slow start to the year as he recovered from injury, he still had 1,124 yards receiving and 12 touchdowns during the regular season. There is no doubt that Gronkowski will be a big part of the gameplan, but a sneaky element to the Patriots' offense is that their backup tight ends can make some plays down the field too. By my account, tight end Tim Wright was underutilized compared to his potential. New England is always looking to surprise teams with a new wrinkle to their offense, and for all we know, this week that could involve showcasing Wright.

The Patriots have seemed to settle in to running back LeGarrette Blount as their leading ballcarrier and Shane Vereen as their receiving/blocking back. Blount is a bruiser and could find similar success to what the bulky Eddie Lacy found against the Seahawks last week. We've also seen New England scrap the running game in favor of only throwing the ball too, so anything could happen on Sunday, and that's part of the brilliance of Josh McDaniels' playcalling and Brady's command of it.

Seahawks Offense: Quarterback Russell Wilson will be going for his second Super Bowl in as many years and the possibility of establishing a new dynasty in the NFL. Wilson makes a living off of ball security, which is why it was surprising to see him throw 4 interceptions in the NFC Championship after having 7 turnovers all season. Although Wilson likes to scramble when plays break down, as a passer, he's most effective when he gets rid of the ball right away. He needs to find a way to get the read-option going again, as his 849 yards rushing in the regular season were tops in the NFL among quarterbacks.

The Seahawks ranked 9th in the NFL on offense during the regular season -- 1st in the running game and 27th in the passing game. That type of disparity tells you just how important and effective the Seahawks' rushing attack has been, led by the one and only Marshawn Lynch. Lynch combined for over 1,600 yards and had 17 touchdowns during the regular season, and he gets even better when the prime time lights are on in the postseason. There is a reason that the nickname "Beast Mode" caught on so quickly, and that's because Lynch is no fluke: he is a one-man wrecking ball who cannot be stopped.

The Seahawks' top wide receivers are Doug Baldwin and Jermaine Kearse. Compared to the rest of the NFL, this is probably Seattle's weakest position on the team, but they've made due with what they have. If their is a sleeper in the passing game, it would have to be tight end Luke Willson. He only had 362 yards in the regular season, but he was a late bloomer, so-to-speak. He's been targeting more frequently over Seattle's last four games (including the playoffs), and against the Panthers in the divisional round, he had 4 catches for 68 yards and 1 touchdown.

The winning formula for Seattle is to win the time of possession battle, which they ranked 3rd in the NFL at. Even if they don't score points, if they can pin the opposition back and let their defense put the pressure on the other team, they win the battle of field position. Once things get hot, they stay hot, as we saw in last year's Super Bowl.

I don't have a specific rooting interest in this year's game. I respect the fact that New England and Seattle have built such dominant and potentially long-lasting franchises -- the Patriots are near the end of their reign as Tom Brady gets older, while it looks like Seattle's reign is just beginning. We got a taste of winning this year (7-9), but it still wasn't good enough. This is the part of the season I want the Browns to be a part of again. There are a lot of former Browns players, coaches, or front office people on both teams, which you can review here.

Both of these teams have plenty of playoff experience, and I don't anticipate that the obsession over "DeflateGate" will have a big impact over the game. I expect this to be a low-scoring and defensive battle early as both teams run the ball and try to play field position. I think Seattle will jump out to an early second half lead, and then New England will unleash Brady and the passing game again as the contest turns more into a shootout type of game in the second half, with the Patriots ultimately coming out on top.

Additionally, I'll take Tom Brady to be the MVP, and for the pre-game National Anthem to last 2:08.

If you want to make your own prediction, please do so in the DBN Super Bowl XLIX Pick'em Thread!