Which Players on the Cleveland Browns Could Become Roster Casualties?

Despite all of the cap space they already have, we break down how much money the Browns could save by cutting five players.

Share All sharing options for: Which Players on the Cleveland Browns Could Become Roster Casualties?

Why would the Cleveland Browns, a team with approximately $53.735 million in cap space, need to consider cutting players on their roster? Besides the obvious reason of saving money, there are several other reasons:

Even though the Browns have such a large amount of available cap space this season, they might want to open up more cap space in future seasons. For example, let's say that "Player X" has $2 million guaranteed in 2015, and $4 million guaranteed in 2016. Ray Farmer might think to himself, "this player won't help us as much as we thought, and we could really use an additional $4 million in cap space in 2016." The solution? Cut the player this offseason and pay him $6 million against the cap this year (space which otherwise might have gone unspent), thereby freeing up $4 million in cap space in 2016.

Another reason is because you want to be big spenders, but efficient at the same time. If a player isn't worth what you originally thought he was worth, it doesn't even matter about the savings: from a business standpoint, you cut your losses and re-invest that money elsewhere.

Also, remember that the Browns have ten draft picks, so they might need at least ten more roster spots this year: cuts will have to be made, whether it's from the bottom of the roster or closer to the top. Lastly, with any of the extra money saved, you could turn around and re-invest it in one of your core players, such as Tashaun Gipson, and you can front-load a lot of their money this year in order to build cap space in future years.

All of the news and nuggets related to the Cleveland Browns at the 2015 NFL Combine, including player visits.

Two years ago, I listed LB Chris Gocong, QB Colt McCoy, S Usama Young, OG Shawn Lauvao, and FB Owen Marecic as players who could be cap casualties. The only player who survived into the regular season was Lauvao, so getting 4/5 players correct was great.

This year is really tough. When I look at the 2015 cap figures for players on the team, there aren't any names that jump out at you as being worthy of a cut. The one player I would have put at the top of my list, OG Paul McQuistan, was already cut last week, saving the team $1.335 million. That might end up being the only cap-saving cut the team makes when the offseason is all said and done.

With all of that in mind, this year's column is less about who will be cap casualties and more about who could end up being released if certain circumstances arise. That is why I re-named the title of the column from "cap casualties" to "roster casualties," although my discussion will still be heavily-cap-based.

Disclaimer: The five players are listed in order of how much money they make against the cap. A player being listed does not imply that I think they will be cut; instead, it represents an explanation as to why they could potentially be cut or traded, from a cap space perspective.

1. Phil Taylor, DL (8th Highest Cap Figure) - Last May, fans were excited when the Browns decided to pick up the fifth-year option on the Taylor's rookie contract. Unfortunately, Taylor's fourth year with the club and his first under head coach Mike Pettine did not go too well.

At the beginning of the year, Taylor made the switch from nose tackle to defensive end, a transition which seemed to lessen his effectiveness. Taylor played in the team's first four games of the regular season before having arthroscopic knee surgery. He returned in prime time for the team's Week 10 matchup against the Cincinnati Bengals, a game that he almost single-handedly dominated in the trenches. It was an impressive effort, but then he immediately had to have season-ending surgery on his knee.

The Browns' defensive line struggled last year and they will be looking to upgrade the position this offseason. Taylor's cap hit for 2015 is $5.477 million, and the Browns won't owe him any money if they decide to cut him. I am in favor of retaining Taylor, but there has to be concern over the fact that he's missed 20 games in his first four years.

Desmond Bryant should occupy one of the defensive end positions. The Browns could try to make a big splash by signing a big-name defensive lineman (Ndamukong Suh), and adding another defensive end in free agency or the draft. Then, you've got Billy Winn and John Hughes as your depth players. If Cleveland chooses to go that route, they could cut Taylor and use that $5.477 million toward one of the players they sign in free agency. Is it better to front-load a contract for a new player now, rather than using it on a player (Taylor) who might not be back in 2016? Perhaps. I'd bank on Taylor staying with the Browns, but I tried to explain a scenario in which it could make sense.

UPDATE: A clarification that Phil Taylor's 5th year option becomes guaranteed on March 10th, so the Browns would need to make a cap decision by then.

2. Jim Dray, TE (13th Highest Cap Figure) - When you see Dray's name, it's an example of just how unimportant it is for the Browns to make any cap casualties in 2015 beyond what they've already done. Dray signed a three-year deal last offseason. This year, he is set to make $1.90 million against the cap. If the Browns cut him, they would only have to pay Dray $600,000 this season. I will talk more about Dray in the next person's area, considering the circumstance. 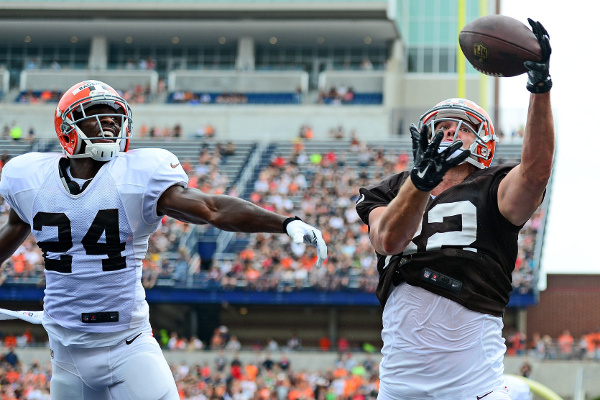 Two candidates for roster cuts down the road for the Browns, depending on what happens with TE Jordan Cameron, are TE Jim Dray and TE Gary Barnidge (pictured above). Photo Credit: Andrew Weber-USA TODAY Sports

3. Gary Barnidge, TE (17th Highest Cap Figure) - Barnidge is in the final year of his three-year contract with the club. He is set to make $1.20 million against the cap in 2015, and cutting him would cost them nothing. Combined, Dray and Barnidge are set to make $3.1 million in 2015. There is no way the Browns will cut both of them, especially because of the situation with TE Jordan Cameron.

We take a look at the five most important players among the Browns' free agents and see how much it would cost to utilize the franchise tag on them.

Cameron's situation could dictate what the club does with either of these players. Even though the Browns have a surplus in cap space, sometimes you still like to think of how you can pad a certain move. For example, let's say the Browns franchise Cameron for $8.27 million. If you find an undrafted free agent ($435,000) and cut Barnidge, then you can think of Cameron's franchise tag really only costing $7.505 million, considering both he and/or Barnidge would be/would have been in their final year with the team.

Dray and Barnidge have different strengths and weaknesses when you get into the gritty details, but essentially, I view them as very similar players: No. 2 tight ends who are decent blockers and catchers. What Cleveland needs is a No. 1 tight end as a receiver, either Dray or Barnidge, and then a third tight end who is an excellent run blocker. If a move were to be made with either Dray or Barnidge, though, it probably wouldn't happen until well after free agency and the draft (and really, there's no pressing need for either player to be cut from a financial standpoint). 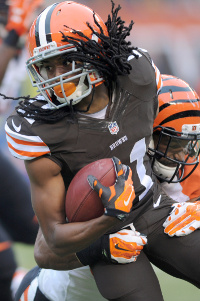 WR Travis Benjamin got off to a very slow start returning punts for the Browns in 2014. Photo Credit: Ken Blaze-USA TODAY Sports

4. Travis Benjamin, WR (21st Highest Cap Figure) - It was certainly a mixed bag for Benjamin last year. He had his best season as a wide receiver, but for all the speed he has, a Browns quarterback could not connect with him on the deep ball all season. On top of that, Benjamin faced season-long struggles as the team's punt returner, much of which seemed to stem from confidence issues as he came off of a torn ACL in 2013. He re-gained a little bit of his swagger late in the year, but was it enough?

People have wondered why CB Justin Gilbert didn't return kicks or punts last year. WR Taylor Gabriel could also be a candidate to return punts. If the team makes significant upgrades at wide receiver this year to the point where Benjamin would be fifth on the depth chart, they might decide to move on from him since he's in the final year of his rookie contract. Benjamin is set to make $779,250 in 2015, but the Browns would only owe him $119,250 if they chose to cut him.

5. Nick McDonald, C (22nd Highest Cap Figure) - The Browns decided to move on from veteran OL Paul McQuistan, and they might be best served moving on from McDonald before long too. He made his debut shortly after the injury to C Alex Mack last season but struggled to make a positive impact. By the end of the season, OL Ryan Seymour was replacing him as the team's fourth center of the season.

McDonald is set to make $745,000 in 2015, and cutting him would cost them nothing. Why hasn't he been released already? Although Mack is on track for a return from his broken leg, he might be held out of some of the team's offseason programs to start things off. The team will need a center to fill his void in the mean time, but when Mack is ready to give it a full-go again, I could see McDonald getting the boot in favor of an undrafted free agent on the 90-man roster.

Using all of these approximations, if four of these five players (we'll exclude Dray) were on the Browns in 2015, they would make a combined $8,201,250. Let's assume that the Browns decided to flat out cut Taylor, Barnidge, Benjamin, and McDonald. Cleveland would only owe Benjamin's $119,250, and nothing to everybody else, meaning it would create $8,082,000 extra cap space this year (plus some extra space in future years as well). This scenario would raise the Browns' overall cap space from $53.735 million to $61.817 million.

The Browns said they would be less active in free agency this offseason, but that doesn't mean they won't be willing to fork out a lot of money for one or two big-name players. Additionally, the extra cap space could be used to commit more money toward the likes of CB Buster Skrine (UFA) and FS Tashaun Gipson (RFA).

Please feel free to leave your thoughts on whether the Browns should cut ties with any of the players in this article, or if there are some other players you think are worth purging from the roster (without adverse cap effects). For example -- a cynic could suggest cutting QB Johnny Manziel, meaning the Browns would owe him a $6.499 million payday in 2015 but would free themselves of him moving forward (i.e. a move like that accelerates the cap hit to this year, when the Browns have plenty of space, but removes the cap hits for future years, when the team might need more space).