Reviewing whether it is worth it for the Cleveland Browns to retain veteran quarterback Brian Hoyer, who is an unrestricted free agent.

Over the next few weeks, I will be reviewing every player on the Cleveland Browns who is set to become a free agent if action is not taken by March 10th. There will be a common format for each review -- brief overviews on how and when the player came to the team, what their production was like, why we could be interested in re-signing them, what we should do, and finally, an open poll for the DBN community. We begin with quarterback Brian Hoyer. 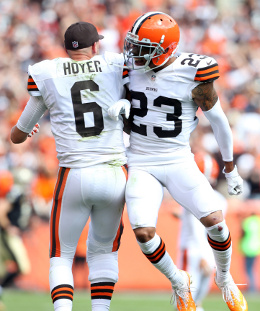 Browns QB Brian Hoyer had the support of his teammates and coaches most of the season, even amidst his struggles. Credit: Ron Schwane-USA TODAY Sports

How and When He Joined the Browns: In 2013, Hoyer was a prized free agent signing late in the offseason by former GM Michael Lombardi. Having been released by the Arizona Cardinals, the Browns brought Hoyer in as their No. 3 quarterback despite having Brandon Weeden and Jason Campbell on the roster.

After the Browns' 0-2 start in 2013, when Weeden went down with an injury, Hoyer leapfrogged Campbell on the depth chart. He won his first two games as the starter, but in his third game (also a victory), he suffered a torn ACL.

Productivity Level Last Season: Despite coming off of a torn ACL, Hoyer battled with first-round pick Johnny Manziel throughout all of training camp and was named the team's starting quarterback for the 2014 season. Hoyer got off to a great start to the year, posting a 6-3 record with 10 touchdown passes and 4 interceptions in his first nine games. He was minimizing the mistakes on offense and had led a couple of comeback victories.

Things started going south for Hoyer in Week 11 against the Houston Texans. Over his next four starts, the Browns went 1-3 and Hoyer threw 1 touchdown pass and 8 interceptions. There had been rumors that Manziel would replace him, and the final straw came when Hoyer could not provide an offensive spark against the Colts in Week 14 despite an epic performance by the defense on QB Andrew Luck. Hoyer played again in relief on Manziel in Week 16 due to injury, but a shoulder injury kept him out of the finale.

Why Keeping Him Could Make Sense: Toward the end of the season, the Browns' offense was getting uglier and uglier under Hoyer. However, when Manziel played, things got really bad. Whether it was a case of Manziel not being prepared, Kyle Shanahan sabotaging the team, or the rest of his teammates not being motivated, it started to shine a positive light on what Hoyer had been able to accomplish.

Hoyer and the offense hit a wall when C Alex Mack broke his leg. It's not a good sign that one player can have that significant of an impact on your team's offensive output, but it appeared to be the case. With Mack set to return in 2015 and Manziel's status in question, Hoyer can have the team in contention again if all of the other pieces start falling into place. His mobility could also see an improvement since he will be over a year removed from his ACL injury.

What the Browns Should Do: This is a very difficult decision, and I don't envy the Browns' front office for having to make it. Truth be told, there is no right or wrong move in regards to what to do at the quarterback position -- they are going to have to survey the options out there, roll the dice, and hope they made the right decision.

If the Browns aren't able to swing a trade for Sam Bradford, my preference would be to bring Hoyer back and go through the insanity of this competition again between he and Manziel. The price on Hoyer is tough to gauge -- when things were going well last year, there was a belief that his asking price would be $10 million per year. There is no way he is getting that type of money now, particularly from the Browns.

When it comes to Hoyer, I like to look at contracts for players I'd put in the same category of success -- Matt Cassel, Matt Schaub, Josh McCown, Matt Moore, and Ryan Fitzpatrick. That means we're talking about $4 million to $7 million per year. If I'm the Browns, I'd offer Hoyer the same contract that McCown got last year: 2 years, $10 million. In 2015, the contract would include $4.75 million in guaranteed money, and 2016 would include $5.25 million in non-guaranteed money. The contract could also have a lot of incentives included if Hoyer reaches certain statistical achievements.

With the amount of cap space Cleveland has, even if Manziel becomes the starting quarterback, it's not a deal that breaks the bank. The only other team I could see offering Hoyer a gig is the Buffalo Bills, but if Cleveland makes their offer first, I don't know if Hoyer can turn down that deal in a city where he knows at the very least he'll have a chance to start again, given what's happened with Manziel.

Now it's your turn -- vote in the poll below on whether or not the team should try to re-sign Brian Hoyer!