Reviewing whether it is worth it for the Cleveland Browns to retain quarterback Tyler Thigpen for another season.

Our next free agent review focuses on the team's other quarterback set to hit the open market, Tyler Thigpen. 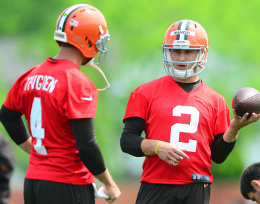 Manziel stares, puzzled, as to who this Thigpen character is and why he wants a rep. Credit: Andrew Weber-USA TODAY Sports

How and When He Joined the Browns: In April 2014, the Cleveland Browns invited two veteran quarterbacks -- Thigpen and Vince Young -- to their voluntary minicamp for tryouts. This was prior to the draft, so the team wanted another veteran arm on their roster as Brian Hoyer was still getting back to form from his ACL injury. Cleveland signed both quarterbacks, and later waived Young in May before he announced his retirement.

Productivity Level Last Season: Thigpen was with the Browns through the rest of the offseason and into training camp. When he received limited reps in camp and during a preseason game, he looked awful -- so bad that mid-way through August, the team outright cut Thigpen and signed veteran quarterback Rex Grossman instead.

Thigpen was without a team the rest of the year until Week 17 of the season. With the Browns having injuries to both Hoyer and Manziel, Connor Shaw was going to start and needed a backup. The Browns called Grossman first, but he told them, "no thanks." Thigpen didn't mind taking the free paycheck for a week of holding the clipboard.

Why Keeping Him Could Make Sense: He can be signed for the veteran minimum. With Manziel in rehab, if the Browns don't sign a bigger-name in free agency and opt to draft somebody, the only quarterback they'd have on the roster for some of the pre-draft offseason programs would be Shaw.

Now it's your turn -- vote in the poll below on whether or not the team should try to re-sign Tyler Thigpen!