Reviewing whether it is worth it for the Cleveland Browns to retain running back Shaun Draughn for another season.

Our next free agent review focuses on an exclusive-rights free agent, running back Shaun Draughn. 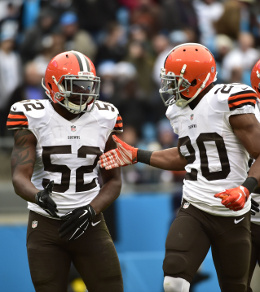 Draughn was also signed because he had more experience on special teams than Winston. Credit: Bob Donnan-USA TODAY Sports

How and When He Joined the Browns: Mid-way through last season, the Browns made the decision to cut RB Ben Tate and roll with a trio of rookie running backs -- Terrance West, Isaiah Crowell, and Glenn Winston. Of the three, Winston never saw action on offense, so it became more of a two-back system.

There were concerns about how well the rookies could handle pass protection, so when WR Miles Austin went on injured reserve in mid-December, the Browns went out and signed Draughn to fill his roster spot.

Productivity Level Last Season: Draughn was with the Browns for the final four games of the regular season. He immediately contributed as a coverage player on special teams. He played 8 snaps against the Panthers in Week 16 but did not touch the football.

Why Keeping Him Could Make Sense: The commitment at running back next season will be to a combination of West and Crowell, but this team does need to find a No. 3 running back, ideally who can fill in for third-and-long passing situations. A lot of money won't need to be spent on that guy, and Draughn has a couple of weeks of experience in Cleveland's system.

What the Browns Should Do: The ERFA label applies to players who have less than three accrued seasons in the NFL (i.e. 6 games or more on the roster or IR). Under the ERFA rules, the Browns could offer these players a one-year tender worth $585,000, which is equivalent to the minimum salary for a player with two accrued seasons. If the Browns make an offer to an ERFA, no other team would be able to sign the player.

I'm indifferent to Draughn. If the Browns want to keep him as a semi-veteran presence, I guess that's fine. My preference would be to add a couple of undrafted free agents after the draft, and let them compete with Winston for the third running back spot. Draughn isn't a diamond in the rough, but one of those undrafted guys could be.

Now it's your turn -- vote in the poll below on whether or not the team should try to tender Shaun Draughn!