Reviewing whether it is worth it for the Cleveland Browns to retain veteran wide receiver Miles Austin, who is an unrestricted free agent. 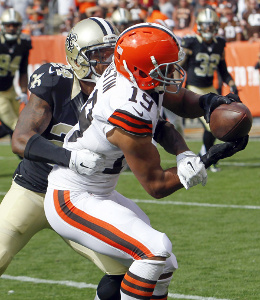 How and When He Joined the Browns: Last March, the Dallas Cowboys released Austin, who had been hampered by injuries for a couple of seasons. Cleveland didn't draft a receiver and with WR Josh Gordon facing a suspension, the team was looking to add some veteran depth.

Mid-way through May, the team signed both Austin and WR Earl Bennett. Bennett was cut in mid-June, and although Austin was being rested through many of the offseason programs due to his fragile nature, he made it through camp healthy and made the final roster.

Productivity Level Last Season: Austin assumed the role of being the team's No. 1 receiver on the depth chart. He wasn't a threat for the long-ball, but he was counted upon and delivered in many clutch situations. He finished the year with 47 catches for 568 yards and 2 touchdowns, which exceeded the expectations I had set for him.

Austin made it through the regular season injury-free until he suffered a lacerated kidney against the Buffalo Bills (ouch!). That was the game where he, kind of stupidly, tried to hurdle defenders at the sideline when QB Johnny Manziel was playing in relief of QB Brian Hoyer. That ended Austin's season.

Why Keeping Him Could Make Sense: Although WR Andrew Hawkins is kind of a veteran receiver, Austin proved he was a valuable commodity in 2014 and has reliable hands to help move the chains. He's not a giant receiver, but at 6-2, he probably felt like one in a group that included Hawkins, Taylor Gabriel, and Travis Benjamin.

What the Browns Should Do: Last year, Austin signed a 1-year deal worth $2 million, and I'd expect him to want something similar in 2015, even at 30 years of age. It might be a little bit of a steep price, but the Browns can afford it, and I'm a supporter of having that one veteran presence on the team, even if we move Austin to No. 3 on the depth chart depending on what else happens in free agency and the draft.

If Cleveland doesn't try to re-sign Austin, it's a sign that they'll be looking to address the position elsewhere in free agency (i.e. Cecil Shorts) or in the draft. In an article on Browns.com earlier this month, Austin said that he'd like to return to Cleveland due to the bond he formed with assistant coaches and players, and how Mike Pettine prepared the team.

Now it's your turn -- vote in the poll below on whether or not the team should try to re-sign Miles Austin!