Reviewing whether it is worth it for the Cleveland Browns to retain veteran wide receiver Marlon Moore, who is an unrestricted free agent. 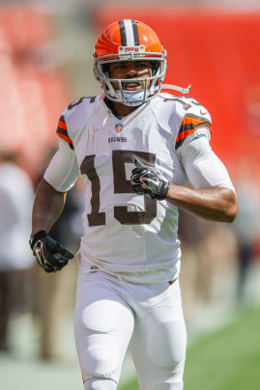 How and When He Joined the Browns: The Browns signed Moore at the end of July 2014, right before the start of training camp, to a one-year deal. He was signed with the team knowing that if he made the roster, he'd have to serve a one-game suspension to start the year.

Productivity Level Last Season: Moore only played a handful of snaps at wide receiver on the year. His primary contributions came as a special teams ace. He led the team with 13 kick returns for 322 yards, a 24.8 average. Those numbers don't jump off of the page, but we're in a league where kickers usually just boot the ball out of the back of the end zone. At the end of the season, Moore had a couple of really nice kick returns, including a touchdown, called back due to penalties.

Moore was second on the team with 9 special teams tackles and he also forced a fumble. His highlight game came in Week 14 against the Indianapolis Colts, when he shut down WR Joshua Cribbs with three smashing tackles, including the aforementioned forced fumble.

Why Keeping Him Could Make Sense: Moore was a really good gunner for the Browns, helping lead a unit that was in the top 10 in kick and punt coverage.

What the Browns Should Do: The Browns stuck with Moore most of last season, but I think the front office will finally concede that they need to address the struggles of the return game in 2015. While Moore would be nice to have as a gunner, you need special teams players to be as versatile as possible, and in Cleveland's case, that means retaining a guy like Johnson Bademosi instead or finding some new blood. If Moore is retained, his price tag should only be the veteran minimum.

Now it's your turn -- vote in the poll below on whether or not the team should try to re-sign Marlon Moore!