Reviewing whether it is worth it for the Cleveland Browns to retain tight end Jordan Cameron, who is an unrestricted free agent. 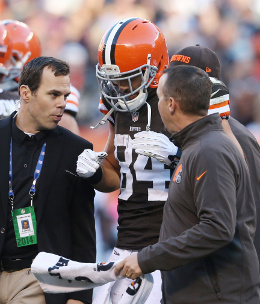 How and When He Joined the Browns: With TE Benjamin Watson on the roster, the Cleveland Browns selected Cameron in the 4th round of the 2011 NFL Draft. He basically did not see the field as a rookie, and only saw limited action in 2012. His breakout year came in 2013, when he was the team's full-time starter.

Productivity Level Last Season: Coming off of a career season, Cameron had a less-than-ideal contract year. He only played in 10 games, catching 24 passes for 424 yards and 2 touchdowns. He missed five games past the half-way point of the season due to a concussion. His highlights on the year came against Pittsburgh and Carolina, when he had touchdowns of 51 and 81 yards, respectively.

Why Keeping Him Could Make Sense: Despite his concussion issues, Cameron is still one of the league's better receiving tight ends. If he had played all 16 games last year, his stats would have projected out like this: 38 catches, 678 yards, and 3 touchdowns. That's still a down season, but it was also a year in which the Browns had a great commitment to the running game. Cameron is also the best receiver on the team with some size -- if you lose him, how do you make up that size at both tight end and wide receiver?

What the Browns Should Do: I've already explained that I feel the Browns should use the franchise tag on Cameron as a one-year solution, and then re-evaluate their position on him in 2016.

If the Browns are able to re-sign Cameron to a new deal, tight ends in his caliber are seeking pretty standard deals these days: 5 years, $36 million. Cameron wasn't able to showcase that value to the Browns last year, but can you take that threat away from the team without a viable replacement waiting in the wings? That's why I prefer re-evaluating the situation in 2016 rather than letting him walk.

Now it's your turn -- vote in the poll below on whether or not the team should try to re-sign Jordan Cameron!