Reviewing whether it is worth it for the Cleveland Browns to retain defensive lineman Ahtyba Rubin, who is an unrestricted free agent. 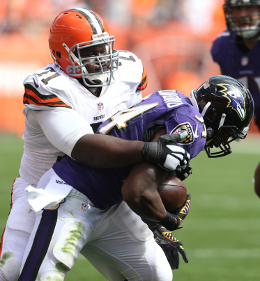 How and When He Joined the Browns: Of the players on the Browns' roster last year, Rubin is the second longest-tenured player with the team, only behind LT Joe Thomas. Rubin was a sixth-round pick by the Browns in 2008, initially beginning his career as a reserve played behind DT Shaun Rogers. He became a starter in 2010, and an impressive full season with 82 tackles, 2 sacks, and hustle on every given down earned him a new contract.

Productivity Level Last Season: This past season might have been Rubin's worst as a pro. I never quite understood the decision to make him the nose tackle over Phil Taylor at the beginning of the year. Rubin was ineffective, finishing the year with 28 tackles and 1 sack.

You don't expect big-time stats from the nose tackle position, but anyone who watched the Browns' defensive line in 2014 knows how easily the opposition was able to run the ball. The coaching staff kept hinting that Rubin was playing through a nagging injury all season, hence the reason for his struggles.

Why Keeping Him Could Make Sense: I believe that Rubin's injury played a part in his struggles, and so did playing him out of position. If Mike Pettine feels a healthy Rubin can be a good depth player, preferably as a backup, then he would have some value in that role.

What the Browns Should Do: It's time to say goodbye to Rubin. I feel a little bad -- usually I'm sentimental toward players who have been with the team for a long time (seven years in Rubin's case), but I don't feel that same allegiance toward Rubin. He was known for his hustle and effort early on in his career, and I don't think he fit the 3-4 defense nearly as well. He's missed eight games due to injury over the past three years and is approaching 30 years of age. Reports have said that he's looking forward to seeing what's out there for him (beyond Cleveland), so I wouldn't invest my resources in keeping a guy who would be average at best in this defense.

Now it's your turn -- vote in the poll below on whether or not the team should try to re-sign Ahtyba Rubin!