Reviewing whether it is worth it for the Cleveland Browns to retain nose tackle Ishmaa'ily Kitchen, who is an restricted free agent. 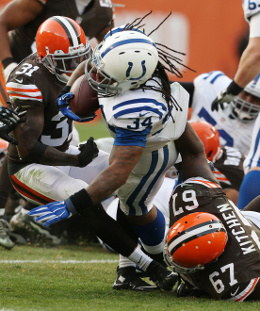 How and When He Joined the Browns: In 2012, the Cleveland Browns claimed the massive 6-3, 334 pound defensive tackle from Kent State. Kitchen had been was signed by the Baltimore Ravens as an undrafted free agent, but was released before the start of the season.

Productivity Level Last Season: Despite only playing in 12 games (3 starts) this past season, Kitchen had the best statistical season of his career by far, notching 43 tackles on the year. He was rated a slightly below average player by Pro Football Focus, but his ranking was pretty respectable, all things considered.

Why Keeping Him Could Make Sense: The Browns are probably going to overhaul the defensive line this year, but you don't want to lose too many pieces because you can't overturn a unit that drastically in one offseason. Kitchen is coming off of his best season and he could maintain his role as the backup nose tackle.

Kitchen has made the minimum salary in each of his three seasons with the Browns. I don't see the team using an original round tender of $1.431 million on Kitchen. I would let Kitchen become an unrestricted free agent, and then he will probably see what the market is from other NFL teams. If nobody wants him and he'll accept a minimum contract with the Browns for two years, then I'd keep him. If not, the line needs overhauled anyway, so we won't be losing too important of a piece.

Now it's your turn -- vote in the poll below on whether or not the team should try to re-sign Ishmaa'ily Kitchen!