Reviewing whether it is worth it for the Cleveland Browns to retain defensive lineman Sione Fua, who is an unrestricted free agent. 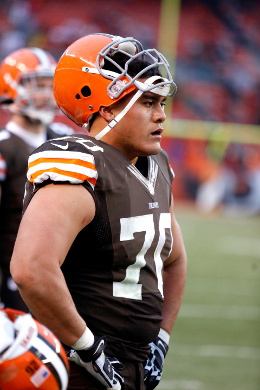 How and When He Joined the Browns: A third-round pick in 2011 by the Carolina Panthers, the Browns signed Fua this past October because of all the injuries that were piling up on their defensive line.

Productivity Level Last Season: Fua was initially viewed as a temporary solution, but the defensive linemen were dropping like flies. Fua finished the season playing 11 games with 12 tackles, but it was far from an impactful year for him. Pro Football Focus ranked Fua near the bottom of the barrel among defensive linemen, along with Ahtyba Rubin.

Why Keeping Him Could Make Sense: Experience in the system? Depth? Usually I try to be optimistic in this section, but I'm running a bit thin when it comes to Fua.

What the Browns Should Do: Don't even make him an offer. Fua was utilized out of desperation almost, and in 2015, the team would rather give an undrafted free agent a shot at proving his worth in training camp.

Now it's your turn -- vote in the poll below on whether or not the team should try to re-sign Sione Fua!