Reviewing whether it is worth it for the Cleveland Browns to retain inside linebacker Craig Robertson, who is a restricted free agent.

Our next free agent review looks at inside linebacker Craig Robertson. 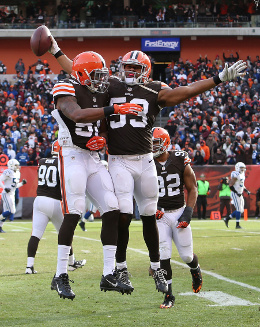 How and When He Joined the Browns: Robertson was signed by the Cleveland Browns as an undrafted free agent in December 2011 to the team's practice squad. Since he was barely on the team that season, he was basically viewed as a rookie in 2012 when he made the team and became a regular contributor.

Productivity Level Last Season: Robertson finished the 2014 season with a career-best 99 tackles. He had 2 interceptions and went from being a liability in coverage the previous season to a respectable player in coverage. When ILB Karlos Dansby missed several games late in the year with an injury, Robertson stepped up as the leader of the team and played some of the best football of his career.

Why Keeping Him Could Make Sense: Although the Browns aren't overflowing with depth at inside linebacker, it was clear how valued Robertson was last year as a complement to Christian Kirksey and then depth behind Dansby. He is an all-around good player, being graded as a +2.2 by Pro Football Focus for his work this past season.

In terms of value, I wouldn't mind placing a 2nd round tender on Robertson (worth about $2.356 million). However, I think the Browns can get away with putting the original round tender on him of $1.542 million, which is still a nice bump from the $570,000 that Robertson made on 2014. The risk is that a team could offer Robertson a new deal and if Cleveland doesn't match, they'd receive no compensation. I don't think the demand outside of Cleveland will be high enough for a team to go after him -- the Browns did it with Andrew Hawkins last year, but it's a rarity in the NFL.

Now it's your turn -- vote in the poll below on whether or not the team should try to tender Craig Robertson!