Reviewing whether it is worth it for the Cleveland Browns to retain outside linebacker Jabaal Sheard, who is an unrestricted free agent.

Our next free agent review looks at outside linebacker Jabaal Sheard. 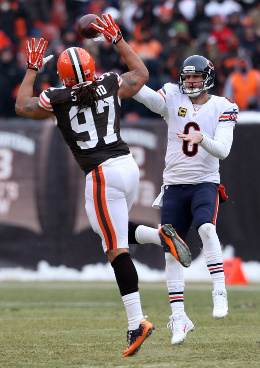 Browns OLB Jabaal Sheard didn't have the type of contract year he was hoping for. Credit: Ron Schwane-USA TODAY Sports

How and When He Joined the Browns: Sheard was a 2nd round draft pick (37th overall) by the Cleveland Browns in 2011. He began his career as a defensive end in a 4-3 defense, notching 8.5 sacks as a rookie.

Productivity Level Last Season: In his second year since transitioning to the outside linebacker position, it was a bit of a forgetful year for Sheard. He became more of a rotational player and finished the year with just 44 tackles and a career-low 2 sacks -- this coming after speculation that Mike Pettine would try to utilize him everywhere like he did with Mario Williams in 2013.

Sheard deserved credit for gutting out the second half of the season with a foot injury, but he was playing third fiddle behind Paul Kruger and Barkevious Mingo.

Why Keeping Him Could Make Sense: You can't question Sheard's toughness -- he could have easily called it quits to let his foot heal to 100 percent, but he played through the pain instead. Perhaps a sign that he did a lot of the "unsung hero" business of the defense is the fact that he was given a grade of +8.2 on the season by Pro Football Focus.

What the Browns Should Do: Sheard might have done some good things last season, but with the cap space Cleveland has, if they are going to invest anything more at outside linebacker, it is going to be on a player who can get to the quarterback more often. The rumors on Twitter is that Sheard won't be back, and Cleveland should focus on investing their resources elsewhere.

Now it's your turn -- vote in the poll below on whether or not the team should try to re-sign Jabaal Sheard!