Reviewing whether it is worth it for the Cleveland Browns to retain cornerback Buster Skrine, who is an unrestricted free agent.

Our next free agent review looks at cornerback Buster Skrine. 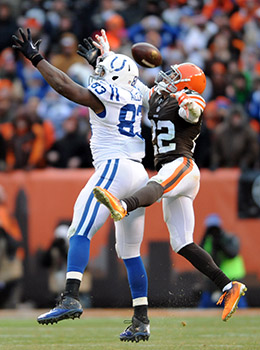 How and When He Joined the Browns: Skrine was a 5th round draft pick by the Cleveland Browns in 2011, and a testament to the fact that good players can emerge from the later rounds of the NFL Draft. Skrine was the Browns' No. 4 cornerback as a rookie, playing behind Joe Haden, Sheldon Brown, and Dimitri Patterson. He became a full-time starter in 2013.

Productivity Level Last Season: When the Browns drafted CB Justin Gilbert at No. 8 overall, it was thought that Skrine was going to have a competition on his hands to remain a starting cornerback. Skrine easily won the competition, though, and had perhaps the best season of his career.

Skrine finished the year with 67 tackles, 18 passes defended, and 4 interceptions. He was still flagged more than some cornerbacks in the league, but performed like an above average starter opposite Haden.

Why Keeping Him Could Make Sense: In his fourth year, Skrine continued to grow, and his versatility of being able to play the outside and the nickel position was imperative when Gilbert was a letdown and when K'Waun Williams was out with an injury. The secondary is the strength of the defense, so why risk breaking it up?

What the Browns Should Do: If the Browns were really confident in what Gilbert could bring to the table in his sophomore year, then it would be an easy decision to let Skrine walk and have Haden, Gilbert, and Williams as the team's top three cornerbacks. Skrine is a valuable player, but if you have three other talented cornerbacks, that money can be invested elsewhere.

The problem is that we have no idea what we have in Gilbert. It'd be nice to give him a shot, but you can't really do that if you give Skrine a sizable contract. Pro Football Focus only graded him as a -6.3 last year, but I think the market for him will be quite lucrative in free agency. One of the attractive qualities about Skrine is that he is younger than most of the other free agent cornerbacks. I don't trust Gilbert, but it's hard to set a contract value for Skrine that would make him want to stay here.  I'm going to guess a deal similar to what Alterraun Verner got with the Buccaneers last year, and that would hover at 4 years for $24 million or 5 years for $30 million. It would take some thought...but I think I'd have to do it.

Now it's your turn -- vote in the poll below on whether or not the team should try to re-sign Buster Skrine!