Reviewing whether it is worth it for the Cleveland Browns to retain safety Tashaun Gipson, who is a restricted free agent.

Our next free agent review looks at safety Tashaun Gipson. 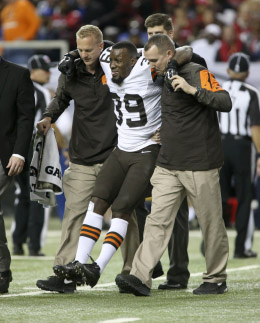 How and When He Joined the Browns: Gipson signed with the Cleveland Browns in 2012 was an undrafted free agent. He was a backup safety to T.J. Ward and Usama Young, but ended up starting three games as a rookie.

Productivity Level Last Season: Gipson had a pretty good year in 2013, but I still questioned whether he was the real deal or not. In 2014, Gipson came into his own, showing why he is one of the best ball hawks in the NFL. Gipson's season was cut short by a knee injury he suffered after a collision in Week 11 with CB Joe Haden as he was going for an interception.

Gipson finished the year with 52 tackles, 8 passes defended, 6 interceptions, and 1 touchdown return in 11 games. Despite his season being cut short, he was still named to the Pro Bowl.

Why Keeping Him Could Make Sense: At 25 years old, Gipson is the type of player you want to lock up long-term so that he and Haden can be the staples of the secondary for a long time to come. He reads quarterbacks very well and isn't a liability as a run defender.

There might be some concern that he's coming off of a knee injury, but he was close to being able to play in the Pro Bowl, so he should be fine for 2015. I think Gipson is the type of player who Cleveland would like to sign long-term now, so that they don't risk losing the rights to him in 2016. If they can't strike a deal by March 10th, though, the Browns should place the highest tender ($3.354 million) on him.

Now it's your turn -- vote in the poll below on whether or not the team should try to re-sign Tashaun Gipson!