Reviewing whether it is worth it for the Cleveland Browns to retain punter Spencer Lanning, who is an exclusive-rights free agent.

Our next free agent review looks at punter Spencer Lanning. 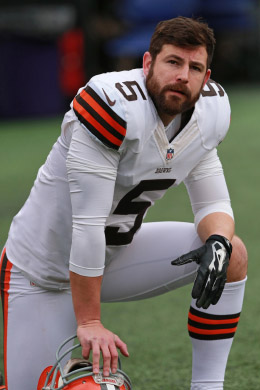 How and When He Joined the Browns: Lanning first joined the Cleveland Browns in 2012 as a free agent, but did not make the team over P Reggie Hodges. The Browns re-signed Lanning in 2013, where he won the punting job.

Productivity Level Last Season: Lanning made improvements in 2014, with his net average at 39.2 yards, up from 37.9 yards in 2013. He also did kickoffs at the end of the year when K Garrett Hartley replaced K Billy Cundiff, and he's also the holder on field goals.

Why Keeping Him Could Make Sense: Lanning got better in his second full year as a punter. The most impressive element to me for a punter is whether or not they have any flat out shanks. In 2013, I thought Lanning had a few of them. I don't recall any in 2014. Even if he's not the most powerful punter in the NFL, he's consistent.

What the Browns Should Do: The ERFA label applies to players who have less than three accrued seasons in the NFL (i.e. 6 games or more on the roster or IR). Under the ERFA rules, the Browns could offer these players a one-year tender worth $585,000, which is equivalent to the minimum salary for a player with two accrued seasons. If the Browns make an offer to an ERFA, no other team would be able to sign the player.

I think this is a no-brainer. The Browns have no desire to search for a new punter when there are more pressing issues at other positions. Lanning should receive the cheap, one-year tender.

Now it's your turn -- vote in the poll below on whether or not the team should try to re-sign Spencer Lanning!