The 2015 NFL Draft officially begins for the Cleveland Browns and the rest of the teams in the NFL at 8:00 PM ET. This is a continuation of the LIVE BLOG we've been running all day up until this point. Now that we are less than an hour away from things kicking off, it is fitting to start fresh with our live blog. You should also use the comments section as your NFL Draft open thread! (Newest updates will be at the top of the live blog below)

NOTE: Do not spoil picks before they are announced by Roger Goodell. If you do, you risk a temporary banning.

9:44 PM: At No. 14 overall, the Miami Dolphins selected WR DeVante Parker. Pffff. Why don't you guys just take all of the Browns' offensive weapons.

9:40 PM: Time for some quick catch up: at No. 13 overall, the New Orleans Saints, the other team with two first-round picks, took OT Andrus Peat. Still no first-round trades as the Browns are due up again at No. 19 overall.

9:39 PM: The Draw Play has been doing comics for each pick: 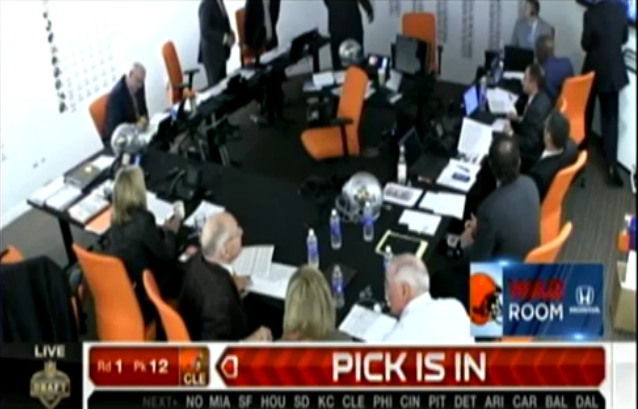 9:20 PM: At No. 11 overall, the Minnesota Vikings selected CB Trae Waynes. The Cleveland Browns are on the clock! I might gone dark for a few minutes, as I'll be quickly trying to whip together a separate post for Cleveland's selection. When I'm done, I'll post a link to it here.

9:15 PM: At No. 10 overall, the St. Louis Rams selected RB Todd Gurley! Whew, that means the Browns won't be taking him (sorry to those who wanted him!).

9:10 PM: The top players left on the Browns' DBN cumulative big board:

9:06 PM: At No. 9 overall, the New York Giants selected OT Ereck Flowers, which probably goes as a bit of a surprise.

9:01 PM: At No. 8 overall, the Atlanta Falcons selected DE/OLB Vic Beasley. The New York Giants are now on the clock.

8:57 PM: With two receivers off the board, will the Browns make a push to trade up like Phil Savage suggested a few days ago?

We'll see exactly HOW MUCH the Browns like Parker, because it looks like they'll have to move to get him

8:54 PM: At No. 7 overall, the Chicago Bears drafted WR Kevin White. I'm surprised that we still haven't seen any trades, as the Browns are now just five picks away! Could Cleveland make a push for DL Muhammad Wilkerson too?

Where for Wilkerson? Raiders or Cleveland is what I hear....now more teams may get involved.

8:47 PM: At No. 6 overall, the New York Jets took DE Leonard Williams. They were already deep on the defensive line, but they didn't care -- he's possibly the best defensive player in the draft, so they had to take him.

8:40 PM: At No. 5 overall, the Washington Redskins pulled off the first surprise, going with OL Brandon Scherff.

8:34 PM: At No. 4 overall, the Oakland Raiders selected WR Amari Cooper, bypassing on DL Leonard Williams. The Washington Redskins' pick is due in soon.

8:29 PM: At No. 3 overall, the Jacksonville Jaguars selected DE Dante Fowler. The Oakland Raiders have already been on the clock for 5+ minutes, so this first round might go a tad quicker than expected if no trades start going down.

8:22 PM: The Tennessee Titans stayed put at No. 2 overall, selecting QB Marcus Mariota. I wonder what Eagles head coach Chip Kelly and QB Sam Bradford are thinking right now. Could the Eagles still trade for Mariota before the night is done?

8:13 PM: No surprise at No. 1 overall as the Tampa Bay Buccaneers drafted QB Jameis Winston. Now the real fun begins with the Tennessee Titans on the clock.

8:05 PM: The Buccaneers just went on the clock.

7:46 PM: Almost all of today's pre-draft discussion on Twitter has centered on No. 2 overall. You know there are 31 other first-round picks, right?

Everything I've heard is that Philly's offer to Tennessee is very substantial. Still seems like the sweet spot to me

As for the Browns, they are obviously willing to part with picks 18 and 19 for 2nd overall, but have balked at adding pick 43 to the mix...

7:42 PM: Even though the draft is close to starting, this seems like the calm before the storm. Get ready, though, because things are going to get crazy once it gets started.

Chris Mortensen just said on ESPN that you can't rule out a trade by the Eagles to No. 1. #soundsfamiliar

7:32 PM: The Bears' push to trade up with the Titans sounds like it began with, "Can you take QB Jay Cutler?" and ended with a resounding, "No."

ESPN's @BobHoltzmanESPN reports Bears have spoken with Titans about No. 2 overall pick, but Tenn not interested in Jay Cutler.

7:30 PM: A half hour before the draft, let's show some faith in Browns GM Ray Farmer. Yes, he and the organization took credit for the failures of CB Justin Gilbert and QB Johnny Manziel in the first round last year. However, let's not forget that after the conclusion of last year's first round, Farmer was universally praised for how he was able to gauge the value and maneuver around in round one to get the guys they did, which included fleecing the Bills for a first round pick in 2015, and letting Manziel fall as much as he did without trading up sooner. Let's see if Farmer can do the same this year, with the hope that the actual players selected turn out better.

7:20 PM: Are the Chicago Bears creeping into the Marcus Mariota sweepstakes late? Also, why is nobody still discussing the possibility of the Titans staying at No. 2, passing on Mariota, and then trade talks shifting to the Jaguars?

About an hour before #Titans go on clock, #Eagles and #Bears are two teams pushing hardest for No. 2 in a trade.

7:15 PM: The overall feeling is that this year's draft class isn't as deep as last year's class, so teams might be more interested in trading up into the fix round. Therefore, the Browns could actually trade down from No. 19, as Daryl Ruiter of 92.3 the Fan suggests:

7:08 PM: Another report, this time from the Washington Post, that believes the Browns will have a new quarterback by the end of the day:

Source says Browns are hopeful they'll land a QB tonight, whether it's trade-up for Marcus Mariota or Sam Bradford in deal with Eagles.

7:01 PM: When I did my mock draft projection, I pegged the Browns to get NT Danny Shelton and TE Maxx Williams at No. 12 and No. 19, respectively. The odds of Williams actually going at No. 19 overall is unlikely. When we're considering the Browns' first three draft picks, though, I'd love any subset of these players: Shelton, Williams, WR DeVante Parker, NT Jordan Phillips, DE/OLB Shane Ray, OL Cameron Erving.

An interesting scenario would be if Cleveland goes Parker (No. 12), Erving (No. 19), and then Phillips (No. 43). Why throw Erving into the mix? You can plug him in as a viable offensive tackle this year, but with what he showed at center, the Browns have a great fallback plan for when C Alex Mack likely opts in 2016.

7:00 PM: You can quickly catch up on all of today's live blog from before 7 PM right here. The Cleveland Browns have the No. 12 and No. 19 overall picks as things stand right now. Teams have ten minutes to make their first-round selections.

If the Browns stay put, the latest they would begin to be on the clock would be from 9:40 PM - 9:50 PM. However, if teams pick quicker, and someone probably will, it could end up being a little earlier that we're on the clock. To be safe, I'd definitely make sure you're tuned in by 9:20 PM. Don't chance it -- make sure you're watching TV, listening to a radio, or following DBN for all of the latest!