Sunday, the NFL season officially comes to a close when the Denver Broncos take on the Carolina Panthers in Super Bowl 50. Kickoff time is scheduled for around 6:35 PM ET. Here is my official prediction for the game: 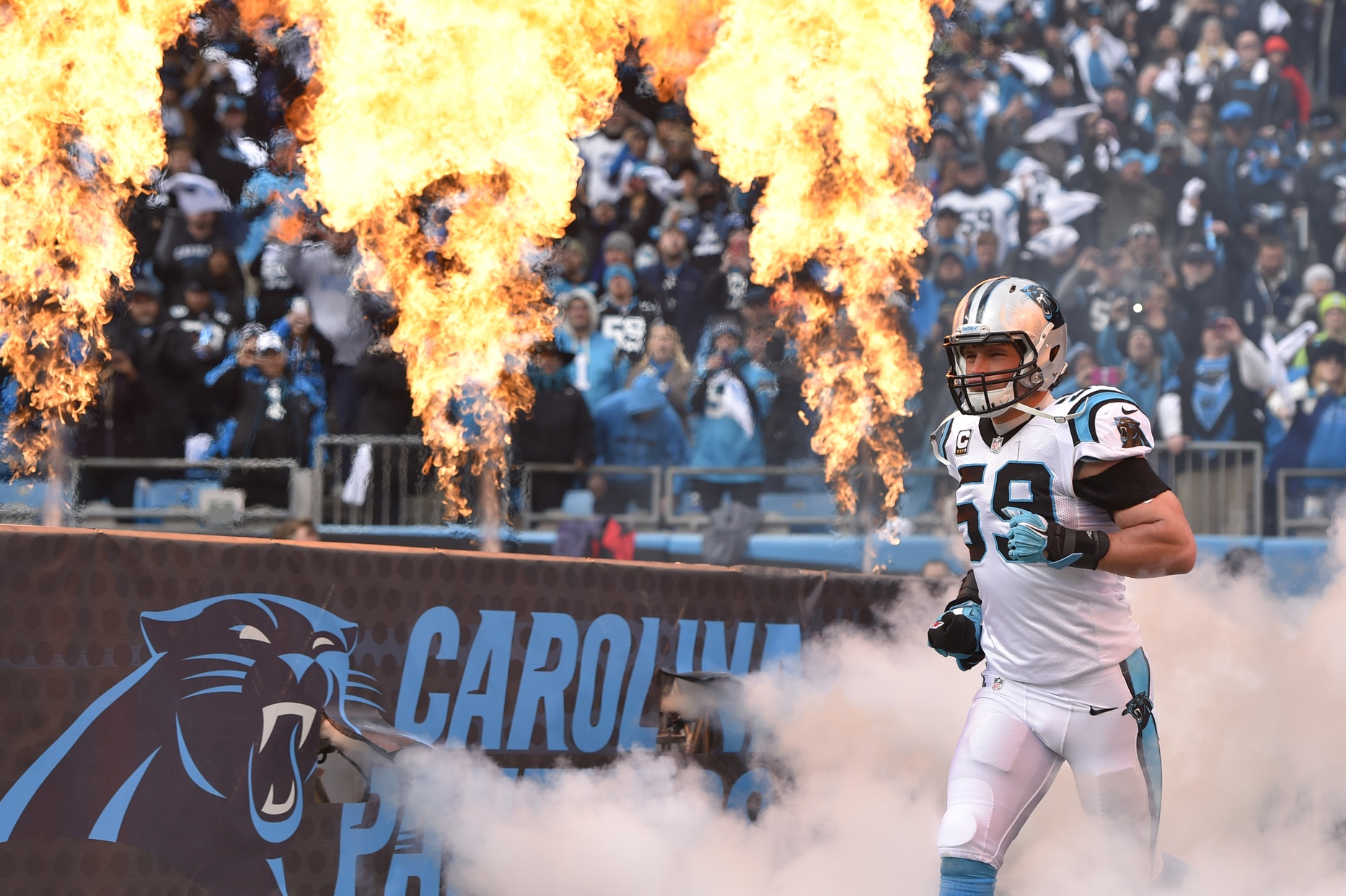 Luke Kuechly is among the top defensive stars that will be featured in this week's Super Bowl. Credit: Bob Donnan-USA TODAY Sports

Broncos Defense: The Broncos' defense was excellent during the regular season. When John Elway dismissed John Fox after last season, it was because he wanted the team to display a new level of toughness, despite being ranked No. 3 in the NFL in 2014. Well, during the regular season of the 2015 season, they were the 1st-ranked defense in the NFL, including 3rd against the run and 1st against the pass. They also registered the most sacks per pass attempt in the NFL.

Von Miller (11 sacks, 32 QB hits) and DeMarcus Ware (7.5 sacks, 16 QB hits) bring the most pressure at outside linebacker, but Derek Wolfe and Shaquil Barrett can also bring the pain. They tortured Tom Brady in the AFC Championship game two weeks ago, but Cam Newton features some more mobility and has been single-handedly propelling the Panthers' offense.

Despite the fact that Newton has a rocket arm, the Panthers' offense is predominantly built on being able to run the football. As noted earlier, Denver is one of the league's top-ranked run defenses. People might think of Miller as just a top-notch pass rusher, but he's also very good against the run, as is Wolfe. Having two complete players on the defensive line and at linebacker is a great luxury for an NFL team. Inside linebacker Brandon Marshall is also stout against the run. The Panthers operate from such a different scheme though on the ground, though, that there's no telling how successful their well-tested run defense will pan out under the bright lights.

The Broncos don't have a weakness in the secondary either, which is why they've been able to get so far despite a shaky offense. Both of Denver's cornerbacks, Chris Harris and Aqib Talib, excel in man coverage, forcing opposing quarterbacks to hold on to the ball as they wait for receivers to get open. Often times, the pass rush gets to the quarterback before the receivers can find that seam, which is what Brady and the Patriots experienced last week. T.J. Ward and Darian Stewart also make for a good tandem at safety.

The Panthers' only loss this season came against the Falcons in Week 16. Pro Football Focus notes that Newton faced the most pressure he had all season in that game on 47.1% of his snaps. Expect Denver to trust their man coverage and bring the heat on Newton, just like they did to Brady.

Panthers Defense: The Panthers were also one of the best defenses in the NFL this year. They ranked 6th in the NFL during the regular season -- 4th against the run and 11th against the pass. What has been devastating about their defense though is what they've done in the postseason early in games against the likes of the Seattle Seahawks and Arizona Cardinals. They have set the tone early on for two straight games, and if that happens again in the Super Bowl, they know their opponent doesn't possess the firepower to rally.

The Panthers feature one of the best defensive lines in the NFL, led by Charles Johnson, Star Lotulelei, Kawann Short, and Jared Allen. Short is an up-and-coming star who can dominate against the run and the pass. This year,, he led Carolina with 11 sacks. Pro Football Focus calls Luke Kuechly the best inside linebacker in the NFL. He's not going to rush the passer, but he is 3rd at defending the run and 1st in pass coverage. His pass-coverage abilities have been on display this postseason, as he has a pick six against both the Seahawks and the Cardinals. Peyton Manning has not had the same type of arm in 2015 -- heck, Browns fans saw that when Karlos Dansby logged a pick six against him and Barkevious Mingo had an overtime interception that should have won it. Kuechly will take advantage of any ducks that Manning throws out there.

Carolina's secondary is not as good as Denver's secondary, but it's still a very respectable group, led by Josh Norman. While the Broncos rely more on man coverage, Carolina's defense is built more on deploying a wide range of coverage schemes to keep opponents off guard. The Panthers lost their complement to Norman, veteran Charles Tillman, a few weeks ago. Although it hasn't cost them a playoff game, it takes a positive element out of Carolina's defense that now has them questioning how they will cover both Demaryius Thomas and Emmanuel Sanders if both receivers step their games up. 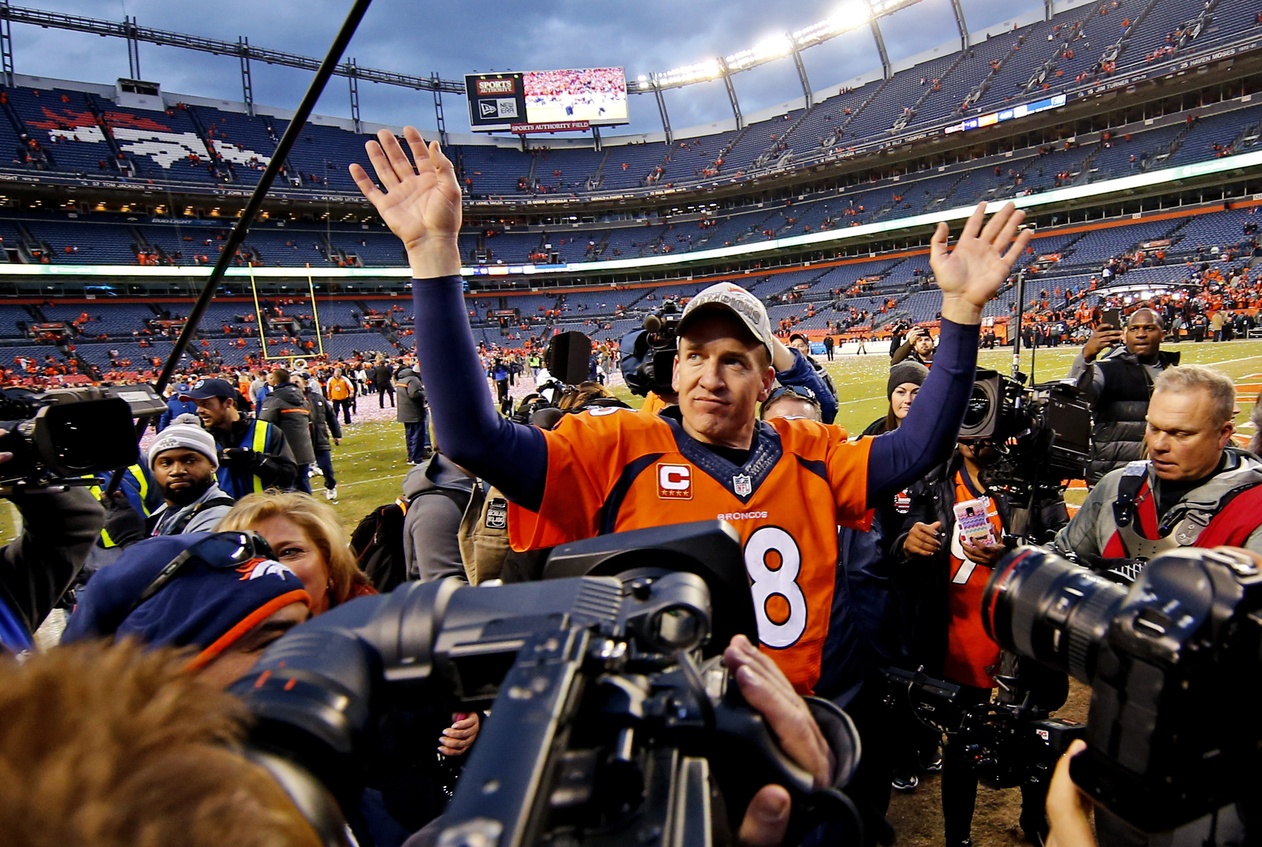 Broncos Offense: The Broncos don't have a high-powered championship-like offense, as they average just 22.2 points per game, and quarterback Peyton Manning understands that, saying a couple of weeks ago, "Our defense is guiding us, let's make that clear."

It's a sharp contrast for the rest of Manning's career in which he has led some of the all-time great offenses, both in Indianapolis and Denver. In 2013, Manning had 55 touchdowns to 10 interceptions. Just last season, he had 39 touchdowns to 15 interceptions. This year, he had 9 touchdowns and 17 interceptions in 10 games and was sent to the bench (to recover from a foot injury) the second half of the season. It seemed like Brock Osweiller's time had finally begun, but then...Manning came back in Week 17 to help secure the No. 1 seed in the AFC for Denver.

Since Manning's return, he still hasn't been "lighting it up," but he has cut down on the turnovers and is making a lot more respectable throws. His top two receivers, Demaryius Thomas and Emmanuel Sanders, have had up-and-down seasons (though most teams would take either one of their production any day of the week). Part of that has been due to Manning's struggles with the deep ball, but Denver has also had an inordinate amount of drops at the receiver position. If Manning can find the accuracy on his deep ball, Denver's offense can reclaim its glory days, even if its just for one week. However, Manning's strong suit has been on intermediate throws, which he'll probably try to stick to.

Ronnie Hillman and C.J. Anderson are Denver's top two rushers. Hillman finished the regular season with 207 carries for 863 yards (4.2 YPC) and 7 touchdowns. Anderson was at 152 carries for 720 yards (4.7 YPC) and 5 touchdowns. Neither receiver has been particularly involved as a receiver. Much of Denver's success on the ground can still be attributed to Manning reading the defense and calling out the right play/adjustment, but veteran left guard Evan Mathis has also been a standout in run blocking. Even though Owen Daniels caught a pair of touchdowns in the AFC Championship game, the position has not been a threat in the receiving game. Of particular disappointment is Vernon Davis, who has been open for a couple of big plays but has just flat out dropped the ball. Former Browns receiver Jordan Norwood could get some work in the slot for Manning.

Panthers Offense: Quarterback Cam Newton had the best season of his career in 2015, and should be named the league's MVP tonight. He came into the season having lost his "top" receiver, Kelvin Benjamin. Despite that, he elevated all of the talent around him, throwing for 35 touchdowns to just 10 interceptions and also rushing for for 636 yards and 10 touchdowns. He's been dynamic in the postseason too, tossing 3 touchdowns and rushing for 2 more against two top-level defenses from the NFC West. The guy simply cannot be fazed, and although his celebratory antics irk some, I think he's won over more fans because of it.

The Panthers' running game ranked 2nd in the NFL this season. Newton's production helped, but Jonathan Stewart also proved he could handle a load as the team's featured running back, finishing the season with 242 carries for 989 yards and 6 touchdowns. Stewart wasn't involved as a receiver very much, though, with only 16 catches for 99 yards on the year.

Newton deceives defenses with whether he's going to hand the ball off, or keep it himself for a run or pass. In the passing game, that can buy him some time to throw the ball, and he's able to "cheat" compared to other quarterbacks because his arm is so strong that he's able to zip long-range passes on-target at the last millisecond. His top receiver is tight end Greg Olsen, who caught 77 passes for 1,104 yards and 7 touchdowns. The surprise of the group was Ted Ginn Jr, who caught 10 touchdown passes and proved to be a deep-threat receiver. The much-ridiculed receiving group also got about 450-yard, 4-touchdown type of seasons from Jerricho Cotchery, Devin Funchess, and Corey Brown.

Those of you who have read my work over the years know that I'm a big fan of Peyton Manning. I have nothing against Cam Newton, and I love how the Carolina Panthers are built too. Part of me wishes that any other team except a Manning-led team was facing the Panthers, because they've earned the right to be the Super Bowl Champions this year. There some former Browns players, coaches, or front office people on both teams, which you can review here.

Carolina is the hot team to pick, being favored by 5.5 points, because they've jumped out to quick starts in the postseason. The Broncos' defense has been playing lights out too, though, and that overlooked fact will keep it an even-paced game early. I see this being one of the lower-scoring games for a Super Bowl in a game dominated by defense and field goals, but then in the final moments of the game, Manning will go out on top as he leads a game-winning drive in heroic fashion.

Additionally, I'll take Manning to be the MVP for the circumstances, the post-game poured drink to be orange, and for the pre-game National Anthem to last 2:31. Be sure to submit your own picks in our DBN Pick'em.