NFL Free Agency: 5 Players the Cleveland Browns Should Sign in 2016

We are just a few away from the start of free agency, and the Cleveland Browns are stacked with just over $50 million in cap space. The Browns also have a couple of high-profile picks that they will be able to add some talent from in April, but the right moves in free agency can fill some key roles with proven players.

This year's free agency list will be much more difficult to project. Usually, when I compile my list, I already know the status of the Browns' own free agents, so I have the freedom to explore very specific positions. I'd like to think the Browns have a semi-decent chance of re-signing WR Travis Benjamin and then either C Alex Mack or RT Mitchell Schwartz, but if those players aren't retained, at best, the team will only seek to find mid-level replacements. In other words, I don't anticipate there being an equivalent swap, like "signing Donte Whitner instead of keeping T.J. Ward" or "signing Tramon Williams instead of keeping Buster Skrine."

With all of that in mind, here is my annual list of five players I would consider signing if I were running the Browns. 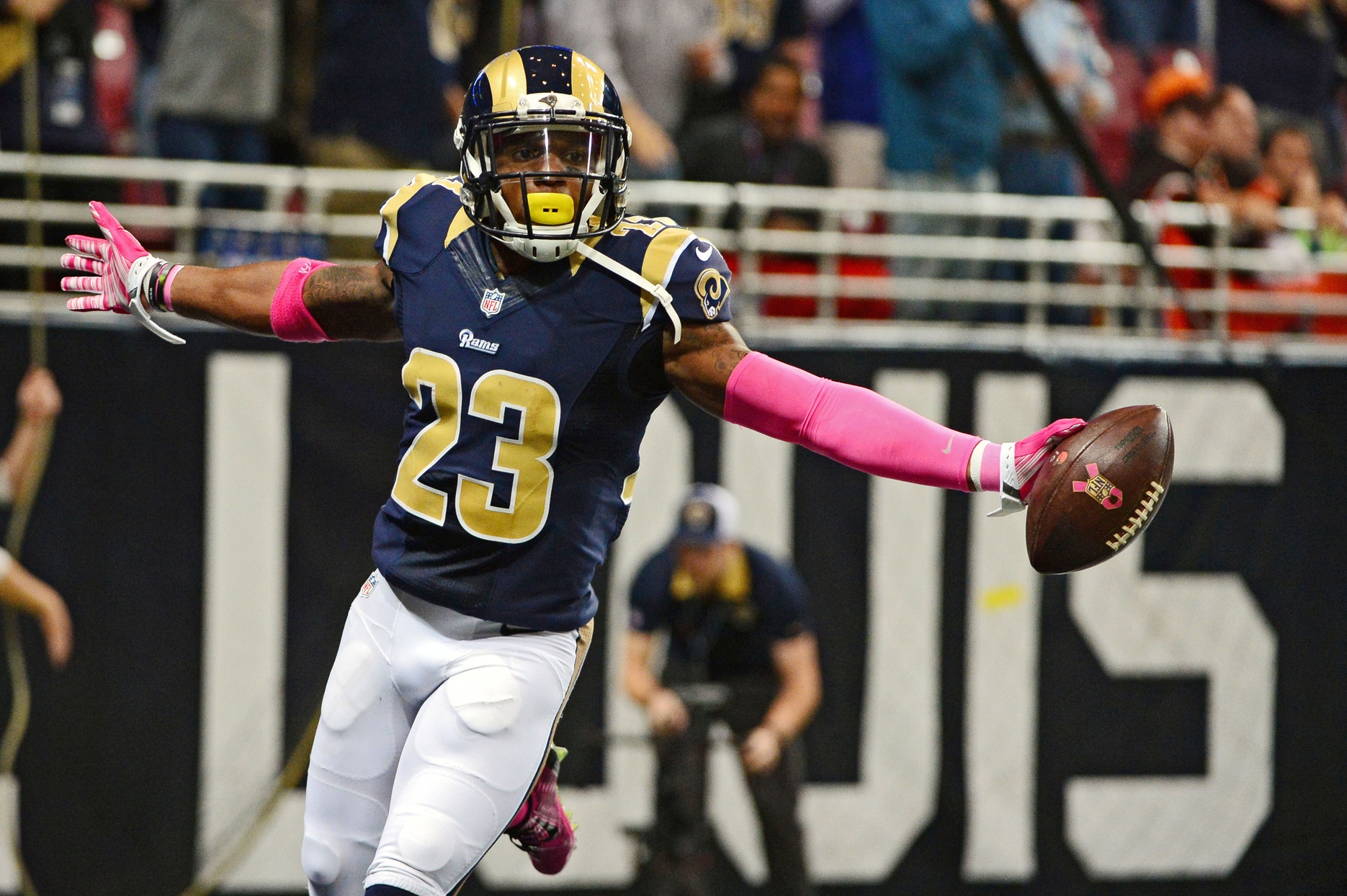 FS Rodney McLeod returned a fumble for a touchdown against the Browns in 2015. Credit: Jeff Curry-USA TODAY Sports

1. FS Rodney McLeod, St. Louis Rams - While Tashaun Gipson is busy looking to be the top-paid safety in football, the Browns have an opportunity to replace him with another young free safety for half the price. The first knock you'll see on McLeod is that he's undersized at 5-10, 186 lbs, but performance triumphs everything. Unlike Gipson, McLeod showed a lot of growth in 2015 and finished the season as Pro Football Focus' 10th-ranked safety.

McLeod was undrafted in 2012 but has shown his durability by starting all 16 games in each of the past three seasons for the Rams. During that three-year stretch, he's logged 5 interceptions and forced 7 fumbles. The interceptions aren't as impressive at what Gipson can deliver, but the overall turnover rate and his coverage ability make him a solid, young option.

One question might be whether McLeod would still thrive on a different team. With the Rams, he was part of a very physical defense (he can lay the wood himself), so there's always that perception that the players around him help allow him to play at a higher level. I'd be willing to take that chance, because as bad as the Browns' secondary was a year ago, I have faith that CB Joe Haden will rebound and help restore the secondary to a level of respectability. My projected offer would be a 4-year deal worth $25 million and $10 million guaranteed.

Alternate: I'm intrigued by Tyvon Branch, but he plays strong safety, not free safety. The rest of the free agents don't interests me much. I have floated the idea in my head of Tramon Williams moving over to free safety and the team signing another cornerback, but that's too complicated of a scenario to project at this point in time. 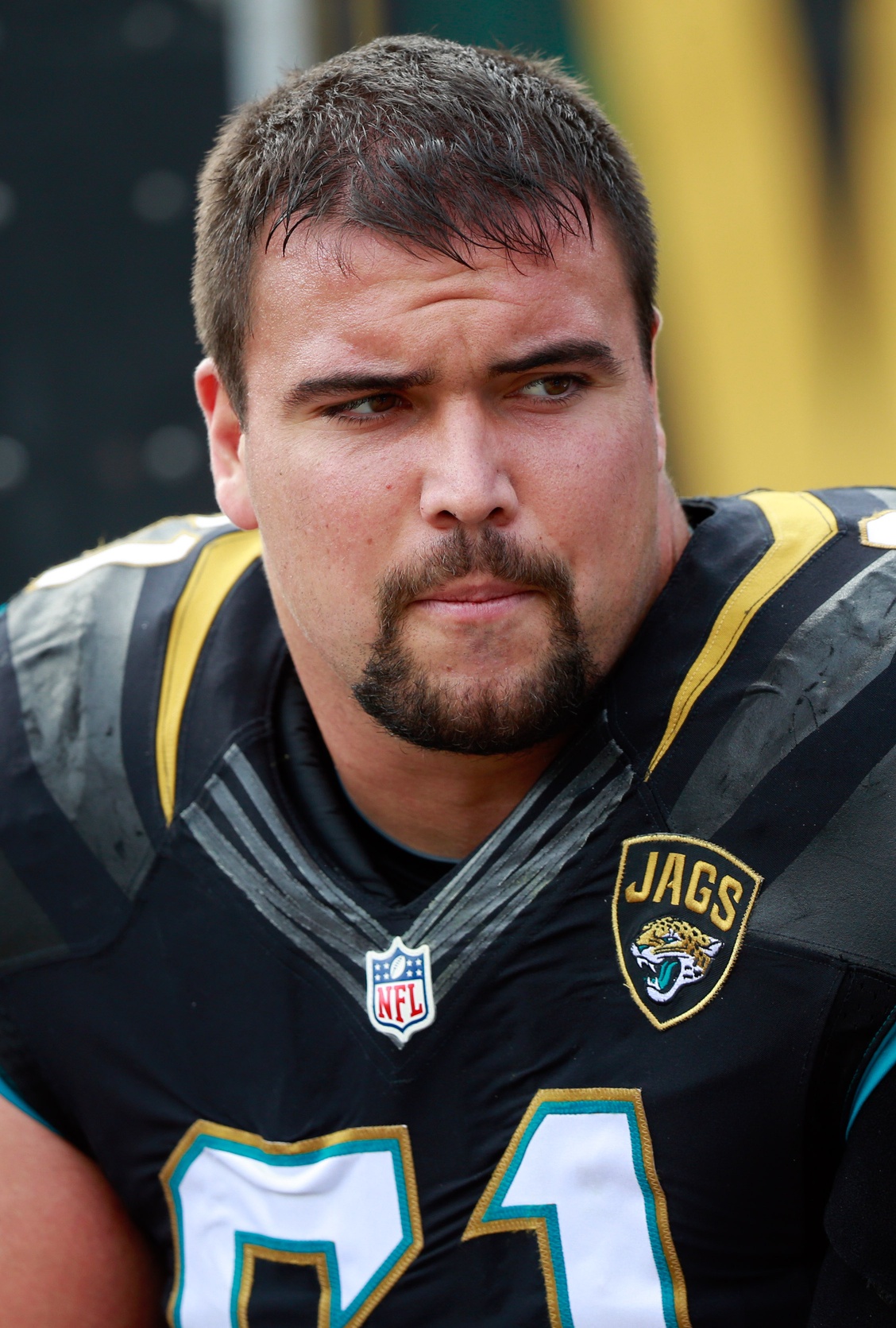 2. C Stefen Wisniewski, Jacksonville Jaguars or OT Joe Barksdale, San Diego Chargers - This is the first time I've ever done an "either/or" free agency selection, and it comes out of necessity. I've resigned myself to the fact that we're not going to get both Mack and Schwartz back, the there's even a chance that neither of them returns for 2016. As wonderful as it would be if Cameron Erving could fill a void as a first-round pick last year, his performance was as a rookie was very poor.

Wisniewski and Barksdale are still young at 27 years of age, and are the type of more "low-key, analytical type signings" that a site like Pro Football Focus recognizes for their output. Hue Jackson was also the Raiders' head coach when Oakland drafted Wisniewski (2nd round) and Barksdale (3rd round) in 2011.

Pass protection is his strength, and he’s graded positively in four of his five seasons as a pro. Wisniewski is not an elite center, but he is one of just 13 centers who had an above-average overall grade in 2015 out of 40 qualifying players. Wisniewski has also been extremely reliable throughout his career, missing just 19 snaps over five years.

Barksdale didn't start any games for Jackson in 2011; he's matured into a started over the past three years, having spent 2015 as a member of the San Diego Chargers. PFF cites him as being a slightly above average pass blocker and a slightly below average run blocker. To an extent, he's a poor man's Mitchell Schwartz. The Browns aren't poor in riches, but in terms of market value, it seems that Schwartz will continue to seek top dollar while Barksdale is coming off of a one-year deal.

Alternate: If the Browns don't get Wisniewski at center, then sadly, they should consider John Greco or Cameron Erving. If they are thinking about Greco at center, they might just shift Austin Pasztor (if retained) to guard again. Andre Smith would be an option at right tackle, but he was so bad in 2015 that I almost cringe at the thought.

3. WR Mohamed Sanu, Cincinnati Bengals - The Browns are in a tough position again at wide receiver, especially with Benjamin's status uncertain. Josh Gordon could be a No. 1 receiver for at least the next two years, but he hasn't been re-instated yet and the team can never have blind faith that he'll remain clean. Marvin Jones is considered the top free agent receiver on the market and has the obvious ties to Hue Jackson, but I think he is a very good No. 2 receiver who is going to get paid as a No. 1 receiver. 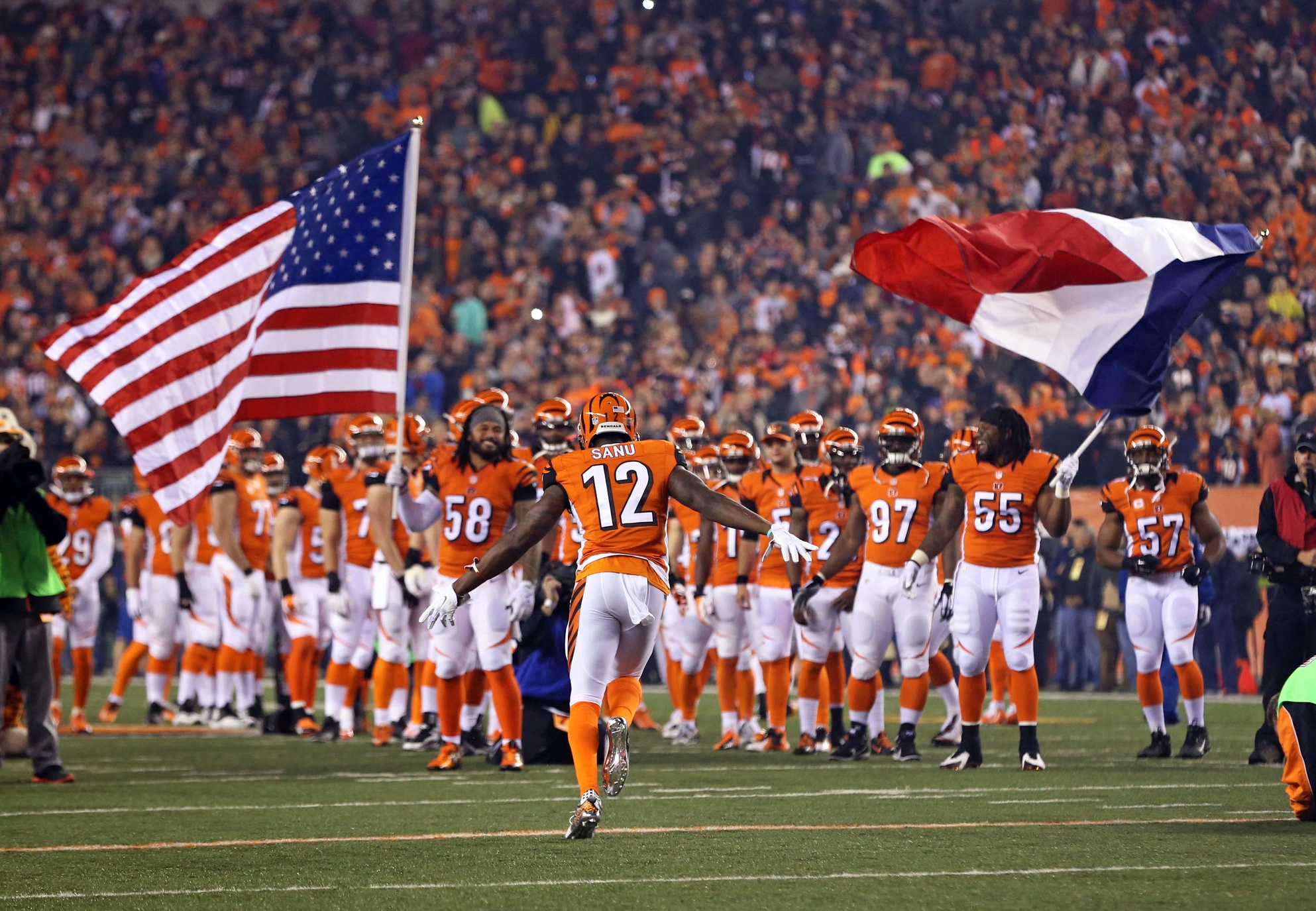 Even if he's not a starter, Mohamed Sanu would have a niche role in the Browns' offense. Credit: Aaron Doster-USA TODAY Sports

That is where Sanu comes in. In 2014, Sanu caught 56 passes for 790 yards and 5 touchdowns. He has also had a tendency to drop a lot of passes, though. This past season, Sanu saw a reduced role, catching 33 passes for 394 yards and 0 touchdowns. The good thing about Sanu's reduced role is that he should come at a cheaper rate now. The bad thing is that I don't really feel like I "covet" Sanu as an everydown receiver. I put him on this list because he should be an affordable option who is familiar with Jackson's system and can be dynamic from a trick play-end around perspective. My projected offer would be a 3-year deal worth $13 million and $5 million guaranteed.

Alternate: Rishard Matthews had a mini-breakout year for Miami in 2015, and I'd still be somewhat interested in Andre Holmes, who I mentioned in last year's column. The free agent market at receiver just isn't very lucrative this year, though. 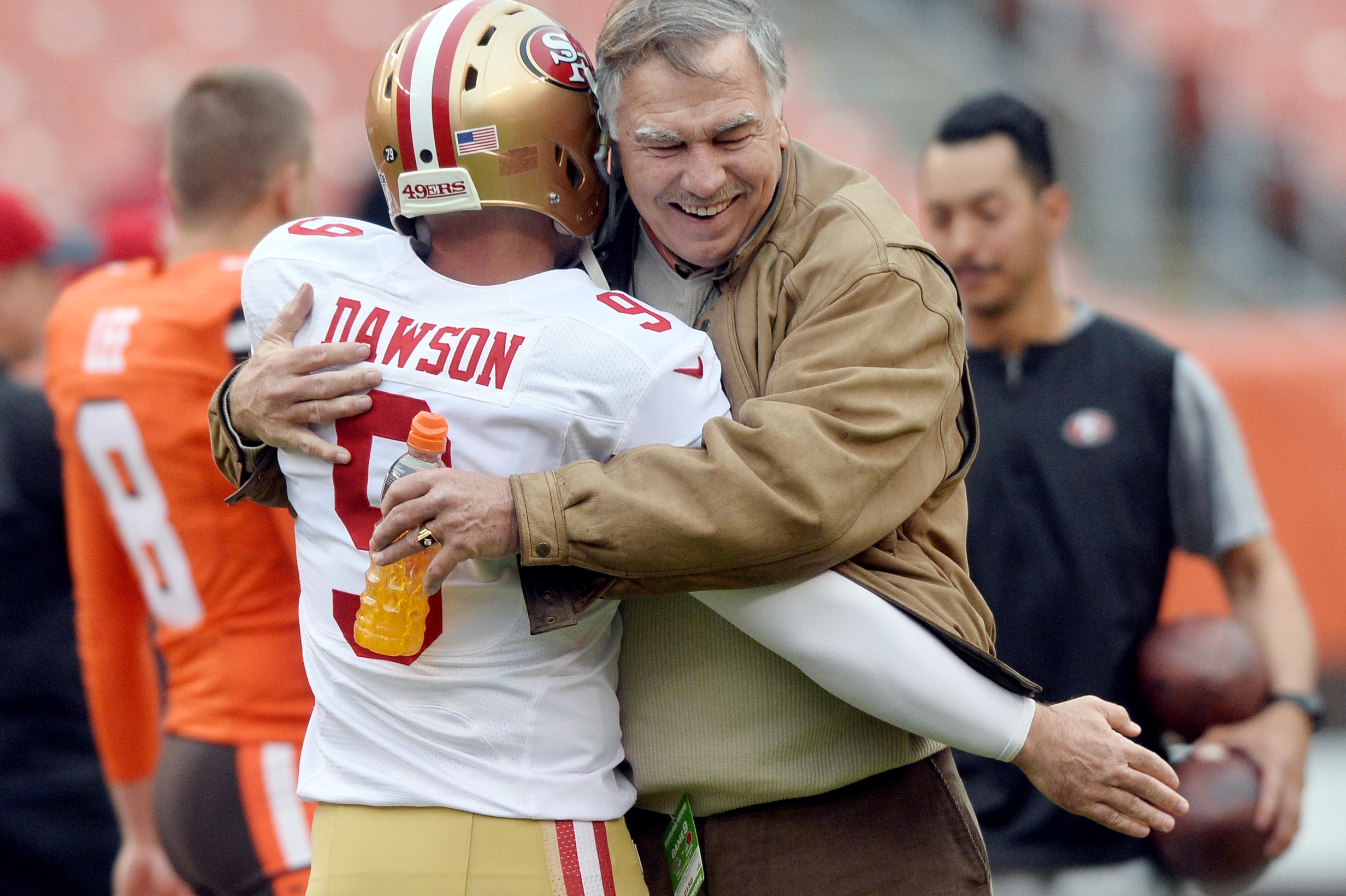 4. K Phil Dawson, San Francisco 49ers - This would be the ultimate feel-good signing, wouldn't it? Even though he's 41 years old, the former Browns legend doesn't seem ready to retire. Last year, he was 24-of-27 on field goal attempts (88.9%). He was basically taken off of kickoff duty, but I think he can still do kickoffs effectively enough, given the kickoff rules. He was also 3-of-3 on kicks from beyond 50 yards last year.

The objection to this would be, "why would the Browns replace a 24-year old (Travis Coons) who made 87.5% of his kicks in his first year for a 41-year old?" It'd be a very tough decision to make, but I'm sure somewhere deep in some analytical studies is the notion that the ability to make long field goals are important at this position. The Browns' line had difficulty blocking on long-distance kicks last year, but part of it was also on Coons' low trajectory, and I don't have a lot of faith that he can consistently improve upon that in year two. My projection would be a 2-year deal worth $6 million and $3 million guaranteed.

Alternate: There are no other kickers -- it's either Dawson or Coons. This might be chalked up to the "homer" free agency pick inside me. 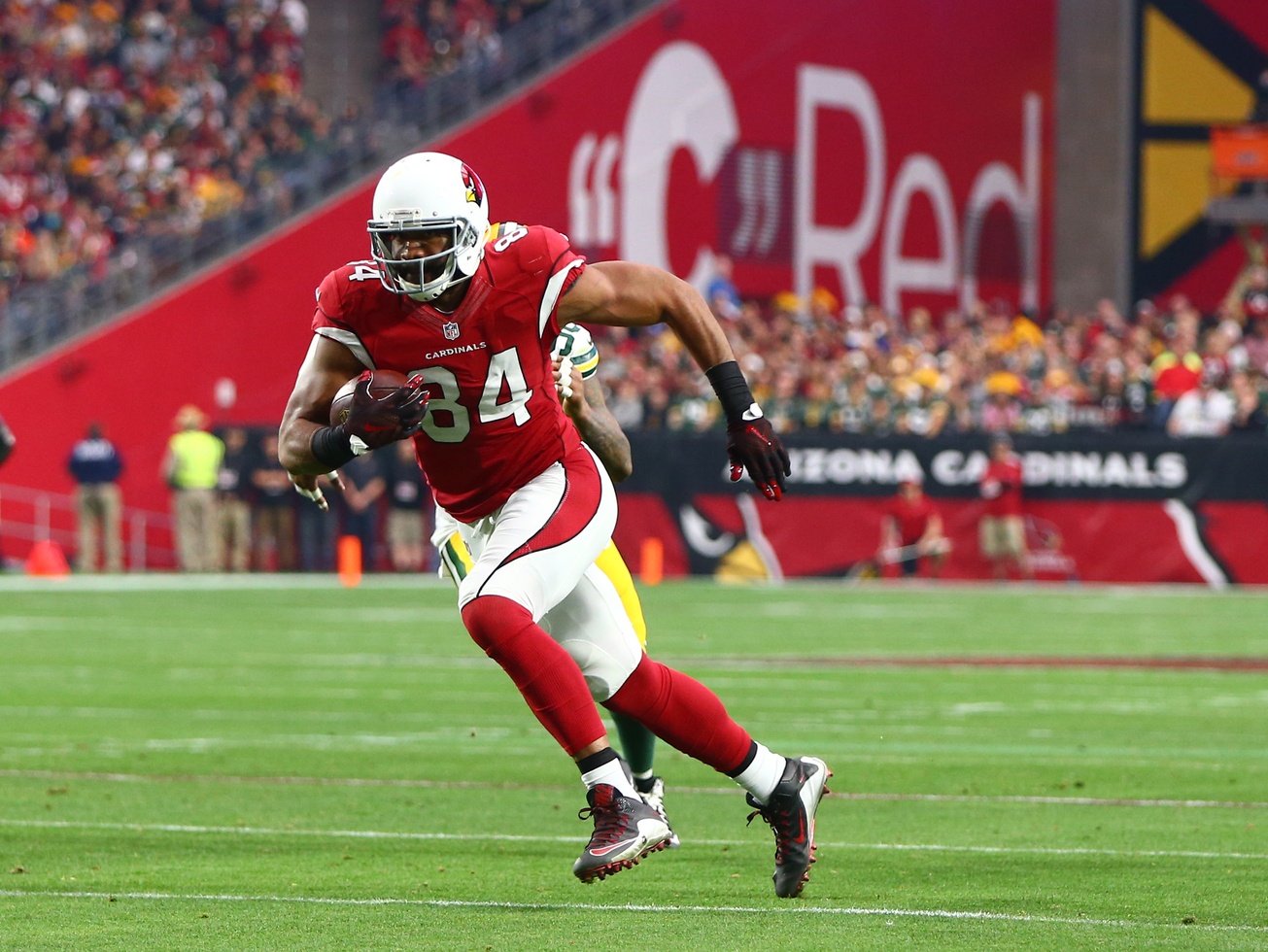 Will this be the season I finally see the Browns pick up a blocking tight end in free agency? Credit: Mark J. Rebilas-USA TODAY Sports

5. TE Jermaine Gresham, Arizona Cardinals - Time and time again last season, one of the big reasons the Browns were suffering so many negative plays in the running game was because of how ineffective the blocking was at the fullback and tight end positions. Even though TE Gary Barnidge got better as the season went along, make no mistake about it: Barnidge thrived as a receiving tight end, not a blocker.

If Barnidge was to be the team's receiving tight end, then TE Jim Dray was meant to be more of the blocking tight end, and he was cut a couple of weeks ago. I can't imagine new head coach Hue Jackson watching the film on FB Malcolm Johnson and thinking, "let's get this guy some more touches!" either.

Gresham was a first-round draft pick by the Bengals in 2010, where he spent the first five seasons of his career, including one in which Hue Jackson was the team's offensive coordinator. Last year, Gresham played out a 1-year, $3.125 million deal with the Arizona Cardinals. Gresham was a starter for Arizona, but posted career lows in receptions (18), yards (223), and touchdowns (1). Much of that is due to the fact that Bruce Arians doesn't use his tight ends as receivers very much, which means Gresham is not going to get a big payday this offseason. Gresham is a solid run blocker, though, and would be a nice complimentary piece to Barnidge in Cleveland. The familiarity is there, but the main question is whether Gresham is willing to see non-starter reps for the first time in his career? If so, I'd bring Gresham in on a 2-year, $5 million deal with $2 million guaranteed, and I'd also throw in a couple of incentives.

Alternate: Marcedes Lewis has spent his whole career with the Jaguars, but they picked up Julius Thomas last year as their main receiving threat. Lewis can still be a good blocker, but at 31 years of age, other teams aren't going to throw big-time money at him. Scott Chandler also falls along the lines of a good, veteran blocking tight end.

The Browns should have a little over $50 million in cap space when free agency begins. Unlike other years, my top five coveted moves would not change the foundation of this team drastically. Rather, they go the route of having above average players who can command mid-level contracts as opposed to being the highest-paid players in the NFL at their position.

What do you think, Browns fans? Let us know in the comments section which free agents you covet this year.