How can the Browns’ defense corral Lamar Jackson? These experts debate: Part 2

Share All sharing options for: How can the Browns’ defense corral Lamar Jackson? These experts debate: Part 2

The Cleveland Browns want to make the post-season two years in a row. Obviously. There are issues with this year’s squad, though. They haven’t played on any consistent basis for most of the season.

Against the Cincinnati Bengals, that proved to be the most complete game of the year so far. Cleveland appeared to be a can’t miss prospect for the playoffs (which will come sooner than later). However, they were trounced by the Arizona Cardinals and New England Patriots. They played listless against the league’s worst club the Detroit Lions.

To win the division, you have to at least split with Baltimore which they play in back-to-back games with their bye week sandwiched in between.

And not just beat Baltimore, but beat Lamar. That is easier said than done as the Browns have discovered countless times.

But how? How do you neutralize Lamar? What will be DC Joe Woods’ strategy?

RELATED: HOW CAN THE BROWNS’ DEFENSE CORRAL LAMAR JACKSON? PART 1

DBN’s writers along with some trusted Browns sources have come together to give their take on what it will take to neutralize Lamar.

In Part 1, DBN staff writer Matt Wood stated the Browns must punish him, control the pass rush and do not under any circumstances blitz Lamar.

Angeline Adams of the Facebook fanpage “Cleveland Browns We Bark Together”, her analysis was to key on Myles Garrett to contain the gifted quarterback. She said Myles and Company must play very aggressive and physical ball.

“The Dawgs Podcast” chimed in with a need for the Browns’ defense to keep Lamar in the pocket and make him throw. And use a spy - maybe use two spies.

DBN staff writer Barry Shuck concurred with those thoughts that the spy strategy was critical to keeping Lamar isolated to his side of the ball instead of busting out and claiming real estate. However, his analysis did state that this method was basically playing 10 players against 11 on every down.

For this second of two parts, four Browns’ analysts take on the question: How can the Browns’ defense corral Lamar Jackson?

Lamar Jackson can clearly be stopped — just look at his performance in the playoffs — but he has still been a tough puzzle for the Browns to crack as they are currently riding a four-game losing streak to the Ravens.

The Browns came close in the last game as they picked off four of Jackson’s passes and sacked him twice, but the offense could not do its part as Cleveland lost. The defense also limited Baltimore’s run game, to an extent, as they held the Ravens to an average of 3.4 yards per carry, making them work for all of their 148 rushing yards.

Cleveland likely can’t count on four interceptions — although Jackson has thrown eight in his last four games — but if they can continue to pressure Jackson he will likely make mistakes. And perhaps this time the offense can convert those mistakes into actual points

One area the Browns must tighten up is the communication issues that have plagued the secondary throughout the season. That was on display against Baltimore as Jackson was able to hit a big play to tight end Mark Andrews and then hit a wide-open Andrews for a touchdown, both times victimizing Cleveland’s secondary.

Defensive coordinator Joe Woods came up with a solid game plan for Jackson the first time around, and it would be tempting for him to just roll out the same defense, especially since everyone knows what the Ravens want to do on offense. In their last meeting, Cleveland blitzed Jackson right around their normal rate of 20 percent; perhaps this is the week to unleash a more aggressive plan of attack to mix things up.

Of course, in that game Jackson burned the Browns when he was pressured — completing eight-of-10 passes for 94 yards and a touchdown against 12-of-22 for 71 yards when throwing from a clean pocket. So perhaps the Browns can continue to bring pressure with just four rushers and hope the secondary can hold up this time and limit the big plays.

So, control the run, keep a tight lid on Andrews, limit as best they can the big plays from Jackson (hello linebacker Jeremiah Owusu-Koramoah) and him at every opportunity. (Just no more stupid roughing the passer calls from defensive tackle Malik McDowell, please.) And finding a way to run the ball even with Baltimore stacking the box would be nice to limit the number of opportunities that Jackson has to make something happen.

President: Browns Backers with a Twist

In order to snap the losing streak versus the Baltimore Ravens, the Cleveland Browns will have to find a way to contain Lamar Jackson.

The Browns’ aggressive defensive ends, Myles Garrett and Jadeveon Clowney, will have to play smart. They’re aggressiveness can lead to them over-pursuing the quarterback, creating running and throwing lanes. They should not find themselves behind Jackson. If Jackson has the ability to step up in the pocket and have his first would-be tackler be a linebacker or safety then it is already too late. The defensive ends will also have to be disciplined to not bite on play action and options to keep Jackson contained.

In addition to the defensive ends, it is important for the interior defensive lineman to plug up gaps. They will get blocked away from the center in order to create an opportunity for Jackson to step up. Typically, a defense lineman wants to get to the quarterback as fast as possible, any way possible, but versus Jackson staying in their lanes as long as possible may be able to make him hesitate enough before scrambling.

The linebackers may have a quiet day against Jackson and the Ravens as their usage may be minimal. Jeremiah Owusu-Koramoah (JOK) will be instrumental in sniffing out a Jackson scramble. The other linebackers on the Browns are not fast enough to keep up with Jackson. JOK should also be called on upon to blitz from multiple angles and disguises in order to make Jackson always have to think of where he is on the field.

The secondary is instrumental into stopping Jackson. While the perception is that Jackson does not have a good throwing arm, the reality is that he does not need one. His running ability makes him throw to open receivers as the secondary has to cover their man a few seconds longer than normal or break off in case of a Jackson scramble. The Browns’ cornerbacks are more favorable in man coverage, so communication will have to be key. One of the safeties will have the tall task of guarding Ravens tight end, Mark Andrews, as their linebackers will be primarily used in stopping a Jackson run. 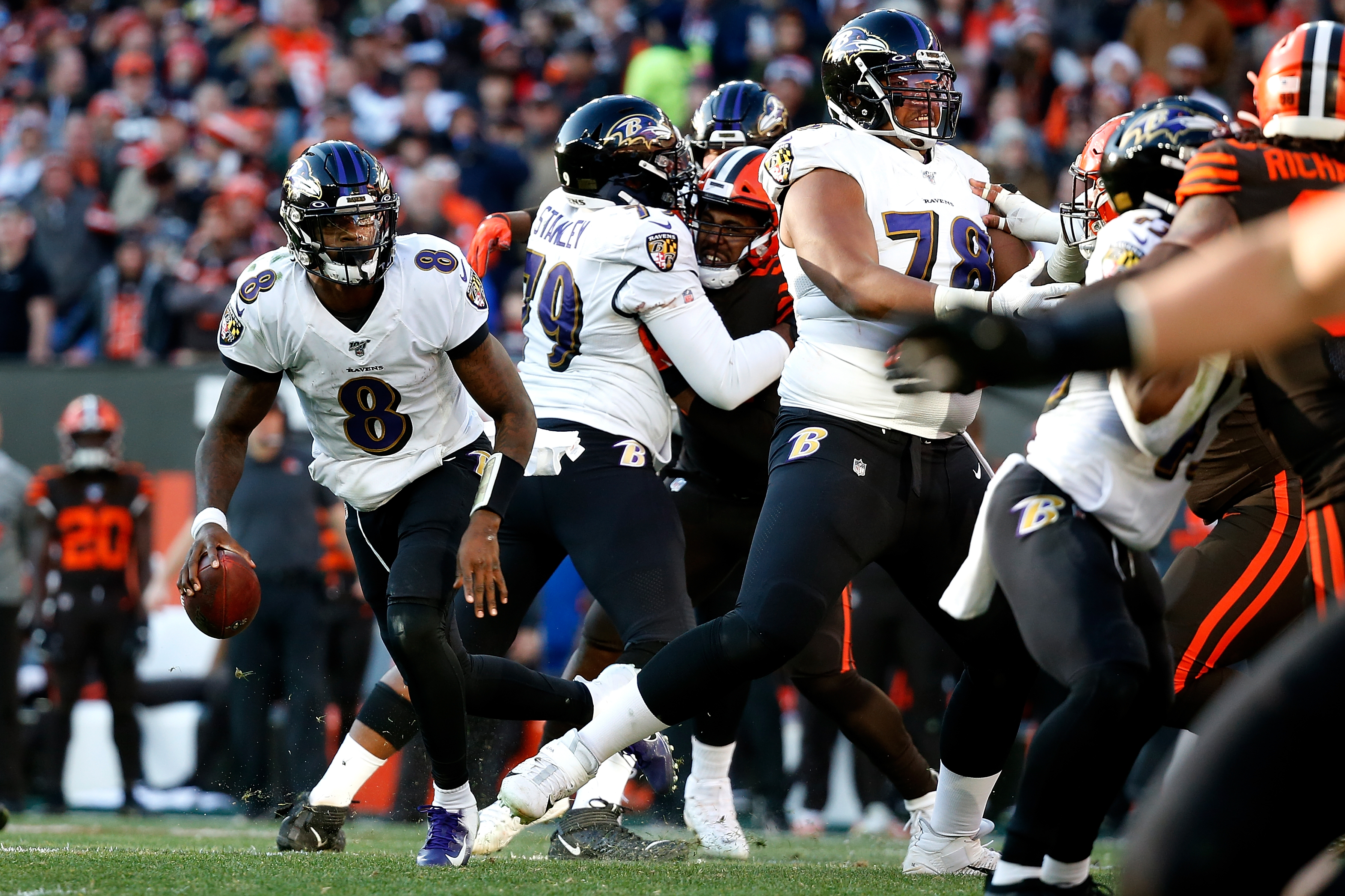 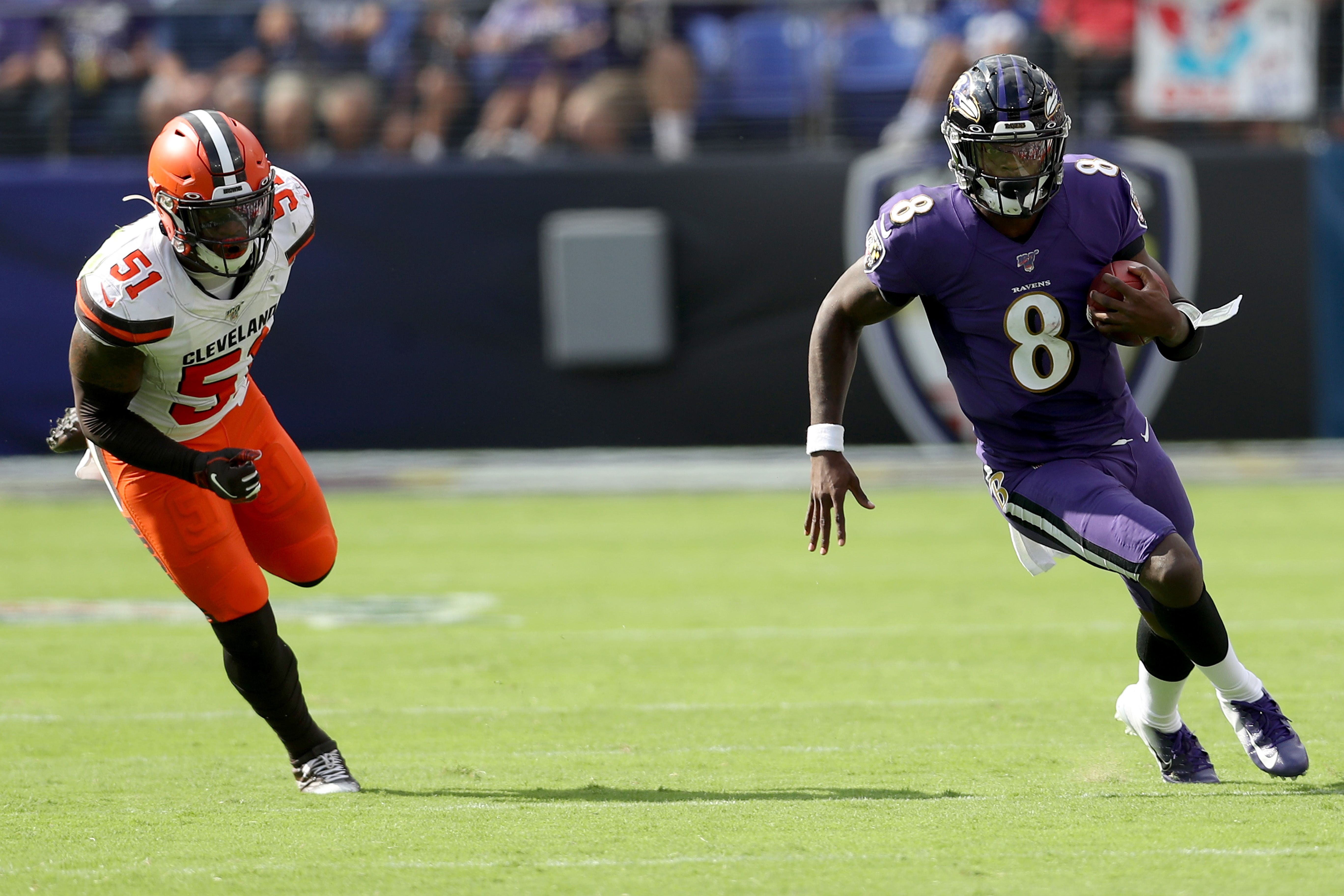 Look for defensive coordinator Joe Woods to call a relatively bland game as sending multiple blitzes at Jackson can expose a lot of green field in front of him. However, the signal caller should create some disguised coverages and blitzes from JOK in order to make Jackson second guess his throws and if a running lane will be available.

The few teams that have slowed Jackson down used a lot of fast secondary players in order to stop him from scrambling. The 2018 playoff game versus the then San Diego Chargers proved that having the speed of the secondary used to stop the run, rather than linebackers worked in mitigating the scramble. The 2019 playoff game versus the Tennessee Titans proved that getting a lead and making Jackson playing from behind by throwing the ball slowed his scrambling as well. The Titans used RB Derrick Henry to control the game and the Browns can similarly use the punch of running backs Nick Chubb and Kareem Hunt, unlike the first matchup.

Collectively, the defense needs to win the early downs. Keeping Jackson in a third-and-long is imperative to make him have to throw in tight coverage. Stopping the called run plays by being disciplined in their assignments will force Jackson into more obvious throwing downs. Offensively, winning the time of possession and gaining a lead will help this as well.

Are the Browns able to slow down Jackson and win versus Baltimore? Yes, but it is easier said than done as he continues to put up MVP numbers versus NFL defenses. The Browns built a defense in the off season to keep up with Jackson and the two consecutive matchups with the Ravens will be their time to shine.

Oh, the Ravens and Lamar - what can we say about them? I feel like the Ravens are not the powerhouse once believed at the beginning of the season. Mr. Jackson is a slippery sucker and he’s been known to be a running QB since he was in high school. He definitely figured out a way to keep Jadeveon Clowney frustrated and the rest of the defense on their toes.

The Browns’ defense can totally shut him down, but they need to go for his waist - not his legs. He’s hurdling and high-stepping his way out of just about every situation. We need to keep the pressure on and the five man rush, just as we did and make him uncomfortable. I think our secondary showed exactly what it can do. We did great by forcing four turnovers, but then it was our offense leaving us wanting more. I hope this bye-week helps, we heal and study, study, study. Because what the defense was doing was working. We just need our offense to show up.

We handle those outside tackles and keep Lamar in the pocket, I think our secondary is healing well enough now too that we can have all options covered. Myles Garrett will need a lot of oxygen to keep the pressure on, but I don’t think he’ll have too hard of a time finding his way to another sack.

I think this year is going to be easier than any other year to contain Lamar. With an absolute crippled backfield, it is going to make the Ravens one-dimensional.

He loses that option; short pass opportunity and I don’t fear being beat by Lamar’s arm. I think we split with Baltimore this year (meaning we must win in Cleveland now) KEEP HIM OFF THE FIELD and apply pressure. We contained him a week ago and should have won but the offense can’t get out of their own way. Blitz, blitz and then blitz some more.