Homegating on Halloween night for the Cleveland Browns vs. Cincinnati Bengals game

A look at some Browns-themed Halloween decorations.

Share All sharing options for: Homegating on Halloween night for the Cleveland Browns vs. Cincinnati Bengals game

The Cleveland Browns have the rare honor of playing on Halloween night this year, as they host the Cincinnati Bengals on the shores of Lake Erie. Although many fans will be down at the game tailgating, a lot more will be “homegating,” which means enjoying their pre-game festivities from the comfort of their own home, or someone else’s home.

We often see decorations that Browns fans include in their man-caves to enhance the homegating experience, but what about those decorations that specifically tie in a Halloween theme too? Let’s take a look at some creative examples. 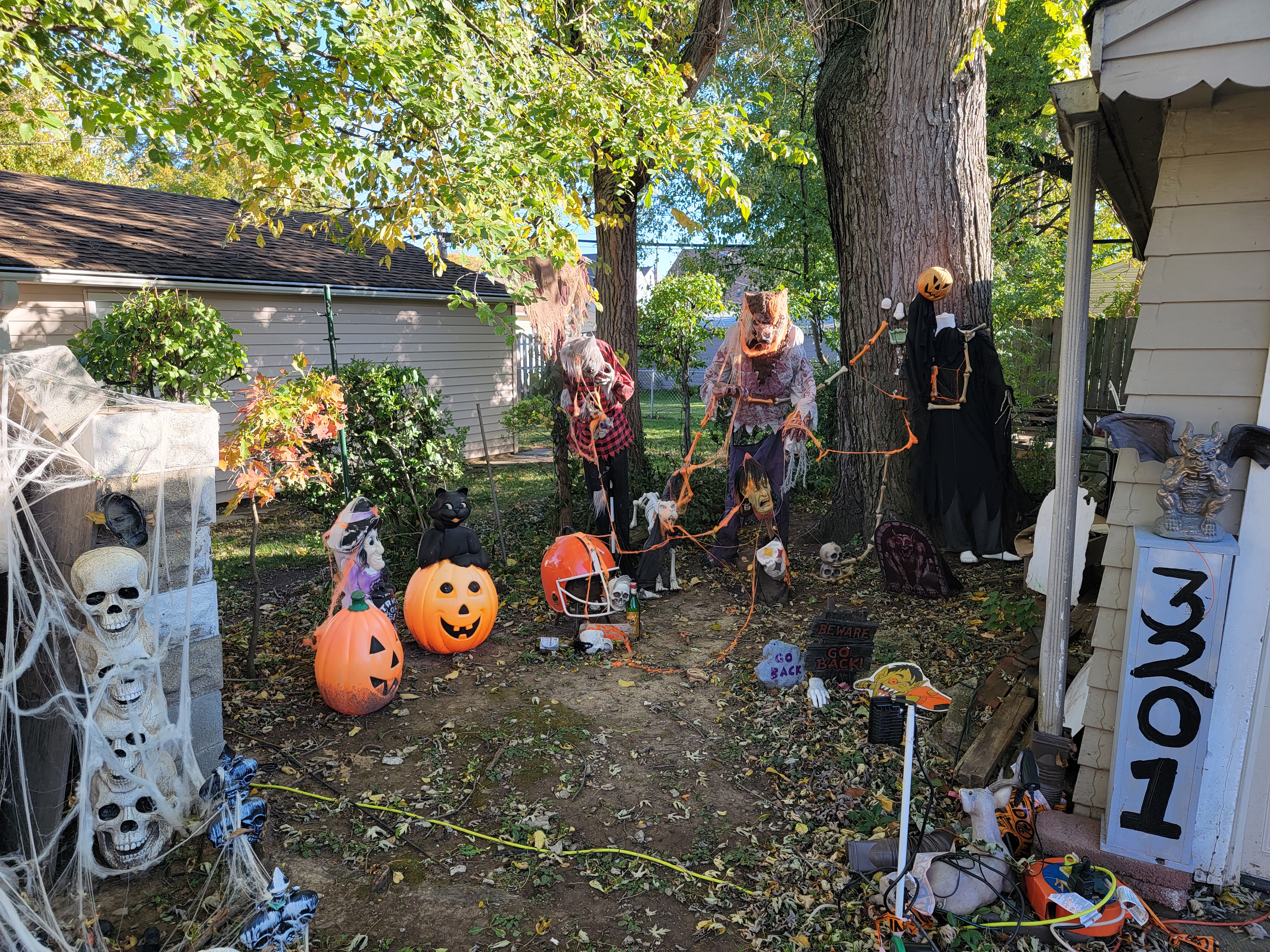 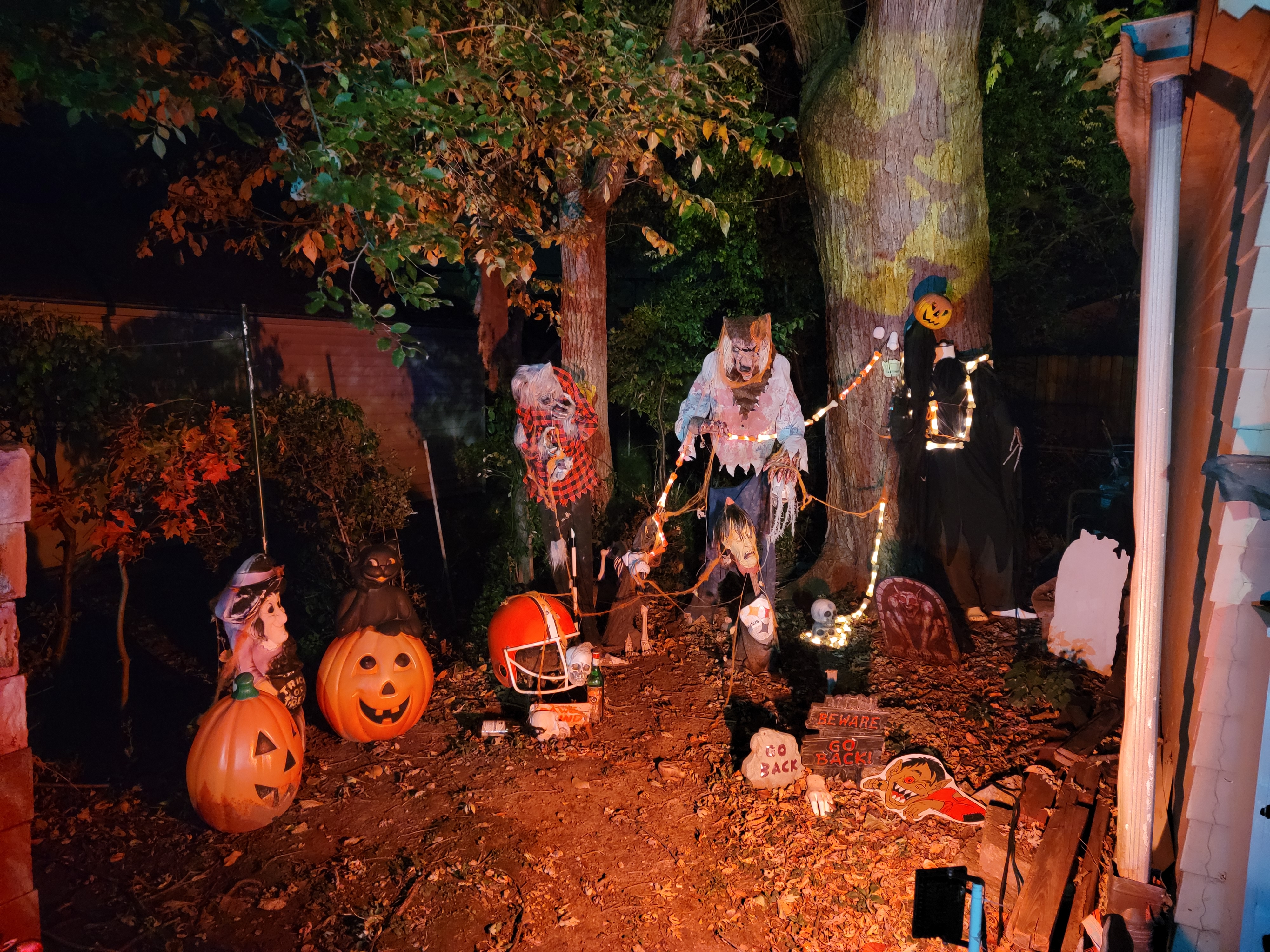 This first example comes via a couple of pictures I took at a Halloween house called “Hilariously Haunted Yard” in the Old Brooklyn neighborhood of Cleveland, Ohio. One component of the house was a Dawg Pound section, and the homeowner explained to me the details of the exhibit, saying that one werewolf is snickering at the 1990 Bengals/Browns bear, the dog is eating a raven, and then the Steelers are on a stake. If you use the image slider, there are daytime and nighttime shots of the scene.

Waiting for a Championship

As I was heading toward Parma, Ohio, from Old Brooklyn, I picked a random side street to go down and happened to stumble into this scene of a Browns fan who has been waiting way too long for a Championship — but they still have their megaphone in hand, with two skeleton dogs and a Browns flag flying above.

Here ya go. I call it waitin on a Super Bowl. pic.twitter.com/lVmCnfYcor

When I had this post in mind, I put a call out on Twitter for anyone to share a Halloween-themed Browns exhibit inside their house, and DBN fan @Sad_Since_99 posted an awesome one: Inside of his man cave are four Browns fans as skeletons, sitting at the bar and “Waitin’ on a Super Bowl.”

One skeleton in the first shot has a beer in hand, and in the other picture, you can see all of the typical emotions that Cleveland fans go through on any given Sunday: one is waving their hand as if to say, “You’ve got to be kidding me,” two of them are slumped over the table in sorrow, and the one at the end is just sitting with that blank stare, knowing this is all-too-familiar.

Last year, Browns DE Myles Garrett got in the Halloween spirit by having gravestones of the various quarterbacks he’d be sacking/facing throughout the season. This year, he’s continued his own “homegating” spirit by tying the Halloween decorations into one of his favorite shows, ‘Stranger Things’. Vecna has control of all the various quarterbacks. One fan posted this a few days ago on Twitter:

That appears to have been an early rendition of the final design, though. As you can see from the video shot by WKYC below, a team of people were putting together the final exhibit at Garrett’s house in Wadsworth, Ohio, which has a much more realistic-looking Vecna, Vecna’s clock, the Mind Flayer, and more. Check it out yourself:

I didn’t have time to venture out there myself, but there is a home in North Ridgeville, Ohio, that has an entire yard tying in the Browns and our AFC North rivals. Spectrum News did a video clip of it here, but the homeowner, Jeremy Davis, also posted a couple of pictures on Facebook.

You can see how the big dog or wolf has a Browns uniform on, but also a ripped off head that is wearing a Steelers helmet. In the yard, one sign says, “Steelers fans will be used for science experiments,” while another sign says, “Trespassing will get you cracked with a helmet.”

Awesome Browns Zombie — I Want It!

Last, but not least, on Facebook, a user posted a picture of a zombie wearing a Browns uniform that they added to their collection this year, noting that they purchased it at T.J. Maxx. I want one! But if T.J. Maxx is like Homegoods, those unique decorations often go quickly, and are also often off the shelves by the end of September.

As for the perfect homegating food, with the Browns playing on Halloween night, I think all of the staples like pizza and wings still fit the occasion, but you have to have some candy within arm’s reach, right?

Let us know how you plan to spend Halloween night watching the Bengals vs. Browns game, and any unique decorations or food you play on enjoying.