When will Deshaun Watson play for the Browns? This year? 2023? Ever?

There are too many questions that need answers with suspension looming

Share All sharing options for: When will Deshaun Watson play for the Browns? This year? 2023? Ever?

Enter the Deshaun Watson case. This has been ongoing and should resolve itself in the coming months, presumably before training camp opens.

Watson has been in Texas this past week with NFL investigators. When the NFL does an investigation, they usually depose and interview all parties in advance, and then bring in the player last. This is also the case with Watson’s situation.

When asked, nobody with the NFL said anything other than “no comment.”

Although the NFL has not discussed a solid suspension timeline if indeed Watson is suspended, the general consensus is about six games – but there’s also a chance that it could be more.

As it stands, Watson is facing 22 civil lawsuits from former massage therapists who have accused him of sexual misconduct and assault allegations. These suits have been put off until March 2023. None of these allegations have resulted in criminal charges, to date.

So far the league has interviewed several of the women who made allegations and filed civil suits. Watson began sitting for depositions in several of the cases beginning last month with his attorney Rusty Hardin.

Once the NFL has completed its investigation, they will determine if Watson violated the league’s personal conduct policy. If he did, they will propose a suspension at which point an independent arbitrator - Judge Sue Robinson – is then responsible for the decision. She is the lone voice that will review the league findings and determine whether he is guilty or innocent. 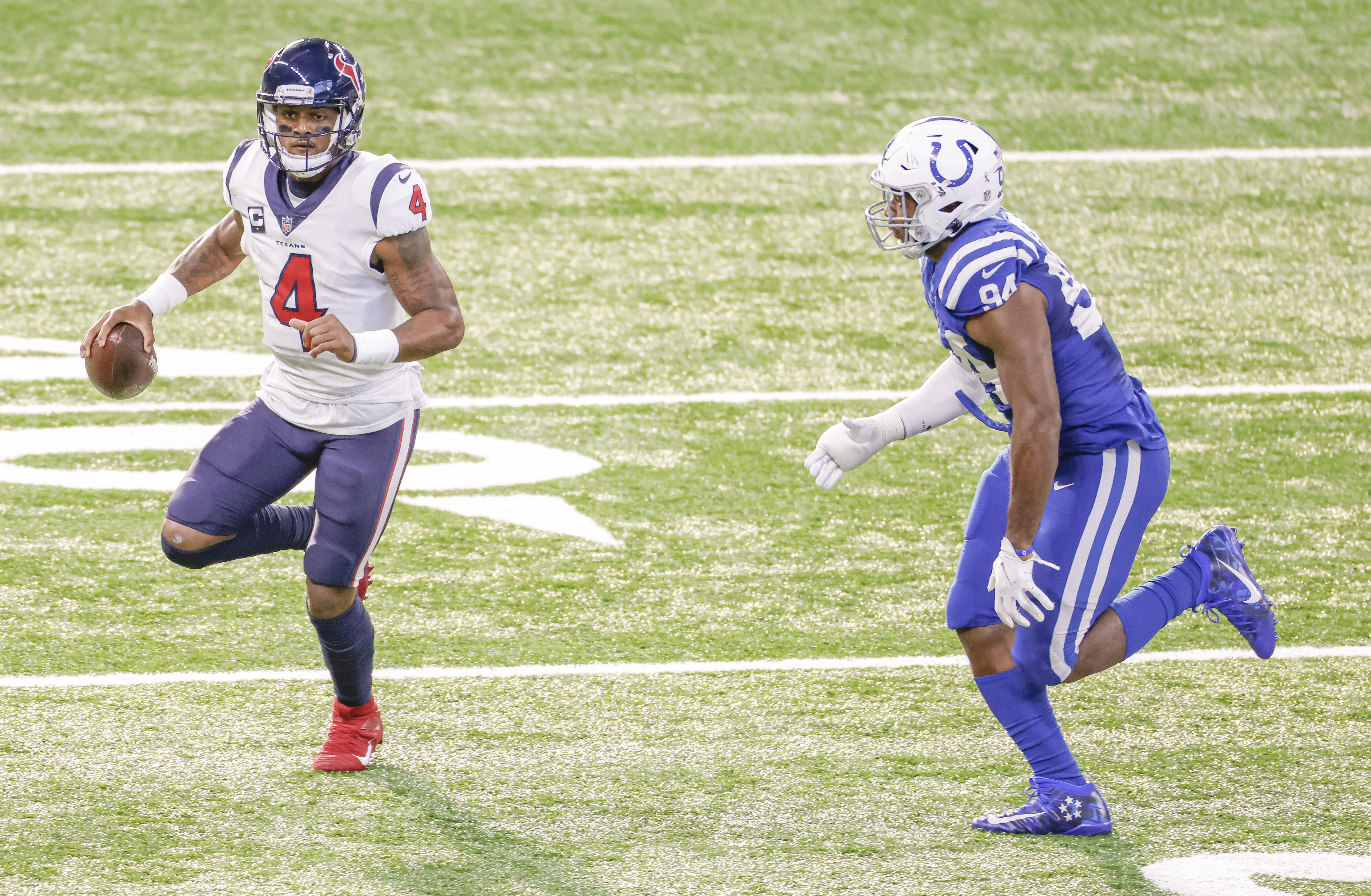 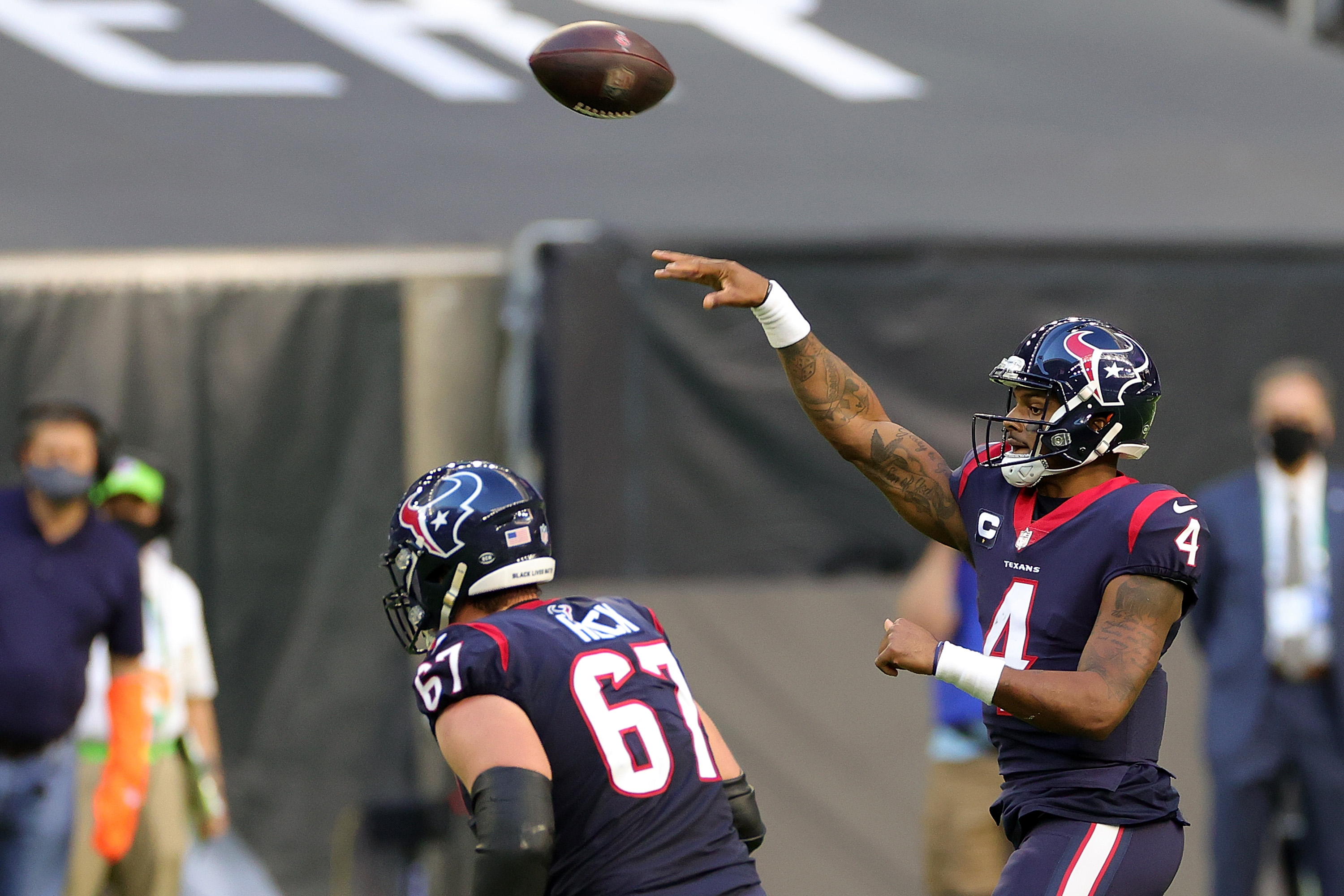 The last game Watson played was Jan. 3, 2020 in a 41-38 home loss to the Tennessee Titans. He went 28-39 for 365 yards with three touchdowns and a single interception. Houston finished 4-12-0 that year, but Watson made his third straight Pro Bowl. For the year, he tossed for 4,823 yards and passed for 33 touchdowns with just seven INT’s. All three were a career-high.

The 4,823 passing yards was the most in the league that year. His 2020 season was the best statistically for any quarterback in Houston Texans history.

If guilty, then what?

The judge can decide a punishment for Watson. However, the NFL does not have to abide by her suggestion and can appeal to Commissioner Roger Goodell. He would then make a final decision which could include not only a suspension but also fines.

There have been a lot of related occurrences in the past for the league.

Baltimore’s Ray Rice violently assaulted his fiancée in an elevator, in attack that was captured on video. He was arrested for assault, suspended and released from his team. He did not ever play another down in the NFL.

The Browns’ Kareem Hunt kicked a woman that was caught on security camera. His club, the Kansas City Chiefs, released him even though he was the reining NFL rushing champion. He eventually was signed by Cleveland but was given an eight-game suspension plus certain guidelines of when he could have contact with the team and when he could begin practicing.

Josh Brown admitted to an abusive relationship with his wife and was initially given a one-game suspension. His team, the New York Giants, then placed him on the commissioner’s exempt list while documents were reviewed. Eventually the Giants released him and he never played in the league again.

The belief has been that if any suspension is administered for Watson, it would be in the 4-8 game range.

The NFL and the Browns would like to have a resolution on the matter prior to the start of the 2022 season.

Watson’s contract contains modifications to the standard contract language that would void guaranteed payments or even his signing bonus. Basically, in the event of a suspension, there are built-in specifics that would protect the Browns.

Here are some specifics from Watson’s contract:

Each paragraph of the addendum to the agreement that contains guaranteed payments — No. 26 (2022 salary), No. 27 (2023 salary), No. 28 (2024 salary), No. 29 (2025 salary), No. 30 (2026 salary) — and the signing bonus addendum include language exempting from any potential default a suspension imposed by the league “solely in connection with matters disclosed to Club in writing pursuant to paragraph 42 and such suspension results in Player’s unavailability to Club solely for games during the 2022 or 2023 NFL League Years.”

“represents and warrants (except as disclosed to club in writing), as of the date hereof, that (i) Player has not been charged with, indicted for, convicted of or pled nolo contender to any felony and/or misdemeanor involving fraud or moral turpitude, (ii) Player has not engaged in conduct which would subject him to a charge, indictment or conviction of any such offense, and (iii) no circumstances exist that would prevent Player’s continuing availability to the Club for the duration of this Contract.”

What is the most interesting is that this new contract basically presumes that Watson will be suspended in some form in either 2022 or in 2023. Cleveland made that evident when they made Watson’s 2022 income just $1.35 million in order to make things financially better for him which would allow his overall loss to be less.

For any suspension imposed after 2023, the default language would apply, no matter what.

If Watson is found not at fault whatsoever, he will not face any suspension. Per the CBA, the NFL cannot appeal this decision from Judge Robinson. Another idea is that the league will determine that no suspension is necessary and the mere fact that he missed an entire season might be enough.

It just may be difficult for the NFL to allow Watson to play at all as long as these civil suits are pending.

MLB did very little to defuse the situation where Trevor Bauer was accused by one woman who alleged he physically and sexually assaulted her. In the end, the restraining order was removed, no criminal charges were filed citing a lack of evidence, and he filed defamation lawsuits against Deadspin and The Athletic for faulty reporting, plus a suit against the woman who accused him.

With that in the rear view mirror, the NFL certainly doesn’t want to be known as the league that views sexual assault as not something to be concerned with in regards to the star power of some of its players.

If Watson gets a full year suspension, the Texans will have been the early winners in the trade with the Browns. For at least a year, Cleveland would have it hanging over the that they paid out a ton of money for a guy who still isn’t playing while at the same time have alienated their starting quarterback (Mayfield) all in one failed swoop.

With the 13th pick they traded the slot away with Philadelphia for a first, fourth and two fifth round picks.

With the Browns currently in limbo regarding Watson, could that be another reason why they haven’t been so quick to release him? If Watson were suspended for a full-year suspension, could the coaching staff make the call to Mayfield instead of reaching for the new backup Jacoby Brissett?

Wouldn’t it be something if Mayfield could come back healthy, tear up the league, take the Browns deep into the playoffs and finally make the Pro Bowl?

However, the bridge with Mayfield has probably been scorched too badly to be saved. There is no doubt Mayfield feels used and abused by everyone involved the Browns - but if he wants to receive a paycheck every two weeks maybe it is still a possibility.

There could be upside for Mayfield in a case of playing. If Mayfield had a tremendous year, that would certainly elevate his value which currently is probably a fifth-rounder and a bag of footballs due to his contract. In 2023, he is going to hit free agency anyway. It is in his best interest to prove the front office naysayers wrong and demonstrate he is a top quarterback in this league and hopefully get a good contract with a great windfall. Otherwise he is facing getting a one-year prove it deal from a club that has a starter already in place and needs a quality backup.

Would Mayfield accept these terms from the Browns? If he sits home and sulks he doesn’t get paid. Plus, he does not build his value back up as a starting-caliber signalcaller in this league.

If Watson only receives a 4-6 game suspension, the Browns will be in decent shape. If there is no suspension, then it will be the best-case scenario for them, not having to call upon Brissett or worrying about how to handle the Mayfield situation..

If this whole situation crashes down, the Deshaun Watson trade could become the worst mistake by any NFL team since the Dallas-to-Minnesota Herschel Walker trade.

Cleveland has prepared for the fact that Watson may well be suspended, but for how long will have significant ramifications on at least the upcoming season.

For the next five years, Watson and the Browns are married. The only unknown is exactly how much playing time he will actually have in these upcoming seasons. The NFL is expected to meet Watson again according to a report by Mary Kay Cabot of cleveland.com.

At the same time, the Browns and Mayfield are still technically married as well. If Cleveland is staring at a 17-game hole at quarterback then they must have their old beau at the helm. To Mayfield, the entirety of 2022 would be a season-long job interview no matter how awkward the situation is.

Watson will have to display to the system that even though he was accused, he has done nothing wrong.