Share All sharing options for: Paging Donovan Peoples-Jones. Calling David Bell. Anyone there?

Cleveland’s offensive line is one of the best in the league. That fact has been placed on full display so far this season.

The questions that needed to be asked have been answered regarding whether center Ethan Pocic can hold his own against much stouter defensive tackles; and also who could fill that void at right tackle when starter Jack Conklin wasn’t exactly ready to come back into the fold. Second-year man James Hudson did an admirable job filling in during the first two games before Conklin was able to play in Week 3 against Pittsburgh.

Running back Nick Chubb is in his familiar spot as the NFL’s leading rusher. The other head of this duo beast, Kareem Hunt, is a spark plug. Although he doesn’t have the amount of snaps and carries as Chubb, he has shined when given minutes.

What would this offense look like without a fullback? That too has been answered. The role has either been filled by backup guard Hjalte Froholdt, or there hasn’t been a need for one.

And the new starting quarterback Jacoby Brissett is performing much better than most have expected. The tight end group finally showed up for a game against Pittsburgh to which David Njoku had pleasant numbers plus scored his first touchdown of the year. Harrison Bryant is holding his own and is a key element with his blocking skills.

Cleveland is averaging 28.3 points per game which just happens to place them sixth best so far. Chubb’s league-leading 341 yards is a portion of the Browns league-leading total rushing yards of 572. While scanning the NFL rushing stats, the Browns are on top in every category or very close to it.

That should cover the offense, eh?

This is an area that so far has been a roller coaster. Yes, the Browns want to run the ball down every opponent’s throat, and so far this year they have done exactly that. But every offense needs to toss the ball and gain not only huge chunks, but stop the all-out business of jail break rushing the quarterback.

Cleveland is 27th in total passing yards with 596 yards. The franchise has the seventh fewest attempts (92), ninth fewest completions (61), ranked 18th in passing touchdowns (4), 30th in pass completions of 20-yards or more with five, only a single interception, but is ranked 9th in pass completion percentage at 66.3%. Brissett’s PFF rating for the first three weeks is 78.7.

Brissett has done a very good job at completing the short passing game but has yet to toss the ball deep. In fact, Cleveland is one of several clubs that has zero pass completions of 40-yards or greater.

A look at the receivers is a glance at what must improve to assist the passing game.

The biggest surprise for the last two weeks is the player who is supposed to come up great each game: Amari Cooper. In Week 1 against Carolina, Cooper was the Invisible Man in that he had only three receptions for 17 yards. And get this: just five targets.

Thankfully the play caller, head coach Kevin Stefanski, began to incorporate Cooper more into the game plan during the next two weeks against the New York Jets and Pittsburgh Steelers. Which is what this offensive passing attack had envisioned when Cleveland traded him from Dallas this past off-season. The talented athlete came equipped with four Pro Bowls and five 1,000-yard seasons. 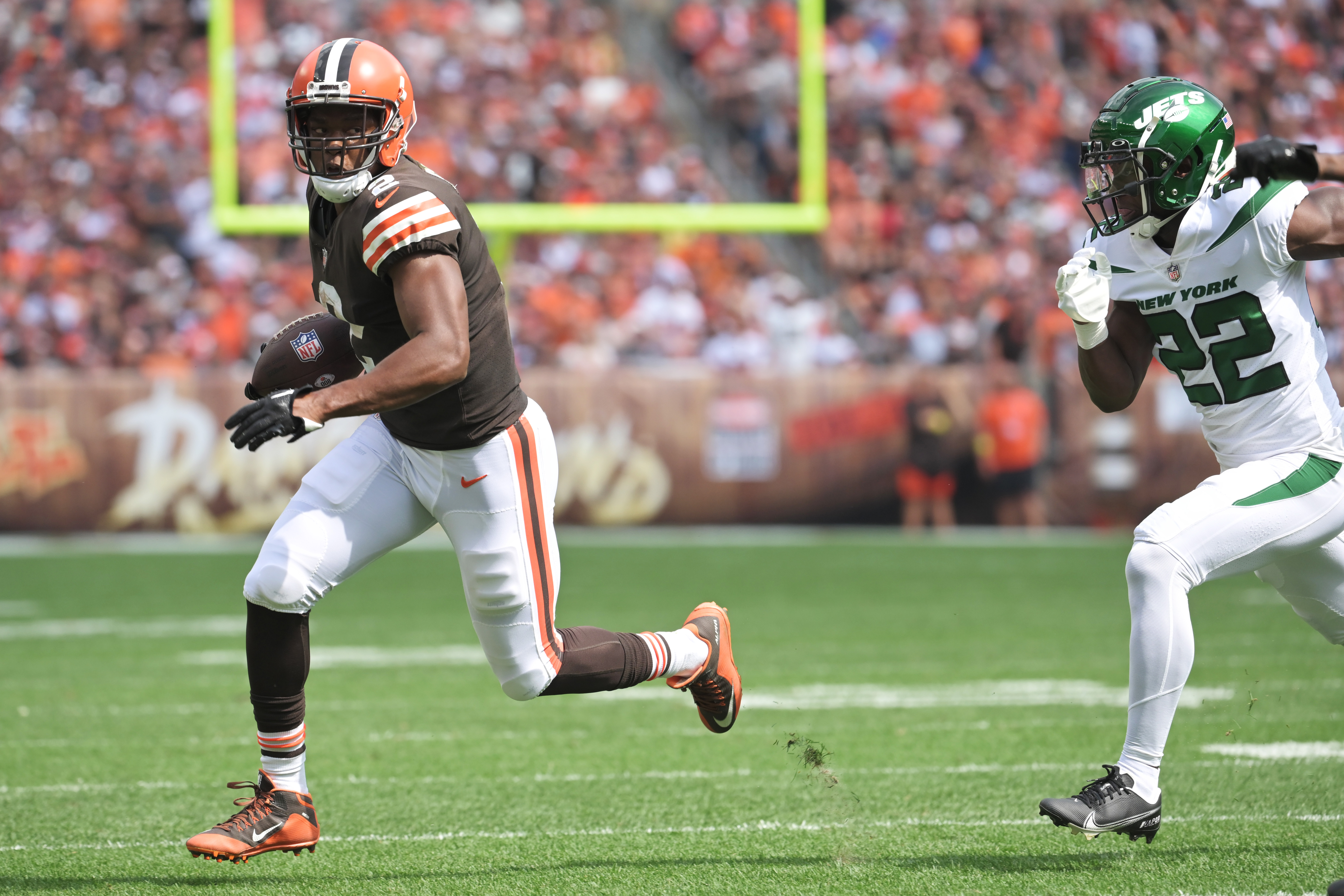 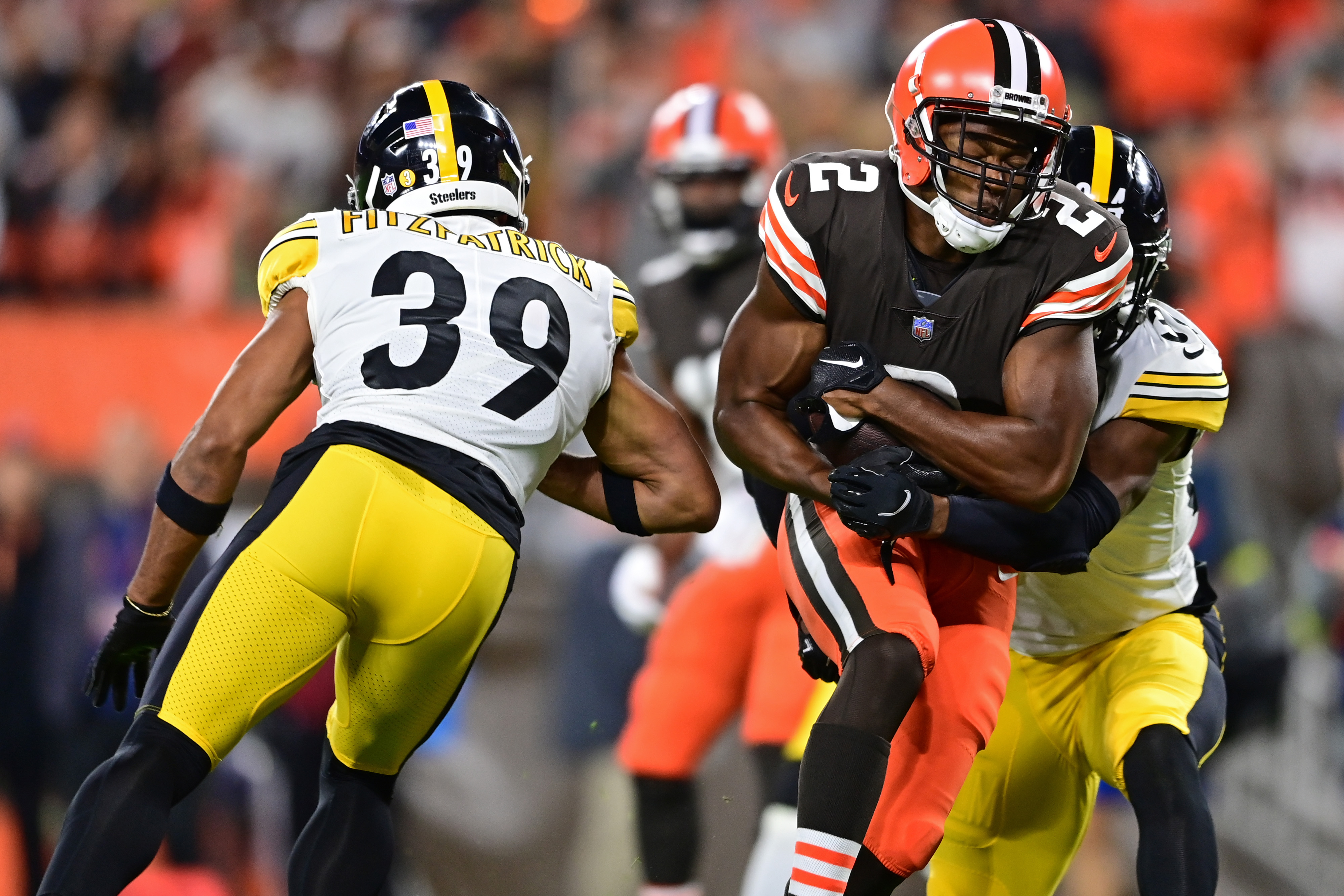 Against the Jets, Coop’s targets elevated to 10 to which he caught nine passes for 101 yards. But he didn’t have his first reception of the game until well into the second quarter. His catch with 7:34 left in the game was an exceptional grab blanketed by New York CB D.J. Reed. He also had three catches for first downs that kept drives going. He did muff the onside kick, but his participation in the passing game became a coming-out party with his new team.

In the Pittsburgh game, Cooper time-and-time again bailed out the Browns.

With 8:43 left on the clock in the third quarter, Coop made a nice grab and then tip-toed down the sideline for a huge gain of 28-yards with most of the yardage after the catch. To begin the fourth quarter, he ran a great route on a assumed Chubb run play as the Steelers stacked eight in the box. The result was a 32-yard gain. He should have had the Brissett bullet pass with just over five minutes to play in the game facing a third-and-12 but misjudged the path of the ball which hit him in the facemask. Cooper finished the game with seven receptions for 101 yards. His targets increased to 11.

But while Cooper has found some rhythm and continuity with Brissett, the other receivers in this group have fallen off the face of the earth. The premise behind a balanced passing attack is just that: balance.

Donovan Peoples-Jones came out of training camp as the undisputed WR2. This was envisioned as Cooper and the youngster DPJ snagging passes when the run game needed to throw, especially on third-and-long situations. He had shown improvement from his rookie campaign to last season and has good speed running a 4.48 in the 40.

In the Carolina game, DPJ was invaluable. Despite catching just six passes for only 60 yards, many of his catches were at critical junctures. In the second quarter with the Browns up 14-7, DPJ caught two passes on consecutive downs including a 15-yard scoop on a third-and-9. This allowed the drive to continue which concluded with Hunt’s 24-yard touchdown scamper.

DPJ was targeted the most in this contest with 11, but three of those passes were short-armed by Brissett under duress including a key third-and-9 with 2:24 left in the game. If completed, Cleveland could have run out the clock. As it was, the Browns punted which gave Carolina the ball back instead and almost came back to win.

In the Jets game, DPJ was thrown just one pass to which his stats were zero catches for zero yards. He had just one catch in the Pittsburgh game for 10-yards. Quite a turnaround from being the lead receiver to four targets in two games.

When David Bell was drafted in the third round of this year’s NFL draft after a sterling career at Purdue including named First Team All-American, the vision was a true slot receiver who had plenty of college experience in a tough conference. After a very good training camp, Bell has been the odd man out with just two targets, two catches for a total of 12-yards for three games worth of work.

The speedster Anthony Schwartz and Demetric Felton aren’t getting looks either as their totals are one reception for 19-yards and one catch for three yards, respectively. The rookie Michael Woods hasn’t caught any balls to date.

The Browns are content that Brissett and Cooper have found their groove. And it has grown over the past two games.

But a team cannot dedicate their entire passing game onto a single receiver. All a defense has to do is place their best cornerback on him with a safety over the top and basically take him out of the game plan completely.

The Browns are going to run, but need the passing game to become its own entity as well. Throwing the ball is crucial to any club in this league.

What should we expect from Cleveland’s passing game over the next few games?

Stefanski must find a way to get DPJ more involved. He has exceeded expectations with this team despite being a late round draft pick. He has a long reach and is an exceptional route runner.

Going into this year it was Stefanski’s goal to have a more vertical attack. The fact that defenses will consistently stack the box on the Browns offense, this can only open up better opportunities to gain valuable yardage with limited secondary players aligned on defense.

Last season Chubb faced an eight man box on 26.32% of his carries. That equates to a defense having minimal faith in the Browns’ passing game.

Cleveland needs more downfield throws to make defenses stop the practice of bringing their safeties up. Cooper, DPJ and Schwartz have amazing speed so why not test the deep zone more? Of course this means this offensive line (which was built to run the ball) must go into pass blocking mode – a trait they have had some issues with.

Cooper is one of the league’s leaders in Average Targeted Air Yards at 11.1. And his Average Cushion is 5.6 yards which means he is getting open.

With Njoku being utilized more in the passing game, this should break it open for a receiver or two to find the soft zone and get more involved.

The fact is, the Browns need the passing game to improve and hold its own. To date, Cleveland has run 61 times and passed 63.

But when you look at the stat sheet, the run game has been dominate while the passing attack has lagged behind.