Reading a Defense from Your Couch

Share All sharing options for: Reading a Defense from Your Couch

As you can tell from the title, this post will provide some tips on reading defenses without watching coaches’ tape. But before someone can recognize coverages on TV, they have to know what coverages look like in the first place.

One last detail: NFL defenses disguise their coverages before the snap. And they're good at it. So a word of advice: wait until right before the snap or just after the snap to make your read. It is best not to watch where players are, but rather where they go.

This is a pretty rare form of coverage, especially in the contemporary NFL game where passing attacks are usually lethal. A 0-high coverage will almost always be played behind a huge blitz: a defender will cover each receiver in true man to man coverage, while everyone else blitzes or plays an underneath zone. The "0" means that no coverage defenders will be in deep zones

2-high coverages are played with (at least) two defenders in deep zones, and both safeties back away from the line of scrimmage. These defenses include Cover-2, Inverted Cover-2, Cover-2 man, and Quarters (aka Cover-4).

1-high coverages are played with a single high safety somewhere near the middle of the field. These coverages mostly include variations of Cover-1 and Cover-3, and for the sake of this article we can throw "Tampa-2" and Quarter-Quarter-Half in this category as well.

Despite a large amount of variation and complexity within these basic coverages, these are generally what you see on gameday.

The amount of safeties you can see will help tell you if the coverage is a 2-high, 1-high, or 0-high look. Because of the broadcast camera angle, you will not be able to see safeties in deep zones (usually). If you can see both of the safeties--especially up near the line of scrimmage--it is probably an all-out blitz. If you can see one safety, you are probably looking at a 1-high coverage. If you can’t see any safeties, you are probably looking at a 2-high coverage. This method can fail, however, when defenses "roll" their coverage, like they do when they play a "cloud" type of Cover-3 or "inverted" variations of Cover-2 (both pictured above), or a coverage known as "two-trap." 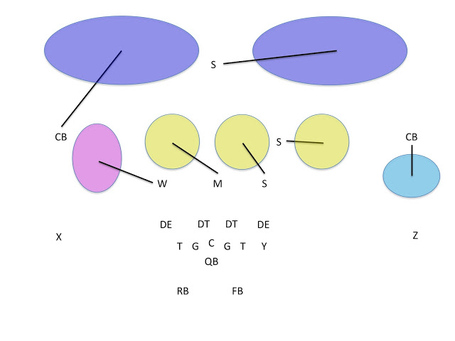 Corners are some of the best "liars" in the business, so they are often best read just after the snap. Corners have several techniques they can play, but they can loosely be classified into "off" coverage or some sort of "rolled up," "press," "tough," or "cloud" coverage. Combining a read of the corners and safeties can tell you a lot about the coverage. Specifically, by looking at those 4 players you can tell what the shell of the coverage will be.

1-high with corners up: 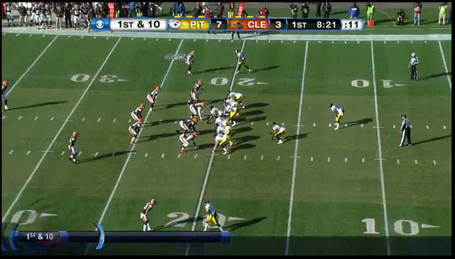 1-high with corners off: 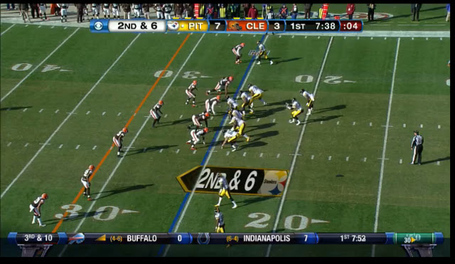 Note: Sheldon Brown appears to be up close to the line of scrimmage in the image above, but he bails into an "off" position immediately at the snap. 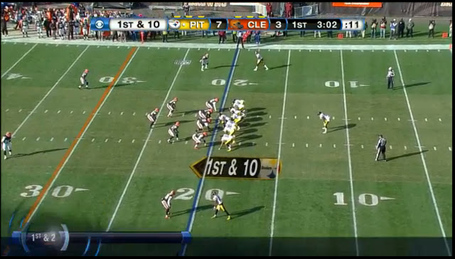 From the TV angle, the linebackers are probably going to be your best clue as to whether the coverage is man or zone. So when the corners are off and there is one safety deep, look to the linebackers to tell the difference between Cover-3 (zone) and Cover-1 (man) with soft corners. Do the linebackers drop back, away from the line of scrimmage initially? Does one of them run with the tight end? If the backs stay in to block or get into their pass patterns right away, what do the linebackers do in response? 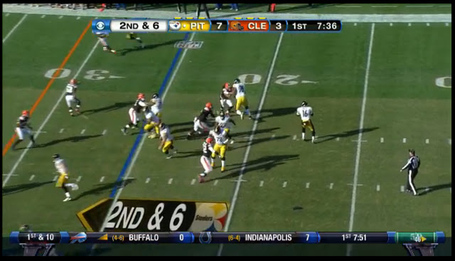 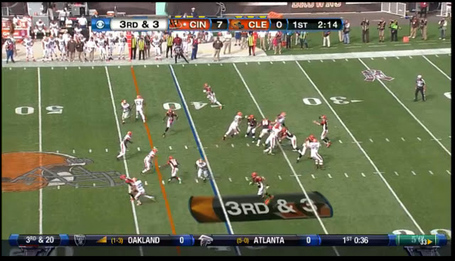 The biggest clue the linemen can give you is whether or not you are seeing a zone blitz, particularly some type of fire zone. Zone blitzes can come from anywhere, but usually result in a 3-deep 3-under or 2-deep, 4-under coverage behind the blitz. These coverages are close to Cover-3 or Cover-2, respectively, with one less guy in the underneath zones. If a lineman drops into coverage, you can bet that you are seeing a zone blitz. 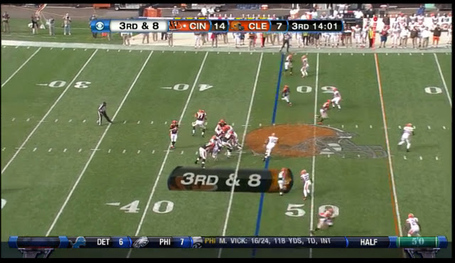 This is a 3-deep, 4-under zone blitz with Billy Winn dropping into a short zone in the middle of the Browns' logo. Note that several players look like they could be playing man (Sheldon Brown at the bottom of the screen, Buster Skrine just above him, and Joe Haden all the way at the top of the screen). The giveaways that this is zone are Winn dropping, D'Qwell Jackson bailing out to a deep 1/3 Tampa-2 style, and the slot defender to the top of the screen reacting to two threats in his area.

While the "All-22" will always provide a more definitive look, hopefully these tips can help you improve at reading the defense from the comfort of your own home.